Syfy is a serious condition, please consult your doctor immediately. 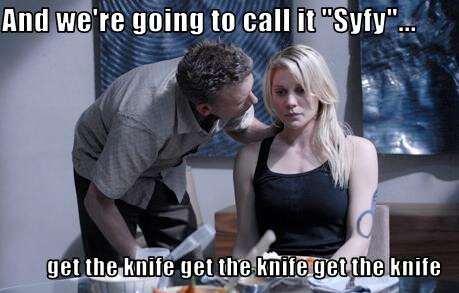 By now, you most likely have heard about the Sci Fi channel name rebranding.

I like how there’s a massive backlash going on around regarding the change, and for good reasons.

We spent a lot of time in the ’90s trying to distance the network from science fiction, which is largely why it’s called Sci Fi. […] But even the name Sci Fi is limiting.

Let me get this straight.
You want to change everything from your logo to your slogan, and from the brand to your core audience (you know, the one that made you what you are now). And do all that for absolutely no reason at all (given the channel’s top-10 network status)?

Distancing yourself from the SF pseudo-“geeks” just by changing the name and the logo is not going to get you very far, and it’s downright disrespectful.

The name Sci Fi has been associated with geeks and dysfunctional, antisocial boys in their basements with video games and stuff like that, as opposed to the general public and the female audience in particular.

I think you lost me there somewhere.

You can’t both loose your core audience (by literally insulting them) and at the exact same time try to make them stay to watch the very thing you lost them on.

That’s like saying you make quality science-fiction products and then you put Battlestar Galactica next to something called Spring Break Shark Attack.
Oh, wait.

You continue to perpetuate the very stereotypes from which you wish to distance yourselves. Instead of acknowledging what the literary and academic worlds have known for at least two decades, that SF is more than just “space, aliens[,] and the future,” you’d rather continue to sucker audiences in with lowest-common-denominator drivel and derivatives of ideas that intelligent audiences were calling inane ten years ago.

Many will tune out after the Battlestar Galactica finale.
I personally will continue to watch some of the “Syfy” original series (most likely not on the actual network though).
The channel has some great new shows coming up.
Namely Warehouse 13.

As for the other series, it’s funny how Sci Fi (or is it Syfy now?) tries to detatch and distance itself from what has come before the change.
And by that I mean they’re making spin-offs.

You want to rebrand yourself by trying to cash in on the same stuff you revile?
Way to go!

Sci Fi Channel’s attempt at rebranding is utterly ridiculous, especially when there is going to be massive rating drops starting next week.
Add that to spin-offs no one will watch because the audience is being dissed, and you get a total disaster.