Posts published in “One and Gone”

Some shows get years of success, while others barely get a few episodes to prove their worth.
Time to take a look at these oft-forgotten series and their single season. This is One and Gone. 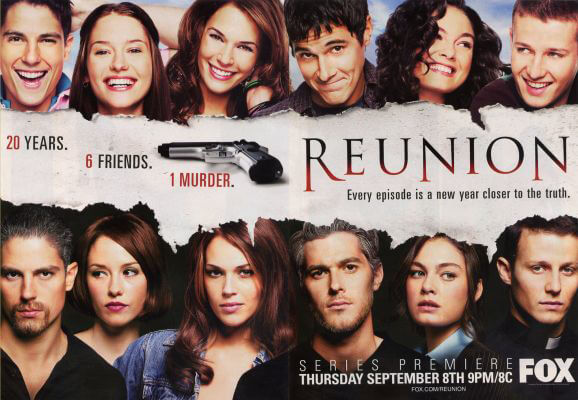 What was it about?

Breakfast Club meets 24, or The Big Chill meets Lost.
Each episode of Reunion follows one year in the lives of six BFFs, starting with their high-school graduation in 1986 and ending in 2006 1998 (following the cancellation of the show after only 13 out of 22 potential episodes).
The show also features the running (main) plotline in the present (2006) of a detective investigating the brutal murder of one of the six friends the night of their 20-year reunion.
It’s high-concept, it’s very soapy, and it’s fun to watch the same actors play the same characters in their 20s, 30s and 40s–all within the same season. Should have been on The WB instead of FOX.

When was this even on the air?

Fall of 2005 on FOX. On Thursday nights at 9 (versus The Apprentice and CSI). Ouch. Talk about a competitive timeslot.

13 episodes produced (out of a planned 22). 9 made it to air with the last 4 available online.

Created by Jon Harmon Feldman and Sara Goodman, with the former serving as showrunner. 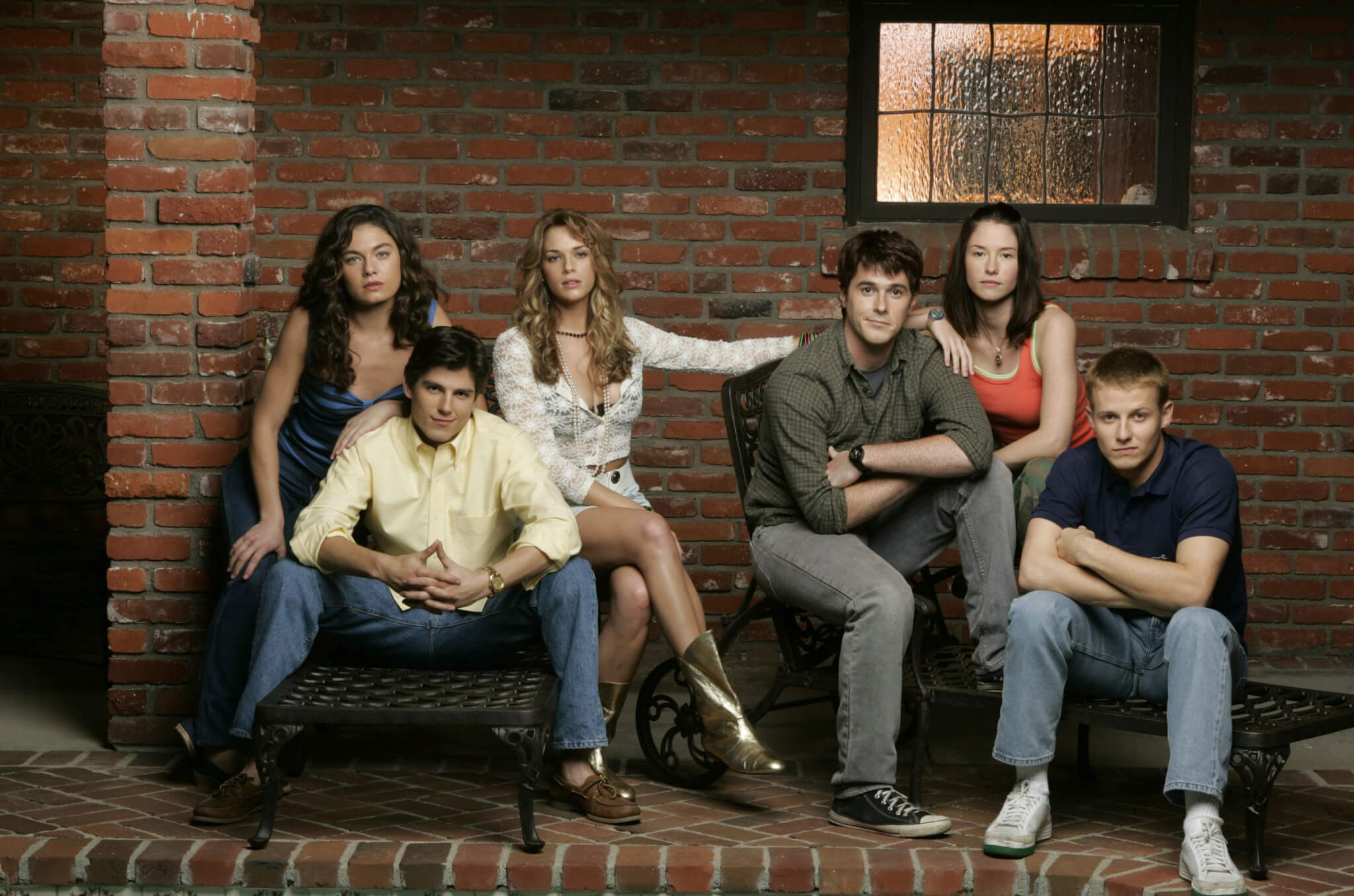 I’m a big fan of dramas that play with storytelling structures, especially when it involves time (see 24 or Lost), so Reunion theoretically fits right into my playground.
But was any of it actually good? Let’s take a look.

Present day
Before we get to the real novelty of the series, let’s take a look at the continuing narrative/arc of the season, which is entirely set in the present. To emphasize with the sunny past (I guess), we end up with some weird hyper-stylized present where everybody is a dead-eyed zombie living in a grey film-noir-esque world. Or something. (See the screenshots coming up)
This is a whodunit-style mystery about one of the six having been killed. Yet, halfway through the season, the present storyline starts to focus entirely on two characters’ involvement with the murder. In other words, the show stops featuring (and caring) about three of the five remaining friends still alive in the present.
Have I lost you already?
Now, what I’m describing already sounds like a terrible story, but the biggest disappointment isn’t that we’re seeing too much of the present; it’s that we’re actually seeing too little of it. The ratio of a given episode is about 80/20 in favor of the flashbacks, with the flashbacks completely overtaking the present in latter episodes. Why? My guess is that the last 2-3 episode of a theoretical full season would have prominently featured the events leading up to the murder (i.e. present-adjacent stories). Therefore, no need to talk about it before then.
Either that, or they realized how shitty the makeup looked. 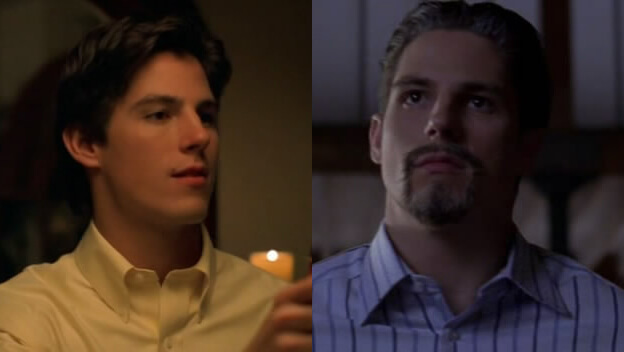 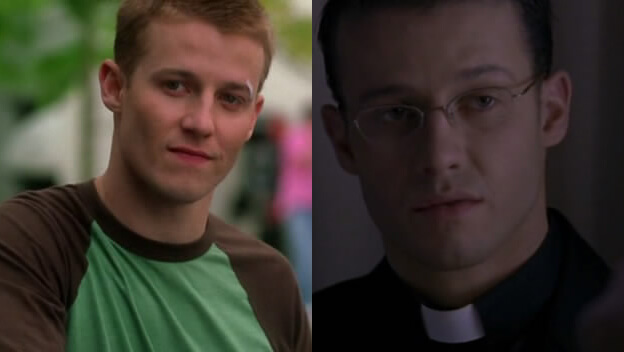 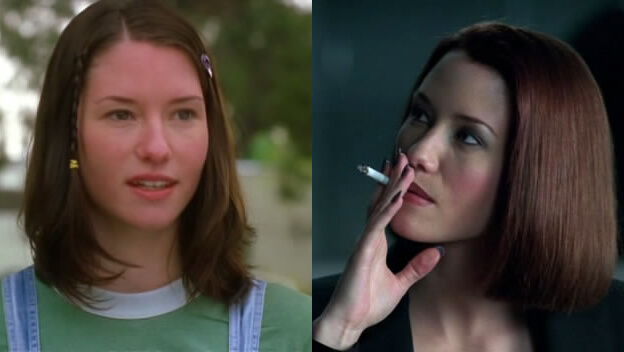 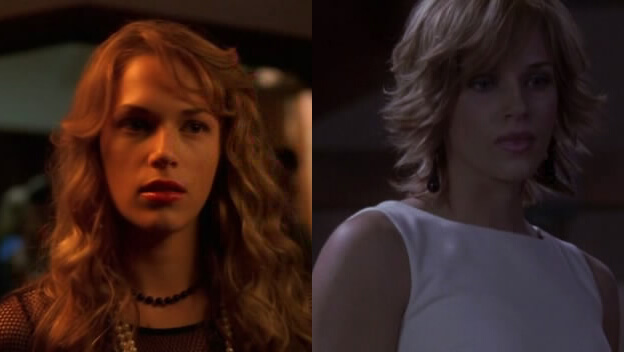 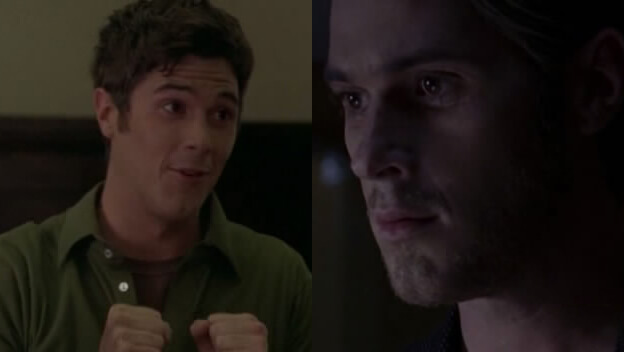 Meta jokes
Examples include:
– LOL UGLY 90s CELLPHONES!
– LOL INTERNET IS NOT THE FUTURE
– LOL OJ SIMPSON WILL NEVER MURDER ANYONE EVER

To quote the EW review of the time:

Even the ’80s scenes are weak because the writers are so taken with the setting, they can’t stop reminding us. Sloppily. One character calls Wham! ”the next Beatles”; another dances to ”Material Girl.” The gang dons double-layered polos, Frankie Goes to Hollywood-style T-shirts, and menswear-for-girls. In short, we’re never looking at ’86, or ’87, but an ’80s-world amalgam — and apparently anything that happened in that decade is game, even if it’s off by nearly 10 years.

Fortunately, self-referential humor isn’t the main point of the show. And past the 80s (i.e. the first couple of episodes), we don’t have to suffer through a lot of those inane references.

Some dialogue
Especially early on in the show, there’s quite a lot of bad lines (expositionary or other).
Here’s a frightful example from the pilot, said to the triangle love interest by her secret lover:

If Halley’s Comet’s coming back early for anyone, I think it’d be for you. <3

The characters
Less archetypes and more stereotypes.
They get fleshed out over the course of the half-season, but we don’t have the real satisfaction of seeing their complete evolution from walking clichés in the pilot (80s), to their more devilish counterpart in the present. Had the show gone on for a full season, I would assume this frustrating contrast would have been less jarring.

The music
Say what you will about the meta “time winks”, but I really enjoyed the music choices (at least past the pilot). Maybe it’s because I already enjoy the songs picked, but they ended up actually being relevant to the episodes’ content and featured scenes.

The actors
Again, despite the crappy makeup, you can’t fault the actors for doing their best and making some barf-worthy scenes just be cringe-worthy.
Special kudos to Will Estes, Dave Annable and Chyler Leigh for committing to some of these crazy storylines.

Time management
Apart from the present, the way Reunion handled the majority of each episode (i.e. flashbacks) was, in my opinion, a good use of storytelling.
Most episodes concentrated on a very particular moment within the year, and showcased through that lens the various events in the friends’ lives. Only in a couple of instances did they actually go through an entire year.
Either way, the “moments” they showed were the most relevant and illustrative of where the story was (as opposed to historical events). The writers chose to focus on the important events in the lives of their characters, regardless of when during the year they were taking place. This is in opposition to what they could have done: showcase historical moments within these years to cheaply entice nostalgia or emotions out of us. A pitfall that was avoided. 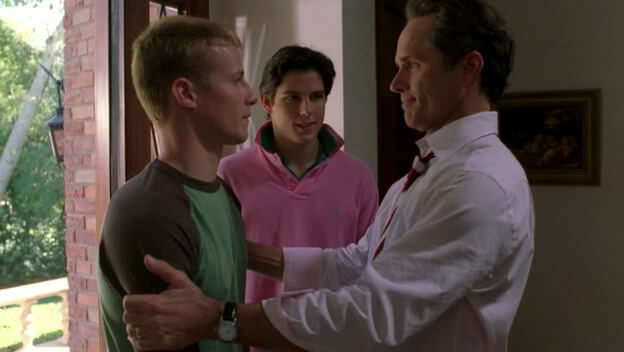 Pilot to finale: Evolution of a single season

Reunion started bad. Really. The pilot of the show probably has the most hackneyed soapy storylines you’ll ever see. But the cool concept made me stay past it.
The show was at its height of ridiculousness when, within the same episode, the 30-something actors were playing both teenagers, and grayed-out 40-year-old equivalents. As I said, the makeup is really distracting. The more egregious issues however, were the constant callbacks and “look at me” nostalgic moments of the pilot.
Cut to thirteen episodes later, where the majority of these issues are mostly fixed. Once you get into the 90s, there are only a few minor nostalgic references, and the wardrobe doesn’t look that bad. You’ve gotten used to the soap storylines, most of them having actually become relevant to the ongoing plot. The present, however, is still a major issue (see above). Still, an overall positive evolution for only 13 episodes.

Watch or let it die?

Eh. It’s hard to give it a thumbs up when there are a lot of loose ends by the end of the show. You definitely won’t get enough of a complete picture to be satisfied.
The concept is executed well enough for a night-time soap (past the first two episodes), but the murder mystery is dragged on far too long. Worst part is the lack of any conclusion or real payoff of any kind.
The showrunner himself has confirmed that the murderer’s identity and motive (which you can find online, since they weren’t revealed in the show itself) can barely make sense for “us”, given the lack of information from years 1999 to 2006. Key events are completely unknown to the viewers, which makes the entire present storyline irrelevant.
A complete 22-episode season would have been worth the time investment, but as it stands now, the unfinished Reunion will live on as a haphazard foggy memory of what could have been.
Kind of like high-school.
Get it?

P.S.: New around? You should start here.