The Watchmen case seems to be fast-tracked and as predicted Fox and WB are on the verge of finding common ground.
Do I smell settlement?

Meanwhile, some other news have been popping up the last couple of days.

The HIMYM cast got a raise on their paycheck.
HBO has renewed The Life and Times of Tim (yay!).
E.R. is never going to end.
Swoosie Kurtz is going to stint on (dare I say Bryan Fuller’s) Heroes.
Mad Men‘s season 3 is indeed going to premiere this summer. With or without Weiner, although there’s probably as well going to be a settlement.

On the Flash Forward front, Robert J. Sawyer (the man behind the original book) is often making comments on his own blog about the project and seems very pleased about it (as in the polar opposite of Moore’s feelings towards the Watchmen movie). 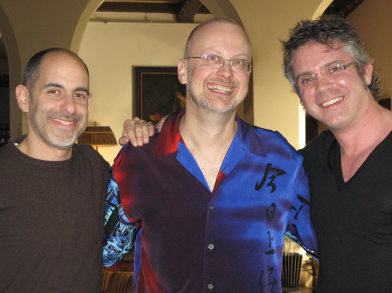 Sawyer has also confirmed the epicness of the show, comparing it to Lost, and how Goyer and Braga “have mapped out five seasons of Flash Forward” (110 episodes).
Rob Sawyer will as well probably write a couple of episodes.

Besides this, there is an interview out with David Goyer posted on SciFi Wire about the show.
Goyer tells that the season-format will not be too dissimilar to 24‘s as each year hitting reset and having its own flash-forward, with a glimpse of what is to come at the end of the preceding season.
I must admit I am kind of disappointed with that formula.
Heroes failed miserably and 24 really dragged on after the first couple of years.
But then again, those shows weren’t planned beyond the season.
Still, I would have preferred the one major flash-forward across several years instead of four that could ultimately reduce the magnitude of the first one.

The premiere is currently set for Fall ’09, with the first season starting to shoot Feb. 21.