I read the script last night for the über-secret science-fiction comedy Paul. The film is being directed by Superbad/Adventureland’s Greg Mottola and was written by Simon Pegg & Nick Frost.
Albeit long (120 pages), the story was so immersive I read it all in one go.

Check out this incredible cast: 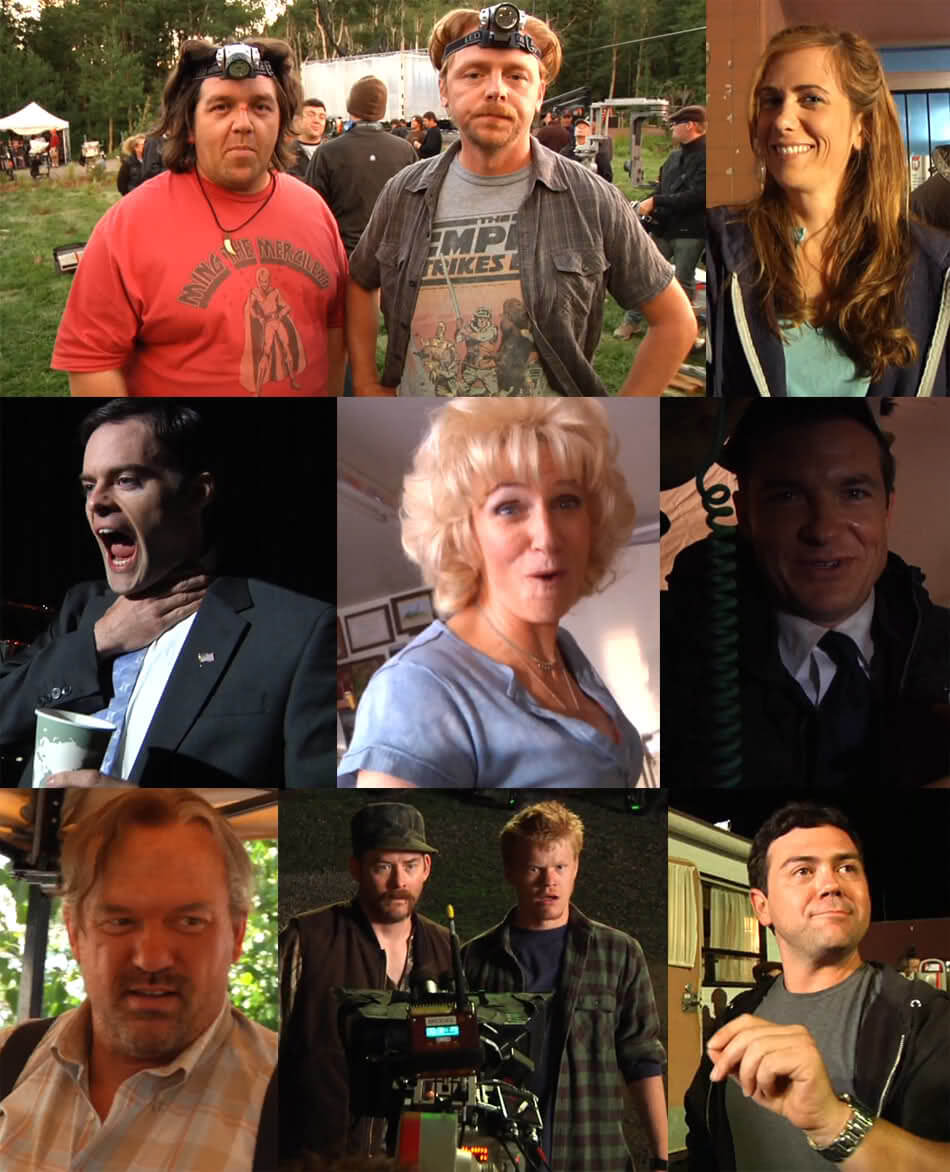 The movie is not part of Pegg and Frost’s “Blood and Ice Cream” trilogy (comprised up til now of Shaun of the Dead and Hot Fuzz).
Actually, Paul reverses the standard dynamic between the two by putting Frost as the lead and Pegg as the sidekick.

As usual though, they play the two main characters, respectively Clive Gollings and Graham Willy, two (sorta) stereotypical nerds. Clive authored Jelva, Alien Queen of the Varvak, a not-so-popular sci-fi book.
As they leave Comic-Con to visit Nevada’s Extraterrestrial Highway (and Area 51), they encounter, you guessed it, Paul the alien. Seth Rogen will “MoCap” the character. 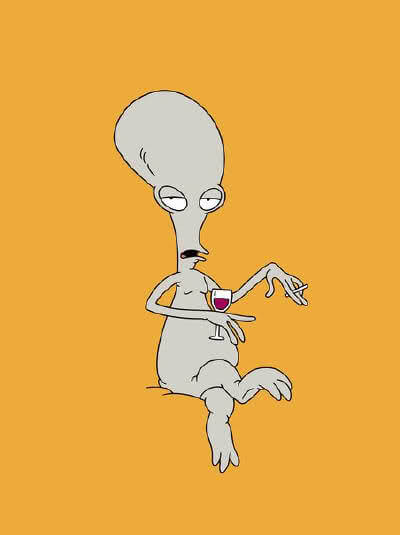 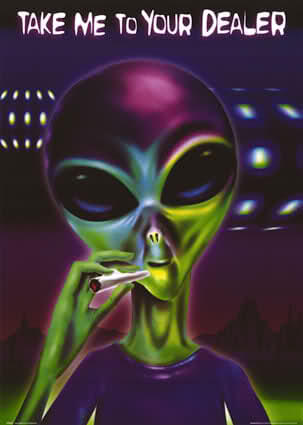 The Paul character would probably be best described as a cross between American Dad’s Roger and the “Take Me to Your Dealer” alien (the poster is actually referenced in the movie).
The former for his intellect and pop-culture knowledge, the latter for his physical appearance…and because he smokes pot.
I guess that’s why they chose Seth Rogen (ha, ha, ha).

Wiig will portray Ruth, a Bible thumper that is both smart (!) and knowledgeable (!!). She gets (somewhat) inadvertently kidnapped by the group. John Carroll Lynch will be her dad, neither smart nor knowledgeable.
Jason Bateman plays the main Secret Service Agent, Lorenzo Zoil. He is followed by two other agents, Haggard and O’Reilly (Bill Hader and Joe Lo Truglio). Jeffrey Tambor is their boss, nicknamed “The Voice.”
David Koechner and Jesse Plemons play Gus and Jake, two stupid meatheads while Jane Lynch depicts Pat, a waitress at the (real) Little A’Le’Inn.

As for Sigourney Weaver and Blythe Danner, I’m having a problem pointing out their role. While IMDb lists Weaver as playing Tara (the woman that pulled Paul out of his Roswell wreckage some 60-odd years ago), it seemed to me like it would fit more Danner (hell, Weaver wasn’t even born in 1947).
That said, I have no clue what the extra character is.

There’s also in the movie a cameo by a famous director (you might guess which), and as well a few scenes at Comic-Con.
At one point, Michael Biehn even makes an appearance (Clive is hoping to ask him if he feels that “the killing of Hicks and Newt in Alien 3, invalidates Ripley’s struggle at the closed of the previous installment.”).
Which makes you wonder what’s going on in the movie since Weaver (aka Ripley) has a role (not as herself), and there are no meta-joke about that either.

Anyways, now that you know the story and the characters, time to talk about the movie itself.
What’s interesting to note is how atypical some of the things in the script are.

First, regarding the obligatory references.
Pegg and Frost know their way around pop culture, so it’s obvious they’re having a blast when they write those nods at many SF movies/TV shows.
What is funny however is that those nods aren’t blatant at all.

For instance, there is at one point a Heroes reference (yes, that one).
Only, this is not a “Hiro/Claire” type of reference, it’s more, let’s just say, obscure.

CLIVE
She called her dog Paul?

Yup, they just talked about the Bennet family dog, Mr. Muggles (dare I say a detail on Heroes).

The same can be said about every other nod in Paul (regarding their subtlely).
There are Battlestar Galactica, Star Trek, and Back to the Future allusions, but they do not involve jokes around Cylons, Spock/Kirk or Hoverboards.
There’s even a Pokémon that gets mentioned (and no, not Pikachu or Mudkip)!
Other “tip of the hat” include (among many, many other movies/shows) The X-Files, V, E.T., and Encounter of the Third Kind .
By “tip of the hat” I’m not talking about reenactments (with one notable exception), rather verbal winks like above.
Some other references are even more subtle, and even more random.
Case in point with Jason Bateman’s character. He’s named Lorenzo Zoil, an obvious hommage to the 1992 film Lorenzo’s Oil.
I have no clue why they chose this particular movie though.

The characters from the movie are also (for the most part) actually smart. Even Ruth the Evangelical is, like I pointed out before, knowledgeable!
Obviously, she doesn’t believe in science, but at least she knows about it, and probably knows more about geography than our two hero nerds combined.

This leads me to my final point, and I know I’m burying the lead here, but Paul is a smart comedy.
Actually, it’s way smarter than it might appear at first glance.

If anything, it tackles really well the whole Religion vs. Science debate, mixing both comical dialogues with sensible arguments.
Here is just one of the numerous examples contained in the movie:

RUTH
How can he be from another world? There is only one world. Our world, created by God the Father.

PAUL sits down next to GRAHAM. RUTH whimpers.

PAUL
Look, if it makes you feel any better, my existence only disproves the notion of the Abrahamic, Judeo-Christian God, as well as all single earth theologies. Science still hasn’t categorically rule out the notion of divinity, even though evolutionary biology suggest the non-existence of a creator by probability alone.

RUTH
How could that possibly make me feel any better?

PAUL
Jesus Christ, I was just trying to be nice!

Hopefully, all those dialogues won’t lose their “serious” edge once they’re done by Seth Rogen.

Nevertheless, Paul has what many comedies do not have: both heart and brain (and the funnies). Here is an example of a good, funny, and smart, R-rated comedy (unlike that other one).
The incredible script coupled with, yet again, a great cast, makes me think this will probably be Pegg and Frost’s best movie to date.
As for its precise date of release, there is none yet, though it should come out in 2010. In the meantime, check out the many video blogs left on the official website.