In important TV news today was the NBC panel over at the TCA press tour. 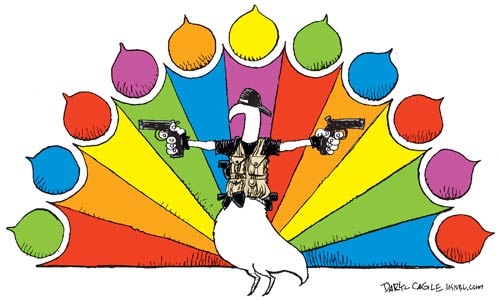 What a hilariously sad presentation by Angela Bromstad that was!
A few highlights:

To start us off, Bromstad blames the lack of any real summer shows on the fact that they’re not “on brand”. In case you’re wondering what the hell is NBC’s brand, apparently it’s a mix of 30 Rock and Heroes.
And I’m serious. Case in point with this quote:
Heroes is on brand, Office, 30 Rock, SVU… those live up to the legacy of what NBC has always stood for.

What especially got a big laugh in the crowd was her comment on Ben Silverman:

About Leno, Bromstad defines the show’s future success as depending on “a lot of things”. Are they going to declare victory whatever the ratings?
Clearly, the exec didn’t want to give straight-forward answers regarding Leno, Conan, or any of the shows.
But supposedly, they’ll take into account the whole 52-week ratings for the show.
I’m assuming now that Leno is going to be on during the whole year 5 days a week.
This is utterly crazy.

Regarding the rest of the shows:
Friday Night Lights didn’t have the ratings “to justify [it’s presence] on the fall schedule,” so it’s premiering during the summer. But didn’t you just say that summer shows are not really “on brand”?

Explaining why Kings got canned, she said:

In a really crowded marketplace, people want to know what something is about.

She also described the show as too “difficult” and “high-brow”.
The show can’t be sold in 30-second spots so it gets canceled.
How can you sell Lost in 30 seconds?
Or…The Wire?

Be wary of Southland‘s new season. Apparently, some “creative adjustments” were made. Also, the show is on Friday nights so probably no third season.

Speaking of, Chuck will most likely also get a summer ending. NBC knows that the fans are now ready to follow the show wherever it is like good lil’ puppies… Or so Bromstad implies:

We have talked about ‘Is Chuck something that we allow to run over into summer and be part of our summer programming?’ […] It is something we can move around.

Nice touch there.
The show not being a replacement of Parenthood instead of Mercy really show the Peacock’s confidence.

Oh, and Heroes is supposedly “is doing exceptionally well creatively” without Bryan Fuller.

And last but not least, don’t except a second season for the future-event show Day One that premiers around the Olympic Winter Games next year.
Says Angela Bromstad:

We’ve always looked at ‘Day One’ as a big event for us and not necessarily a show that would be a returning for a second season. The serialized nature [of genre shows become] tougher to sustain on broadcast.

Did I forget to point out that Jesse Alexander says Day One is such a serialized show that he compares it more to Fringe, X-Files and even China Beach than, say, Lost or Alias?
And, indeed, the pilot really tends to imply that the show will be more “crisis of the week” à la Jericho (first half of Season One) than huge mythological cliffhangers.

NBC without Silverman seems all too familiar…

NBC makes me laugh (at it)