Profiles of Television is an ongoing interview series showcasing the variety of professionals in the TV industry, from writers and producers, to those in development, representation, and post-production. These are the many talents involved in television, and the personal journeys behind them.

Today’s guest is Kiyong Kim. A multi-talented comedy writer, he had the opportunity of working through two amazing fellowships (Nickelodeon and NBC’s Writers on the Verge) as well as currently participating in the CAAM mentorship program.
Let’s see what he has to say.

First things first: why the television calling?
Originally, I wanted to write features. I had a writing teacher who suggested I try writing for TV, which I had no interest in until The Office came out. It was different, and I felt like I really got that show and the sense of humor. There was a sadness to the show that I really liked.
Around the same time, someone I knew got into the Nickelodeon Writing Fellowship. Until then, I didn’t know these fellowship programs even existed. I saw that as an entryway into television that didn’t really exist for features, and I thought I should try.

Three words to describe what you write.
Comedy without heart? Though I’m trying to add some to the pilot I’m working on now.

Three words to describe how you write.
Structured, because I like outlines. Slow, with pilots. And then—what is one word to describe when you’re on the verge of quitting? Whatever that word would be is the third word. Despair?

Name—
—the television series that has influenced you the most:
The Simpsons for the sense of humor. I’ve been watching it from the beginning and I still see the latest episodes, even in season 20-something. It influenced a lot of people. What it did really well was make good use of the medium of animation, unlike something like King of the Hill which could have basically been live-action.
And again, The Office as the show for making me actually want to write for TV.

—the one episode of television that defines you:
I don’t know if it defines me, but I thought about it a lot, and that Red Wedding episode of Game of Thrones was something else. I saw those YouTube videos of people freaking out while watching that one crazy scene at the end. People started crying, screaming, and throwing things at the TV. Seriously, people don’t react like that when people die in real life. It was a great reminder at how much impact a story can have.

—the television episode that impressed you the most:
Recently, the season finale of Silicon Valley was pretty amazing. Before that, the ‘Chaos Theory’ episode of Community.

—the show you wish was still on the air:
I liked Happy Endings. I was disappointed it got cancelled.

—the show you would never publicly admit to watching, except right now:
SpongeBob Squarepants.

—the show you wish you had worked on:
Friends. It’s still funny. I watch reruns now and it holds up. So many shows since then have tried to recapture that. Each character was so distinct and likeable. 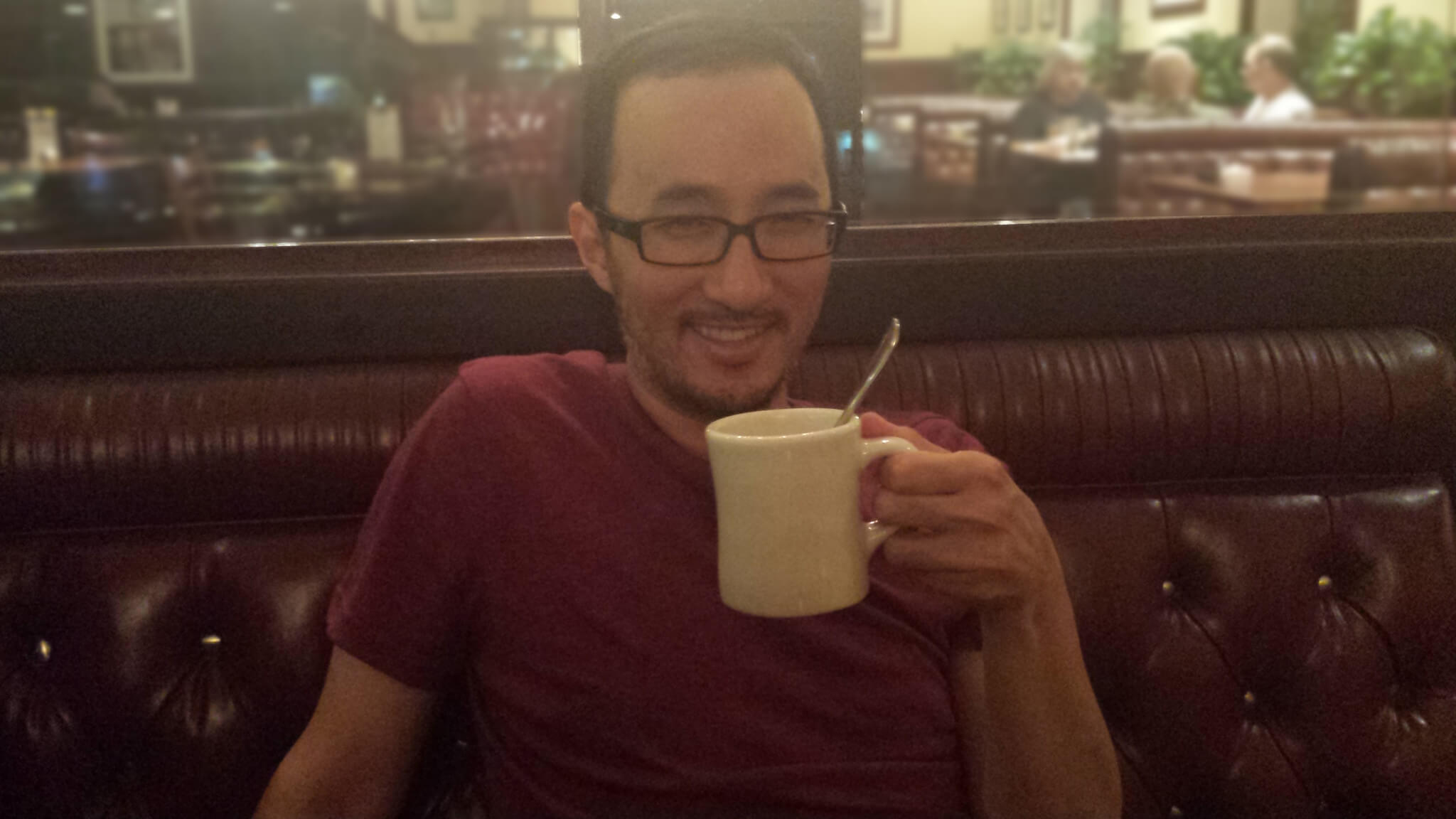 What has been, so far, your journey in the television industry?
I did web design for years and years despite never wanting to do web design. On nights and weekends, I was making short films and was thinking of writing and directing a feature soon. Around that time someone I knew entered the Nickelodeon Fellowship.
I had meant to write a spec for a while, so I wrote one for The Office. I made it to the finalist round but didn’t get in that year. The next, I tried again, and got in.
I learned a lot at Nickelodeon but didn’t get staffed. The following year, I got into the NBC Writers on the Verge program, which was about four months long. Again, noting happened. I had to go back to doing design.
This year, I got into the CAAM Fellowship, where they assign mentors individually to each of the fellow. I was lucky enough to get the person I wanted, Kourtney Kang (How I Met Your Mother). She’s helping me with my pilot and it’s been great.

What is the hardest thing about being a television writing fellow?
There’s a lot of pressure since you feel like you’re so close. Both times I felt like it was my chance, but nothing happened. Of course, there are never any guarantees in the industry, even for people already staffed or repped. Their shows get canceled or they don’t get asked back. That’s just the nature of the business.
At some point, I had to seriously ask myself—Is that something I can live with forever? Is the uncertainty something I can accept? Because if not, I should just quit now and save myself the aggravation. Since I’m a masochist, I’m still going.

What is the easiest thing about being a television writing fellow?
There’s nothing easy. There are lots of really short deadlines, trying to impress the right people, trying to push yourself, or being good in the room. Luckily, all the other writers were supportive of each other. Everyone was extremely talented, and generous.

What is the biggest takeaway from your experience in the fellowships?
For Nickelodeon, it was how much the non-writing stuff matters. Presentation, pitching yourself, egos, the politics of things, and even how luck is involved.
For NBC, the biggest takeaway was that I need to speak up more in the room.

Can you talk about the CAAM mentorship process?
It’s been about a month since Kourtney and I started. When we met up, I pitched her two pilot ideas, and she liked one of them, so that’s the one I’m working on. I fleshed out the story, figured out the characters, and am ready to start outlining.
Having someone with so much experience give notes is incredible, especially in the early stages when you’re trying to figure out the conceptual stuff of how the show will work. I’m very grateful for this opportunity.

What is your day-to-day like?
I have my full-time day job. 40-50 hours a week, fairly regular. So then I have to write on nights and weekends, which is difficult. But I do remind myself that even on a show, I’d have to work on my own projects nights and weekends. Luckily, I also have my writing group, which meets every other week right now. That’s been a life-saver—receiving notes, pitching ideas, all the free therapy.

Who do you look up to in the television industry?
I love Greg Daniels. The Office, Parks & Recreation. He also did animation with King of the Hill and The Simpsons. That’s a pretty ridiculous resume.

What is the ideal job you would like to ultimately have?
Running my own show, which is probably what everybody wants. Or just writing for a good show with people you can get along with. Can’t really ask for more than that.

When people from outside the industry ask what you do, what do you tell them?
Currently, I probably don’t mention that I write, just the web design since that’s how I pay the bills.

What is your best professional advice to someone who wants to do what you do?
Well, I don’t feel qualified to give “professional” advice because I’m not a professional writer. I got into a couple fellowships, but I’m not staffed or even repped.
However, what I’m personally trying to do is to have solid writing samples, and meet people who will read my writing. Between writing and networking, I’d probably give more priority to the writing. A sub par writing sample read by the right people isn’t really going to help you.

What is your best personal advice to someone who wants to do what you do?
Give up now. [laughs] Why would you do this to yourself unless you had to? There are so many other, easier ways to make money. When I took the Nick Fellowship, it was huge pay-cut for me. Logically it made no sense. No sane person would do this. If there’s anything else you want to do, do that instead. If you’re cursed like me where you have to write, then prepare to be in it for the long haul.

What is your next step?
I’m finishing this pilot, and hopefully Kourtney will like it. Ideally, the pilot will lead to me getting representation, and then hopefully staffed.
After that, I’ve been wanting to try some sci-fi, either as a low-budget feature to direct, or as a pilot script. I also want to try to pitch an animated show at Nick, Disney and Cartoon Network. I met people while I was at the Nick Fellowship, and I went to art school for illustration, so I think animation would be something I’d be good at.

Any last words?
Don’t make excuses. Don’t blame your lack of success on others. Get feedback from others; it’s hard to be objective about your own work. Be prolific. Finish things.

Many thanks to the wickedly talented Kiyong Kim!

You can follow him on his personal blog of creative pursuits, where he chronicles his own television journey. He is also on Twitter.