The Scribosphere Carnival is a weekly discussion from a variety of screenwriting blogs around a rotating theme.

And I’m continuing to catch up on those I missed.

CRITICISM — This week’s Scribosphere topic is how we each take criticism, or how we don’t, who do we seek out to provide it, and what do we do with it once we have it, how we give it, or, you know…whatever.

In my long-standing experience as a professional critic (*takes a puff of cigarette*), there are a few things I always try to do when giving criticism (and more specifically, giving notes).

The Frame
How you say something is just as important as what you say.
This is especially true when giving notes, since, as you already know, writers are very sensitive creatures. An obvious tip is to never lead with the bad.
I’ll go a step further and mention the shit criticism sandwich. Heard of it? You’ve probably been on the other end of one, as it’s a psychological trick often used by HR and in performance reviews.
Basically, you start your criticism with a compliment, then move to a real issue, and conclude with another positive comment. Repeat ad nauseam.
Here’s a pretty comic strip to illustrate the idea: 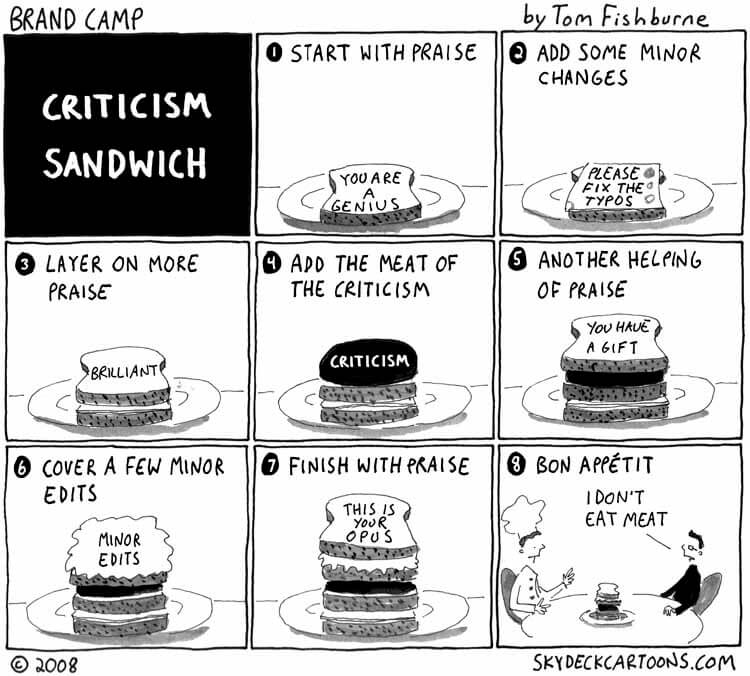 You’ll still be saying what you want to say, but in a nicer way.

The Content
What is the one thing you should always be doing when giving notes? Be doing honesty. That’s right.
If you’re trying to help someone with their script (or anything else for that matter), there’s nothing worse than downplaying and/or outright censoring a negative comment you may have. You need to put it all on the table and actually talk about the issues with the project, even if it’s going to mess up with, say, act two.
That doesn’t mean you should just point at the page and say it’s the worst thing ever. Or be like this: 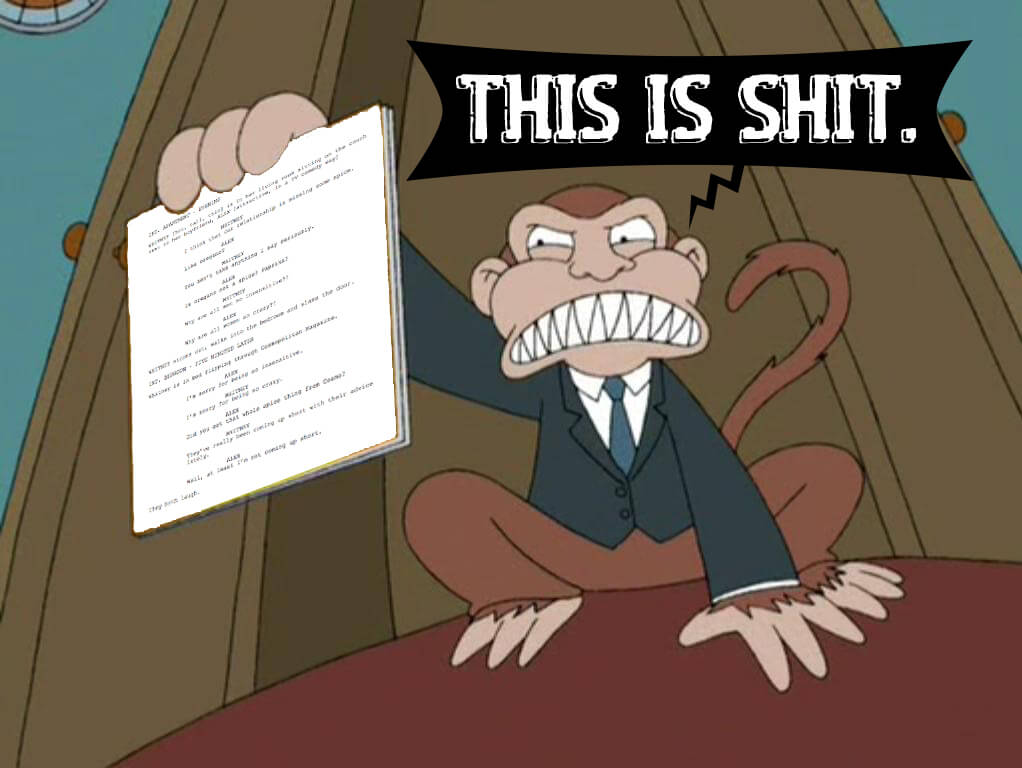 (He’s talking about the Photoshop job.)

Giving notes is about trust. Yes, I’m already tearing up.
If you’re willing to give notes, then you should be willing to put aside any personal feelings (good or bad), be objective, and be honest about it all.

In terms of what your notes should generally be about, a common rule of thumb is to start off with the macro first, and then move on to the micro.
In other words, start with the big picture. Structure, plot and characters are probably going to be the three biggest triggers.
As we’ve seen, don’t just pile on the negative. Unless it was literally the worst script of the decade, you probably (for example) engaged with some things, but not others. What about that turn in the fourth act? How amazing was it when the clown ended up being the serial joker?
Then, move on to the smaller things. It can be anything like syntax, phrasing, character names, formatting, etc.

Finally, if you’re sending out negative criticism, try to offer some sort of solution (or suggestion) to the problem(s) you’re highlighting.
Nobody likes a complainer.
It’s likely that they won’t actually be putting the ideas to use, but, like the shit criticism sandwich, it’s a way to soften the blow. (Plus it shows that you cared enough to think about the problem.)

To go on a slight tangent, if you’ll recall, I did a “script experiment” a few months back by publicly putting up my Star Trek: Terran spec pilot.
I was surprised at the amount of feedback and criticism I ended up getting (e-mail/Facebook/smoke signals). And I don’t mean one-line bashing; I’m talking full-on notes. From complete strangers.

It was an interesting experience (that is still ongoing), not only for the kind of criticism I received, but also from whom. Even more surprising to me was the 50/50 split between writers and non-industry people who were just Trek fans in their own rights. And all these people read my weird 1-hour pilot draft out of their own volition (no pets were kidnapped)! Still can’t believe it.
As I’ve previously said, a writer never wants to write in a vacuum. I’m always grateful when someone reads my work, let alone gives me notes in return.
Sometimes it is hard to get good feedback, or find people who can give honest feedback.

A good place to start is–wait for it–your friends.
Like many people (I assume), I tend to divide the people I get my notes from between writers/industry folks, and non-writers/non-industry people.
As you can probably guess, the idea is to end up with notes that will help both the craft and the story.
A layman doesn’t care about structure, but he’ll probably tell you that he fell into a deep coma around page 4 of your boring church description.
This is especially useful for genre/convoluted scripts, which I sometimes (often) tend to write. The stories can be intricate, so it’s nice to know where/when a reader gets confused or what s/he missed entirely.

Besides BFFs, another great way to get constructive (and continuous) feedback is through a writers group.
There’s a few ways of going about those. It can be a “build as you go” group, in which case people trade/reads X pages every week, and everyone comments about each other’s scripts. It can also be a writer’s room-type format, where each session revolves around a participant’s project.
Whichever way you go, it’s again about valuing the people’s opinions. If you don’t feel comfortable sharing your material and/or getting notes from the other members, you’ll be wasting more than just your time.

There could be an entire book written about the “proper” way to “take a note”. But this isn’t anger management.
The good news about criticism is that it isn’t always about bad news. Real criticism is supposed to measure and analyze both the positive and the negative behind a piece.
That is, in theory. The reality is that, as writers, we often only hear that bad news stuff.
We’re too sensitive.

The initial outpouring of energy when receiving negative criticism tends to go in two directions:

Anger
“The third act could use a little trimming.” Gimme a razor, and I’ll trim something alright.
“That character didn’t pop.” I’m gonna pop one right in your face!
“I wasn’t engaged with the story.” *sounds of head bashing*

Justification
“You don’t understand! There needs to be a floating pig in act three to symbolize the protagonist’s purgative withdrawal from the feeble-minded society surrounding him! Also, I love Pink Floyd.”

Neither reactions are worth your time (or your reader’s).
Criticism can be harsh, but regardless of our personal feelings, we need to realize that every comment, every criticism, and every note has its value. Even when it sounds lame.

Simply put, listen to the note behind the note.

Listen to the problem behind the criticism.
The person giving you feedback doesn’t always (read: never) know your script better than you. S/he therefore won’t always be giving the best solution or most relevant comment. But maybe it’s only a question of phrasing the problem properly.
If you’re getting notes from a non-writer, chances are that real structure issues will be disguised as issues regarding the reader’s comprehension/engagement (among other things).
If someone forgets to comment on an entire plotline (e.g. C story), maybe you don’t need it. Or if you do, then it’s definitely not as compelling as you think it is.
The same can be said about potential fixes/suggestion given to you. Listen to the problem behind the solution.
Even if you don’t agree with the fix (or find it appalling to even consider! My God, what the hell is this guy thinking?! That’ll bust my entire third act! I can’t even–), that doesn’t mean there isn’t a problem.
Abre los ojos.

Once all the notes have been received and tabulated, I try to organize them according to their importance, both on an “urgency” scale, and a “meta” scale (i.e. the aforementioned macro vs. micro problems). Note that the “importance scale” is in reference to the script, not the person giving the note. (Assuming of course I already know who’s giving it to me. Nomsayin’)
And then it’s time for draft number two. Or three. Or back to the outline. Or the ledge.

Well. That’s a lot about criticism.
Any notes?

Scribosphere blogs also on the topic:

Six years (and a movie?)