Posts tagged as “The Middleman”

Focus on Writing for Genre Television

On Friday evening was a round-table at Meltdown Comics featuring some of the greatest minds behind the best genre TV series currently on the air.
The panel was hosted by Sax Carr & Tim Powers and entitled ‘Writing for Genre Television.’
It was comprised of the following awesome people:
– Amy Berg
– Josh Friedman
– Bob Goodman
– Javier Grillo-Marxuach
– Deric A. Hughes
– Ashley Miller
– Benjamin Rabb
– Laura Valdivia Since there wasn’t much to do on a Friday afternoon, I decided to come to Meltdown Comics way earlier.
Turns out, that was pretty pointless, though I did buy a couple of comics and graphic novels.
Anyhow, once it was finally time to sit down into the Meltdown Gallery, it quickly became clear that we were going to wait some more as Josh Friedman hadn’t yet arrived.
Fortunately for everyone already present (and especially Javier’s appetite), a deliciously disgusting food truck was present on the scene of the crime.

And once everyone was ready, it was time to shine.
The panel was very fun and informative with a lot of awesome writing advice.
Probably (one of) the greatest and most memorable was undoubtedly Ashley Miller’s three rules every writer should abide to:
1) Write every day.
2) If you can’t write, read.
3) Finish things.

Javier had his own version of these same rules:
1) Write every day.
2) If you can’t write, read.
3) If you can’t read or write, then you’re illiterate.

A few writing debates were raised throughout the night.
The first was about the (non)inclusion of inside jokes into a genre show.
Josh Friedman apparently got mad one day after one of the writers snuck the name of a fan inside a script.
Why?
Constructing a believable genre world takes a lot of time and credibility, which can be instantly ruined by a mere ‘wink’ to the audience. This is tantamount to breaching the fourth wall.
It’s however a totally different thing if the in-jokes are part of the world itself and pop-culture talk is relevant to the characters (the example given was that of two characters talking about red shirts on Warehouse 13).

You are also doing something very wrong if you are stating the obvious in your dialogue.
If someone says either “Listen. Everybody knows that…” or “Now let me get this straight…”, rethink your entire scene. Josh also said the same about someone reading a case-file (therefore listing a person’s background to the audience).

Then came the delicate subject of killing off (regular) characters.
Sax Carr kind of wrongfully used Doyle’s death in Angel as an example of a gutsy move to kill a main cast member so early on in a series. Though that was quickly proven to be a bad choice as Doyle was in reality killed for practical (read: on-set) reasons, not creative ones. The point is that certain decisions made by writers are not always made solely for the sake of the story. They can also be done because of contractual or even personal obligations.
Another on-screen death discussed was Derek Reese being (randomly) killed by a Terminator (in The Sarah Connor Chronicles). In my mind, this still represents one of the greatest and balsiest deaths on a TV series.
If you’ll recall the episode in question, Brian Austin Green’s character was swiftly killed in action by a Terminator. No dramatic music, no smash cut to black, no heroic sacrifice. Just one minute he’s there, and the next he’s gone.
And we move on.
This is exactly why this death is so memorable. As explained by Josh himself, Derek was a soldier, and not all soldier die in the glory of battle. Derek knew he was going to die at some point and he accepted that.
If anything, his death made the world even more real.
Unsurprisingly, this gutsy decision had to be battled for by the writing staff (which even before that had a debate about it amongst themselves, raging for weeks).
The writers on the panel did tend to agree though that now act breaks and cliffhangers are not really about ‘life or death’ situations, rather about personal character stakes (see Breaking Bad).

This doesn’t bring me to the next topic, but I’ll talk about it anyways: anciliary online materials during the hiatus of a show, such as ARGs or webisodes. Is it becoming an obligation?
There again, the consensus seemed to be that it was a two-way street. The networks want it, and the writers love it. It’s just a question of finding the right balance between the two needs.
It is also difficult to make the ‘extra-curricular’ content canon. Case in point with The Lost Experience. Javier talked about his experience crafting, arguably, the best TV ARG made and how, even though the story explained the true meaning of Lost‘s numbers, fans just wouldn’t accept this as an answer.

The panel continued with a question about the zombie (sub)genre and if there is anything left to tell in it.
The bottom line of the discussion that followed was this: Regardless of the genre you want to work on, your story needs to be about something. You can’t say “my story is about vampires,” but maybe it’s more a coming-of-age story? (akin to Jessica in True Blood) It is also not because you’re introducing X or Y into the pot that you’re “elevating” the genre, that’s just ridiculous.
If the allegory works then go for it, but you shouldn’t start a project just to use a creature.

Last but not least, there was also some talk about…exposition.
I know, it’s a pain for us all.
Exposition can sometimes be delivered successfully by actors, but everyone agrees that it is best not to write an expository scene or dialogue. Rather, do both exposition and character at the same time. Every scene in your script should hold more than one piece of information.
On the same line of thought, Javier added that every scene and every story can potentially be brought back to the same basic rhythm of three (beginning, middle, end). He used as an example an early scene in Saving Private Ryan that used the same principle as a joke (set-up, development, pay-off) but wasn’t necessarily one to begin with.
If a scene isn’t working, maybe that’s one of the reasons.

So there you have it.
I’m sure there’s a lot I didn’t put down here, so once a video of the event is online, I’ll be sure to edit it in.
Until then, happy writing.

I am an asshole.

I am an asshole.

Just as Yom Kippur ends, I find out someone has posted the following comment regarding my “Fringe is unoriginal” post:

If you honestly think that your stupid post will steer people away from watching Fringe, YOU ARE SADLY MISTAKEN! Grow up, asshole!

Okay, my cover has been blown: I’m an immature asshole.

Indeed, I’m really bitter about being rejected from the Fringe writing staff so I decided to write a two-parter out of pure spite.
That’s basically the same reason why Jon Stewart decided to bash CNBC. The network had rejected him the year prior from being their new spokesperson.

I acknowledge that Sliders and the Kromaggs are pure inventions of mine that I retroactively created after seeing the Fringe Season Two premiere.
I went back in time impersonating both Tracy Tormé and David Peckinpah, and later went on to get that “parallel universe show” made, with all the while in the back of my mind this vague idea that, a decade later, I would post on some semi-obscure blog how this awkwardly-named series Fringe looks so much like a poor man’s Sliders.

So, yeah, I agree with you that I’m an asshole for showing the many ways something pretending to “revolutionize a genre” or be “original” actually is not.

Secondly, I also admit that I was angling for people to stop watching Fringe altogether after reading my post.
Not to be an egomaniac on top of being an asshole, but it’s pretty obvious everyone follows my advices.

If we take a look at what happened in the past year:
– The Middleman ended its second season with ground-breaking ratings;
– Stephen Colbert was named president both in the Marvel universe and our actual universe;
– The Jay Leno Show got taken off the air a week before it premiered;
– The MacGruber movie was never made;
– And, just recently, Flight of the Conchords and Breaking Bad won Emmys for being the best shows in their categories.

Though, for the record, I wasn’t asking anyone to stop watching Fringe. I was merely pointing out the awkward similitude the show has with another science-fiction series dating back to the mid-90s.

One Year of Crazy Stuff

One Year of Crazy Stuff

Today, we shall deal with the craziest, most pointless and/or shocking stuff from the past year.
And all that illustrated by magnificent videos.

If this was in a Colbert segment, it would probably be in: 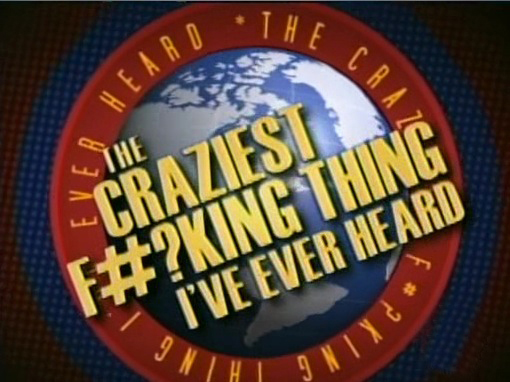 Incidentally, Stephen Colbert became the President in the Marvel universe.
I’m pretty sure he won thanks to this campaign video:

Going back to the various vids on here, the first one posted here was from the now-deceased show Middleman:

Let’s not forget another epic video, one of my favorite Psych moment from the episode American Duos:

Regarding movies, we’ve also seen some hilarious parodies, like this “Saturday Morning” cartoon version of Watchmen:

There was as well this “West Side Story meets the WGA strike” parody:


We uncovered the truth about the Disney movies (lazy people!):

Some other strange stuff was as well “uncovered”:

On the more serious side of things, there was one the scariest polls ever last November:

Almost 60% of the polled agreed that “the people who run the TV networks and the major movie studios do not share the religious and moral values of most Americans.”
48% think there is an “organized campaign by Hollywood and the national media to weaken the influence of religious values in this country.”
49% agree with the statement that “the U.S. is becoming too tolerant in its acceptance of different ideas and lifestyles.”
38% of the people who answered the poll agreed that books containing “dangerous ideas” should be banned from libraries.
The same number of people disagree that “censoring books is an old-fashioned idea.”

There was also a pretty hilarious quote from NBC’s Ben Silverman in this year’s Upfronts:

We are thrilled to be announcing such an awesome slate of new series that build on our existing quality brand and deliver emotional, human stories.

And finally, some musical component to all that, with this sublime John Williams acapella tribute:

Hopefully we’ll get more fun stuff in the coming months.
The playback continues tomorrow with the greatest posts.