“Why Star Trek?” – The State of an Enduring Franchise

One of the ideas behind Terran is to continue the ongoing discussion about the future of Star Trek.
Over the past few months, there has been a growing number of people clamoring for a new series. The sheer amount of articles on the subject is staggering. I can even link every word in this sentence to a different one. There is a need for it to come back to television.

It may seem self-evident to fans of the franchise that Star Trek should be brought back to TV, but I feel there are many more reasons for why (beyond being reactionary towards the reboot). There is a rationale to why having a new Trek series is important. Some of it even ties directly to why I wanted to make Terran in the first place. And it all boils down to one question: Why Star Trek?

The Need for Star Trek

It has been over eight years since the last original episode of a Star Trek series aired on television.
In that time, the TV landscape has evolved. A lot of dramas that have popped up, especially genre, aim for “dark and gritty” (I’ll get to that in a minute).

Yet, now more than ever, there is a dire need for Star Trek to come back to its true episodic roots. To come back as a series.
Terran is my vision for such a show, but beyond that, it is about what I think is currently missing on TV: science-fiction with a purpose.
One of the most interesting trait of the genre has always been that it could serve as an echo of reality. And the world desperately needs a reflection of itself.
You could make a pretty long list of contemporary issues that are begging to be explored (surveillance, social class, role of government, etc.). These are issues that would still be prevalent within the Trek-verse. In fact, the franchise has always been great at taking on societal and moral issues throughout its series (some more contemporary than others).

Even more importantly, Star Trek endures because it always has been forward-looking.
Star Trek stands for hope. Reaching for the sky and going where no one has gone before. It is sending a positive outlook about people. A better humanity, united, and equal. We need Star Trek on TV to inspire society, but also a new generation, people growing up to be explorers in their fields. This is about believing in a better future and striving to better ourselves.

We need a new Star Trek series, not for the fans of the franchise, but for everybody else. We need it for the bigger picture.

A popular trend nowadays is to do fiction that is “dark and gritty“.
Since those somber works are often concerned with keeping a realistic approach, the tone has wrongfully become synonymous with “realism”.
The truth is that this spectrum is closer to being a grid. Like this one: 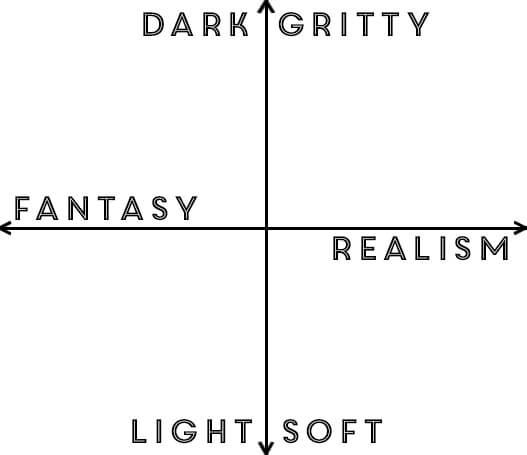 Battlestar Galactica is a “realistic” science-fiction show that is also dark. But it starts off with a genocide.
Would gritty really suit a Star Trek series? I don’t think so. Star Trek is set in an idealistic future. Simply put, it isn’t in its DNA (at least from the outset).
Star Trek Renegades, as I previously put it, is an ‘awkwardly bleak’ web-series. It tries to stick the “dark & gritty” trend on the franchise, without it making much sense. The concept of Tuvok and Chekov going rogue seems out of place, especially given how honorable the characters were in their respective series.
Even Deep Space 9 was not actually that bleak. It was merely realistic about the world around it. It wasn’t meant to devalue the values and ideals of the series, it was meant to bring nuances to a previously “black and white” universe.

io9 recently put out an editorial asking that the new Trek movies do not “pull a DS9”, making it synonymous with having meaningless bleakness. Incorrectly so. DS9 is about bringing a sense of realism to the franchise.
In the Pale Moonlight is perhaps DS9’s, and Star Trek‘s darkest hour, but it is that way in spite of the world it is set in. Sisko didn’t reach “that point” for the sake of it (or because moral dilemmas are cool). We reached this dark moment out of necessity. (I won’t spoil what I’m exactly talking about for people who haven’t seen the episode yet.) In fact, DS9 is labeled as a much darker show than its counterpart, but I partly disagree with that assessment. The Next Generation, Voyager and Enterprise all had their dark moments. The difference is that DS9 dealt with serious issues that sometimes led to morally ambiguous decisions that stayed with the show. Picard turning into a Borg, causing the deaths of countless people, had almost no real consequences in the long run of TNG. And let’s not even get started on Janeway (or Tuvix).
What made DS9 such a stark contrast in the Trek universe were the consequences for actions previously undertaken. There wasn’t a reset button. It was life (and death). A decade before BSG and Lost, and over fifteen years before Game of Thrones or Breaking Bad.

All of this is to say that Star Trek has been grim, but dark & gritty isn’t the default. The characters are not amoral, and neither is the world.
Star Trek: Terran fits with the DS9 sensibility of realism, without trying to be “dark and gritty”. Hope and realism are not mutually exclusive.
The Original Series had a certain sense of naiveté about blissful hope that the latter series tried to shed (or at least address). Different sensibilities, different times.
One of the ideas behind Terran is to be realistic, but not depressing. Nobody is singing Kumbaya on Earth. The Federation, the United Earth and Starfleet are not perfect. And just because humanity has outgrown doesn’t mean that a post-scarcity world isn’t without issues (if only from outside). Yet Star Trek is still a hopeful future. It is people working to attain ideals greater than themselves.

The current state of the franchise is simple: the Powers That Be have no plans to produce a new Star Trek series in the near future.
There are multiple issues at play, not the least of which is rights issues. Currently, CBS owns the production rights to any new Star Trek series, while Paramount Pictures owns the Star Trek films. Memory Alpha actually has a pretty decent history of corporate ownership.

With all that in mind, I decided to put my time where my mind was, and spec my own take of a new Trek series. Terran. Not because it could be produced, but because it needed to be proven. This is, after all, still a proof of concept.
The idea was to advance the conversation on why and how Star Trek can be brought back to TV. There are ways of creating a fresh, original, new take on this universe, while meeting current TV industry standards.
In the age of serialized storytelling, it seems unthinkable for a potential science-fiction series to revert to decade-old formulas of stand-alone adventures in space. This mold won’t work. I want Terran to be a return to the proper roots of the franchise (less mindless explosions, more story), with modern storytelling (I’ve already dissected the concept of the show in more details). All while still being accessible to people who may not know much about the franchise.

So, what exactly is in the future of Star Trek? I’ve just offered you my vision with Terran. Maybe you can tell me yours.
Together, we can rally around bringing the franchise back to television. We can share our views on why a show is needed, and discuss what exactly it can be.
The Star Trek franchise will endure as long as you want it to. Let it live on!