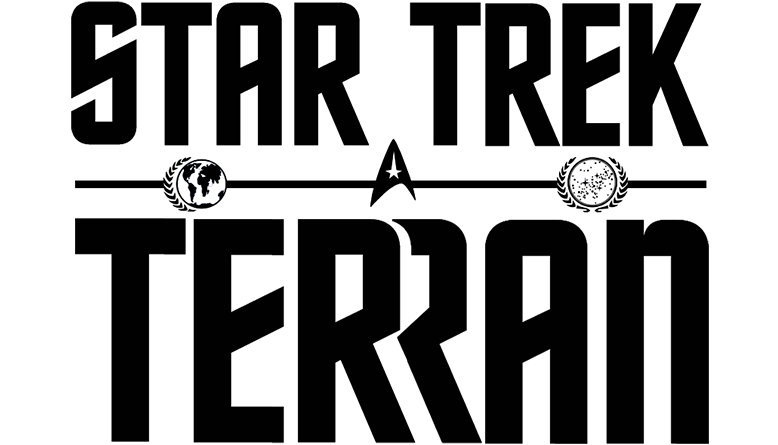 After a lot of teasing, the mystery script project is finally revealed. Enjoy!

Just to get that out of the way: this is not a Kickstarter, crowd-funding or other monetary “fan project”.

What is Star Trek: Terran all about?
There is, currently, an ever-growing discussion about Star Trek, and especially the future of the franchise.
As a fan, I thought it was finally time to advance that discussion.
Specifically, I wanted to bring to the table a realistic way Star Trek could be brought back to TV. Not a fan-fiction, and not a web-series (or combinations thereof).
I ended up writing a 1-hour original spec pilot off that idea, which I am now posting online. No strings attached.

Terran is what, I believe, a new Star Trek show HAS to be: a fresh take on the franchise.
This is not a generic “re-imagining” or general reboot/remake/sequel.
It is my version of a viable modern Star Trek series, trying to work within the realities of the mythology and television industry.

The show is also supposed (and meant) to be accessible to everyone, including non-Trekkies.
If you’re at least sci-fi curious, you’re more than welcomed to partake in the script reading. The more the merrier!

I don’t consider Terran to be a pitch, nor do I expect it to be actually made by anyone any time soon.
It’s an experiment. A proof of concept.

Over the next couple of days, I’ll delve even more into the project through two additional posts.
One about the state of the Star Trek franchise, and the other about the writing/spec side of this particular script (and why I chose to post it).

In the meantime, let me finally introduce to you the project.

Set in the mid-23rd century, Star Trek: Terran follows the most powerful people in the three most influential branches on Earth:
– The Federation, with the President and his close advisers.
– The United Earth government, via the Prime Minister.
– Starfleet, mainly through the Academy and Intelligence, in various echelons.

Terran is a show that aims to be real. It isn’t about the showy tech. It isn’t about the technobabble. It is about a reflection of reality.
Grand ideals and a hopeful outlook, like Star Trek always has been, but with stories closer to The West Wing or Game of Thrones than Stargate SG-1.

The series is grounded figuratively, but not literally. The title doesn’t reflect a location, it represents humanity’s attributes.
At its core, Terran is a story about the exploration of who we are as people. It is about a collection of characters, intertwined in 23rd-century realpolitik and futuristic institutions. Different goals and different values, but all striving towards a prosperous future.

It’s always better to discover a character through their portrayal on the page, rather than a simplistic description (especially just off a pilot).
But here’s still a small introduction of each.

The main ensemble cast includes a wide range of people:
– President David Kendrick: Commander in chief of the United Federations of Planet. A bold leader that wants to see the best in others.
– Prime Minister Zora Guillory: Executive leader of the United Earth government. She wants to protect her people (and planet) as best she can.
– Val: Chief of staff for President Kendrick. A Vulcan focused on being extremely proficient at helping the President.
– Admiral Barros: The boss of Starfleet Intelligence. Under pressure.
– The Deltan: Lieutenant at Starfleet Academy, in charge of Cadet Squadron 47. She also dabbles in extra-curricular activities.
– Thelos: A one-antennad Andorian who enjoys telling stories and wearing all-black clothing.
– Damien Ellis: Cadet at Starfleet Academy. He likes to think he’s always right (and is).
– Kylli Moon: Reporter for the Federation News Network and married to Prime Minister Guillory.
– Doctor Richard Daystrom: Works at Starfleet Advanced Technologies. He’s also an old friend of the President (and the only preexisting character on this list).

Since some people reading the Terran pilot won’t be familiar with a few Trek-related visuals (specifically alien races mentioned), I took the liberty of digging up pictures and concept art to better illustrate the Star Trek world. A couple are from the shows, the others are concepts for the two latest Star Trek movies.

Time to answer a few (soon-to-be) common questions about Terran.

Is this yet another “dark and gritty” attempt at a beloved franchise?
Short answer: no. There’s a difference between being realistic, and being dark & gritty.
I’ll go in depth about this very point in tomorrow’s post, but suffice it to say that Terran is not trying to be Battlestar Galactica: Starfleet Edition (or the awkwardly bleak Star Trek Renegades).

Is this set in the Bad Robot/NuTrek-verse?
The Terran pilot works in both the prime or new timeline.
Though if there’s a new Star Trek series made in the coming decade, it will probably be set in the NuTrek-verse.
Yes, I’m saying that in full knowledge of the different TV/movie copyright holders (CBS v. Paramount).

Isn’t the franchise called STAR Trek for a reason? And by reason I mean STARS.
I personally believe the Star Trek franchise is about one thing: exploration.
Whether that literally means exploring the stars, or more metaphorically an exploration of humanity, that’s up to the shows (and, to various degrees, the movies).
After 700+ episodes, I do think that taking the literal concept of a trek throughout the stars is a bit tiring, especially for a “new take”.
Sure, you could do a show in the 25th century. The ships would be sleeker, maybe there’d be a Romulan on board or something. It would basically be “the NEXT next generation”. But it wouldn’t feel new, and would be compared ad nauseam to its 90s counterpart.
One of the reasons the television franchise started to burn out (even before Enterprise) was because of a lack of drive, and novelty factor. There are only so many “reactor failure” stories.
Terran, to me, still fits the above description. It’s ultimately closer to what Deep Space 9 brought to the table: real and (hopefully) interesting situations with a backdrop of human introspection. It’s self-exploration (or self-reflection).

It is well known that Gene Roddenberry’s uncompromising stance on a utopian version of Earth was a point of dissension and controversy among some of the shows’ writers.
The planet was barely a focal point of The Original Series. The question was more about how “evolved” humanity had become in the future.
By the time the utopian concept was being explored in the latter shows, that vision had already been challenged in the canon. In other words, it was never really explored as faithfully being the utopia. Of course, this very comment is itself a point of dissension among Star Trek fans.

TOS didn’t have to legitimately deal head-on with this vision, so there was no reason to even question it.
DS9, and Enterprise to a different extent, both wanted to explore the cost of this utopia.
And if you think The Next Generation is exempt from this contemplation, take a look at the featured Starfleet admirals on the show. There’s a reason why all of them turn out to be “bad guys”.
It’s the characters that are always striving to keep these ideals.

Maybe there’s a reason why the Earth hasn’t been a focus of Star Trek stories. Midi-chlorians, anyone?
I’d say that the equivalent to the Star Wars “Force” would actually be all the technology used in Trek. Therefore, midi-chlorians = treknobabble.
More importantly, Earth has been used at some point in every Star Trek series. It’s even my opinion that the some of the best and most compelling episodes of the entire franchise are set on Earth (or directly connected to it). Examples include:
The Next Generation: Family/The First Duty (4×02 / 5×19)
Deep Space 9: Homefront/Paradise Lost (4×11 / 4×12)
Voyager: In the Flesh/Pathfinder (5×04 / 6×10)
Enterprise: Demons/Terra Prime (4×20 / 4×21)
This is just the tip of the iceberg.

Terran is is about giving a new perspective on something that has been in the background of Star Trek for nearly half a century.
It is delving, head first, into this part of the universe, (ironically) seldom explored, but fundamental to the entire dynamic of the franchise.

Click Here For Part II – “Why Star Trek?”: The State of an Enduring Franchise

“Why Star Trek?” – The State of an Enduring Franchise