Time to tell you guys about my fabulous time at Cannes only a week ago during the 62nd Film Festival.
Glamour, parties, celebrities, beaches, yachts, red carpets, premieres, photocalls, and, uhm, movies?
That doesn’t really sum up completely the whole shebang.
A day-by-day account of what happened “over there” is more appropriate, don’t you agree?
Lots of pictures ahead as well, so if your bandwidth/ISP can’t handle the epicness, I apologize for your failure.

Episode I: The Sleep Deprivation Menace
The following takes place between Thursday, May 14, and Sunday, May 17 2009.

Thursday 14:
The least interesting day to be honest.
You already saw my last blog post before my departure.
After that, it was time to take the TGV (I had barely packed my suitcase in time). 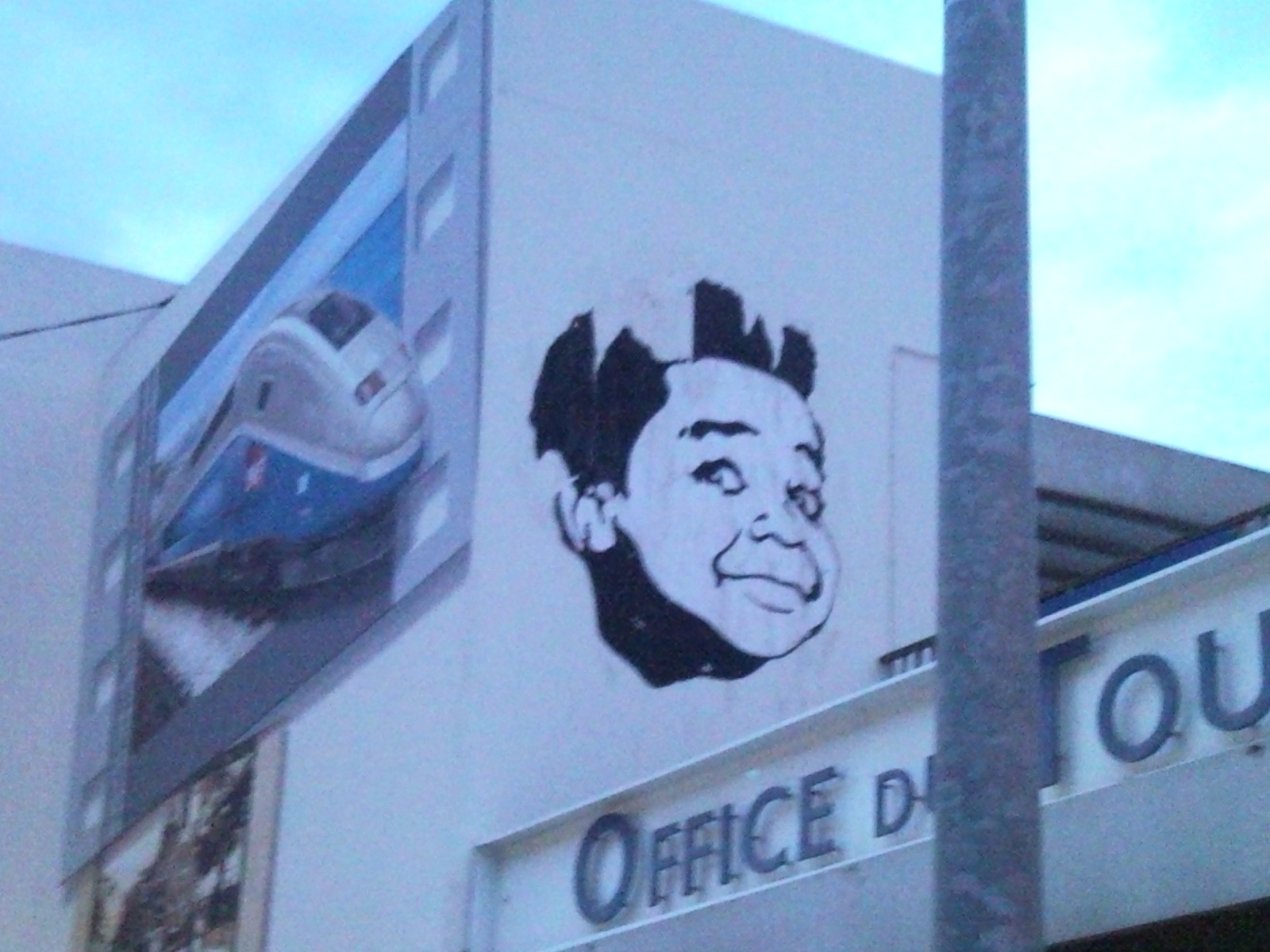 I arrive in Cannes too late to get my badge (around 9PM) so I go home and prepare for the next day.
Yeah I know, riveting story.

Friday 15:
Early wake-up call (6AM).
There’s gonna be a lot of those during the 10 days.
I go pick-up a friend at the train station and use that precious time to get my epic pass and Cannes bag containing everything relevant like the all-important official screenings guide and so on. 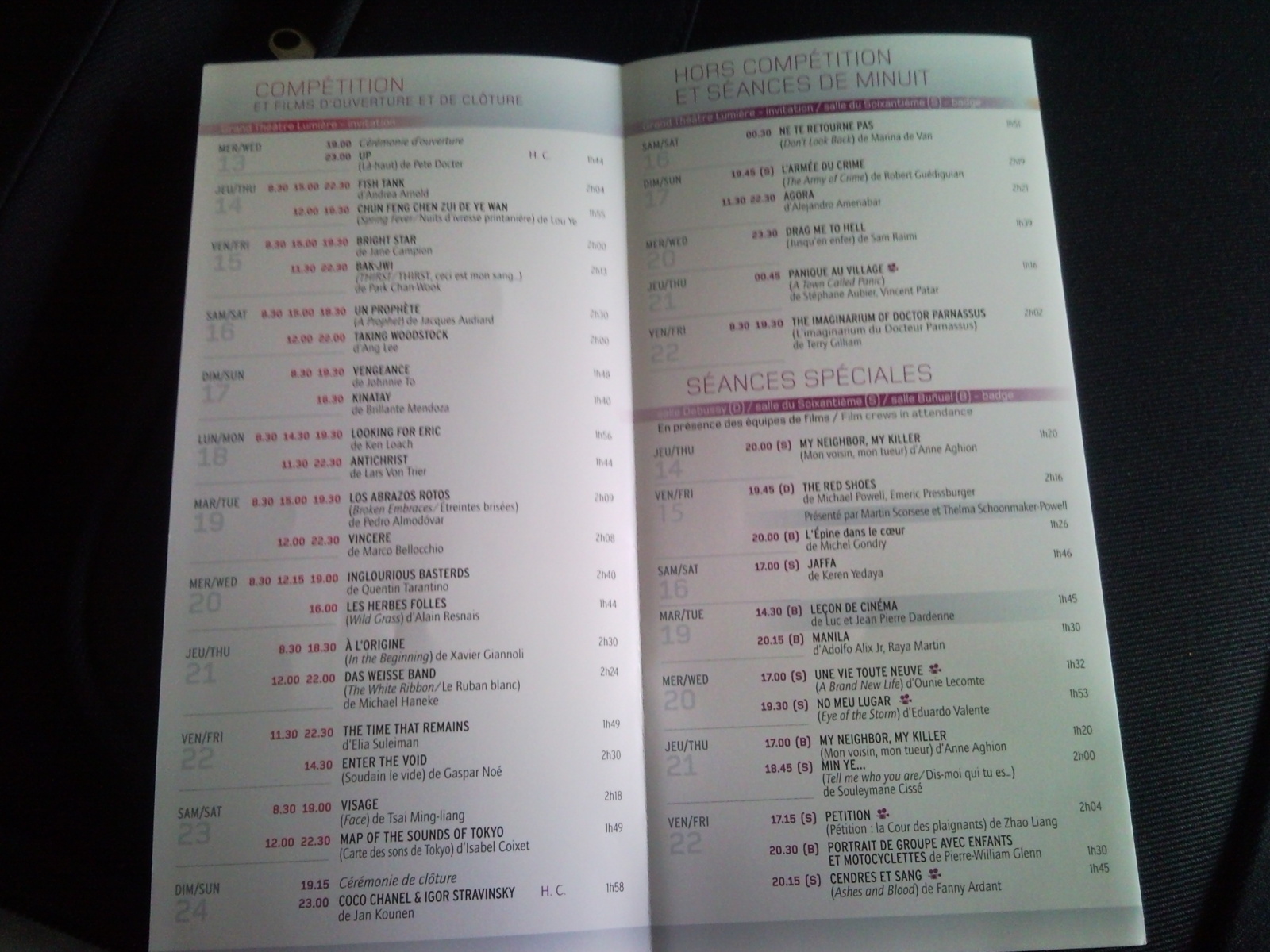 Bonus point, a free Contrex Natural Mineral Water is included.
Not that I’m on a diet or anything. 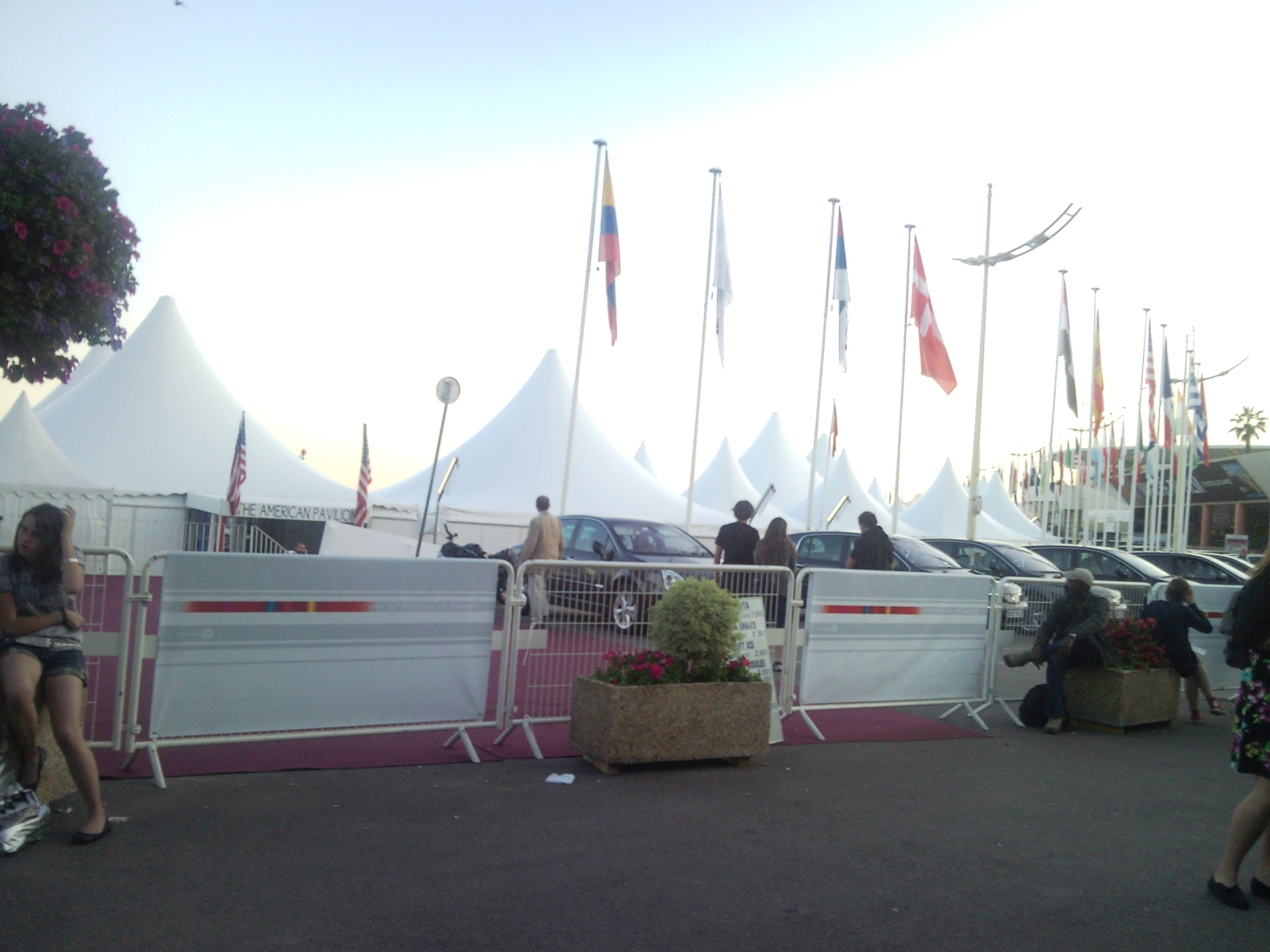 I then head to the American Pavilion to get my own badge to go that afternoon to the one-on-one with Francis Ford Coppolla. 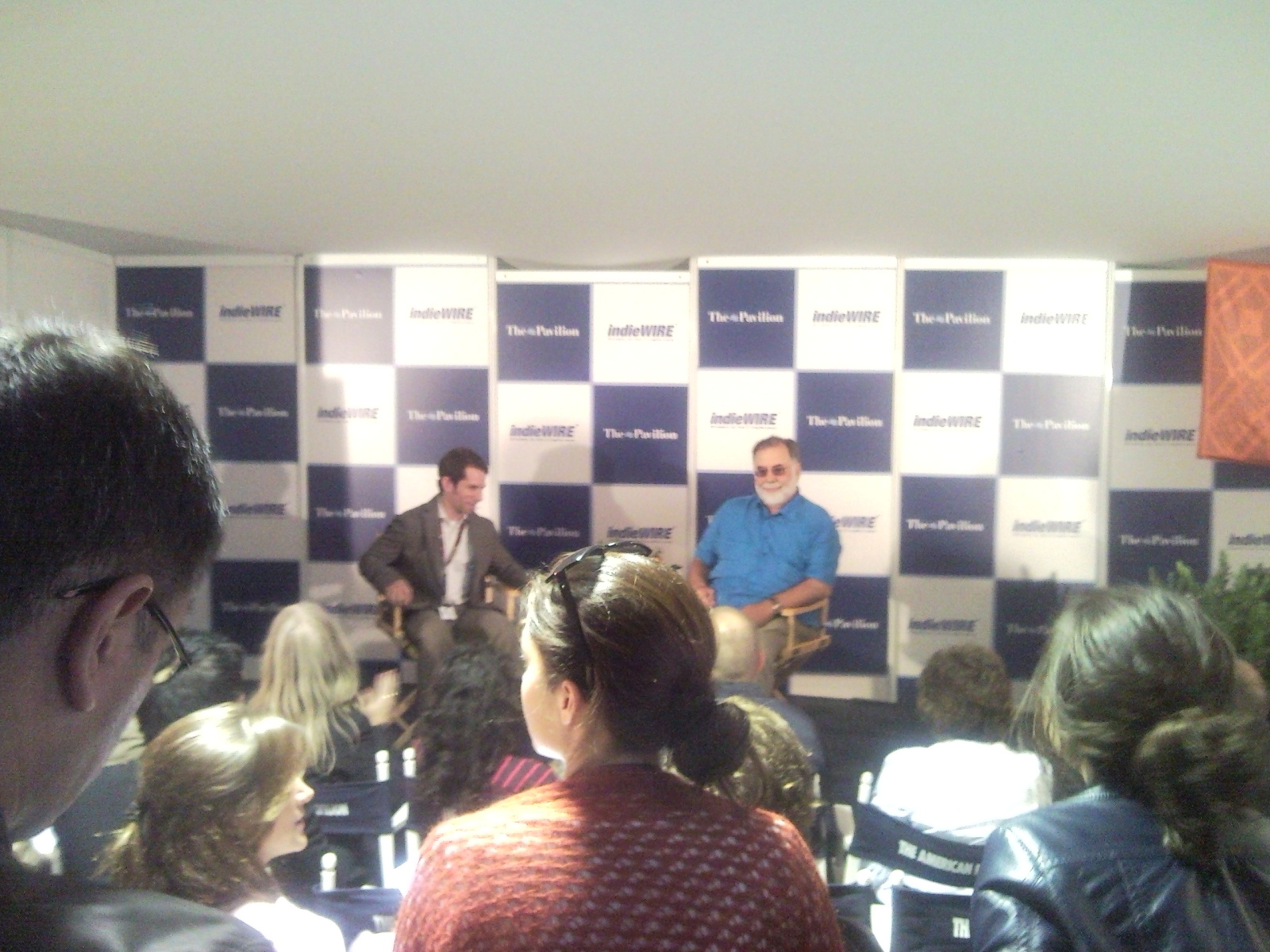 Very interesting stuff is being said there, unfortunately I don’t have my notepad with me so can’t note down what the man is saying. If I find a review of the event though, I’ll post it here.
Moving on to a few hours afterwards, I narrowly miss Michel Gondry’s new movie, l’Epine dans le Coeur.
Around 8PM, I stand in line in the pouring rain to go see Park Chan-Wook’s Bak-Jwi, hopeful that I’ll be handed a last-minute ticket. 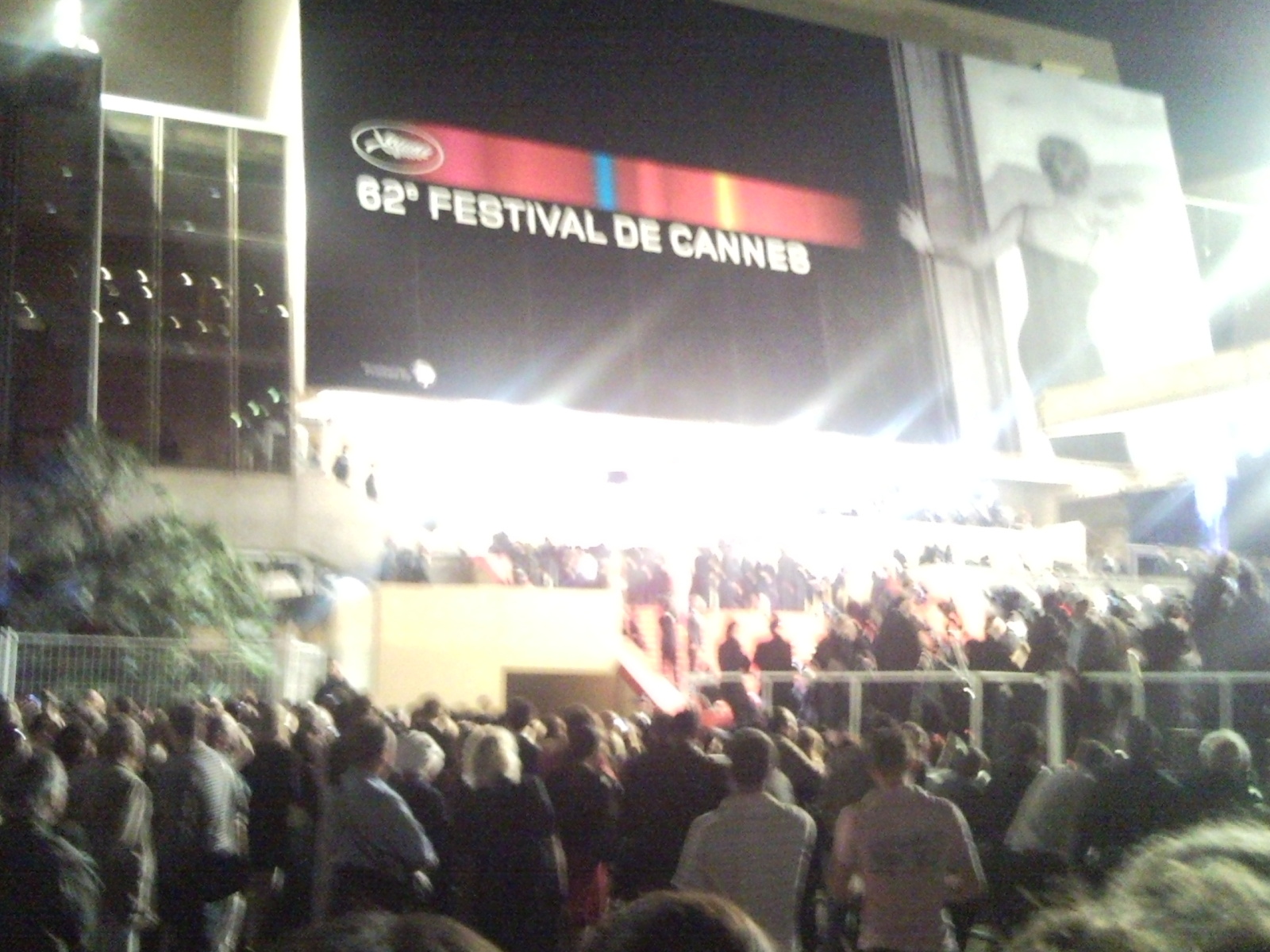 And I am!
I run inside the theatre despite the rain.
My first movie in Cannes, and it’s great! Of course, not even close to Oldboy, but still a good movie (and one of the best this year).
As for the actual cinema experience, pretty fun how it goes (at least regarding the Grand Palais/Théâtre Lumière).
Basically in the cinema there’s projected onto the screen the live red carpet feed and you follow who enters. Once the crew arrives, no one else is allowed inside the theatre. Meanwhile, you still follow live their entrance as they arrive inside the theatre you’re in and a standing ovation occurs just before the movie.
Then the following happens, and the movie begins. 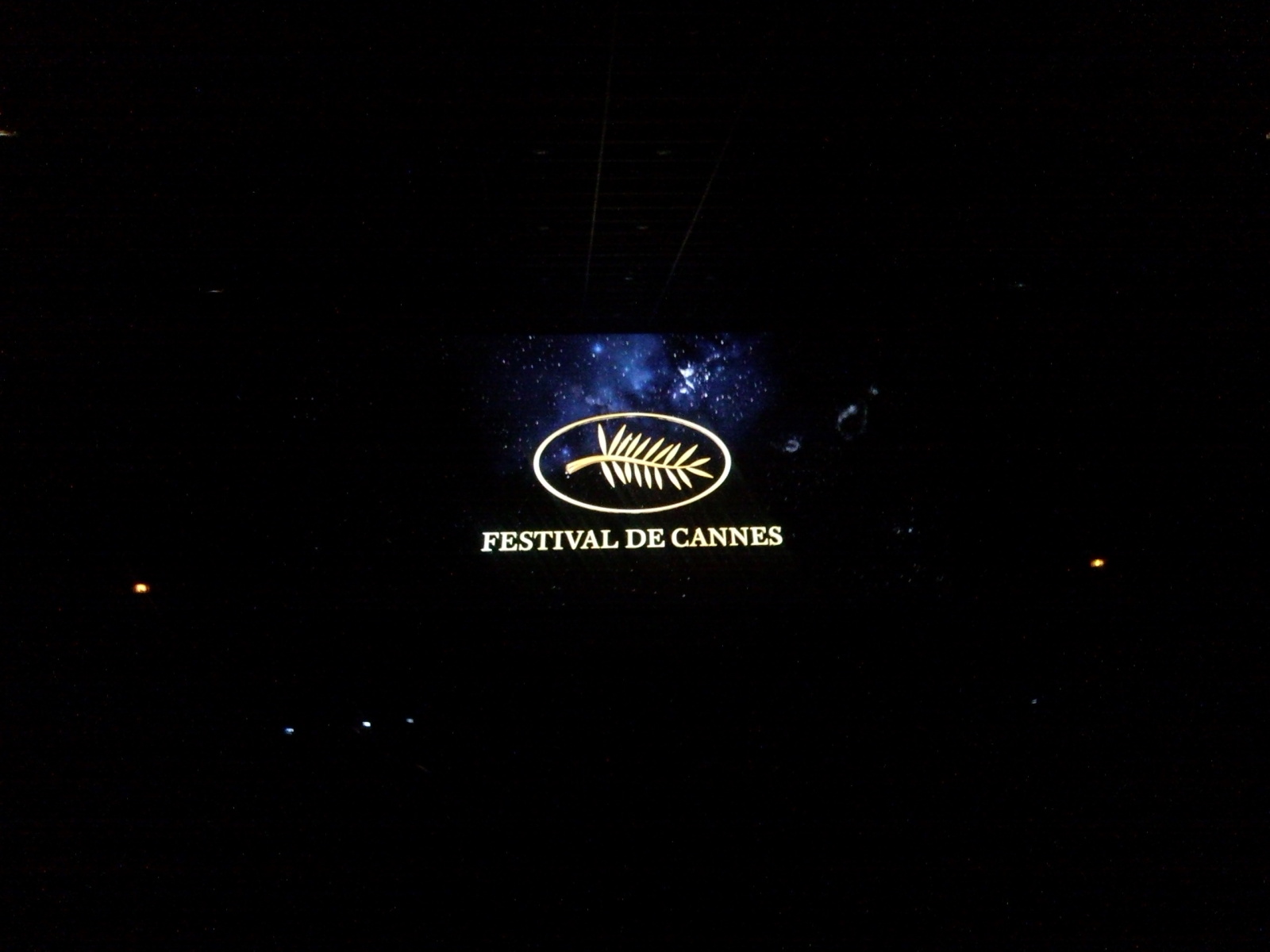 Once the movie ends, all bets are off as to what the public’s reaction will be.
Fortunately for Chan-Wook this time around, everyone is won over by this beautiful vampire tale.
And no, Twilight isn’t involved.
By the time I get back to the apartment, it’s past 3AM. Time to get some sleep.

Saturday 16:
Not much is happening during the day as I’m mostly sleeping (no one woke me up!).
Because of this, I miss what will become one of the most talked-about movie for the coveted Palme d’Or: Jacques Audiard’s A Prophet.
I also miss Ang Lee’s Taking Woodstock.
What I do not miss however, is the first of a series of private villa party. 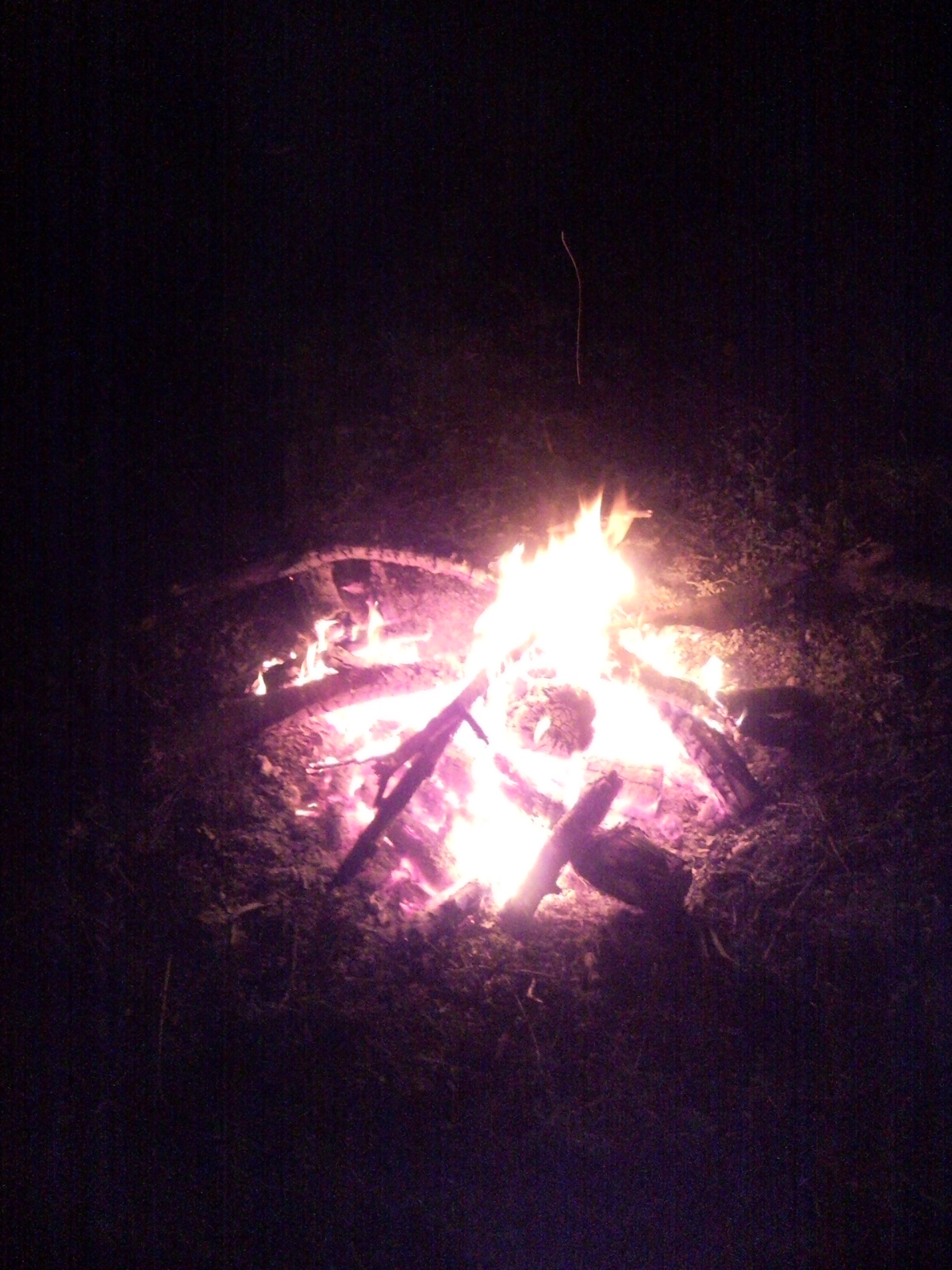 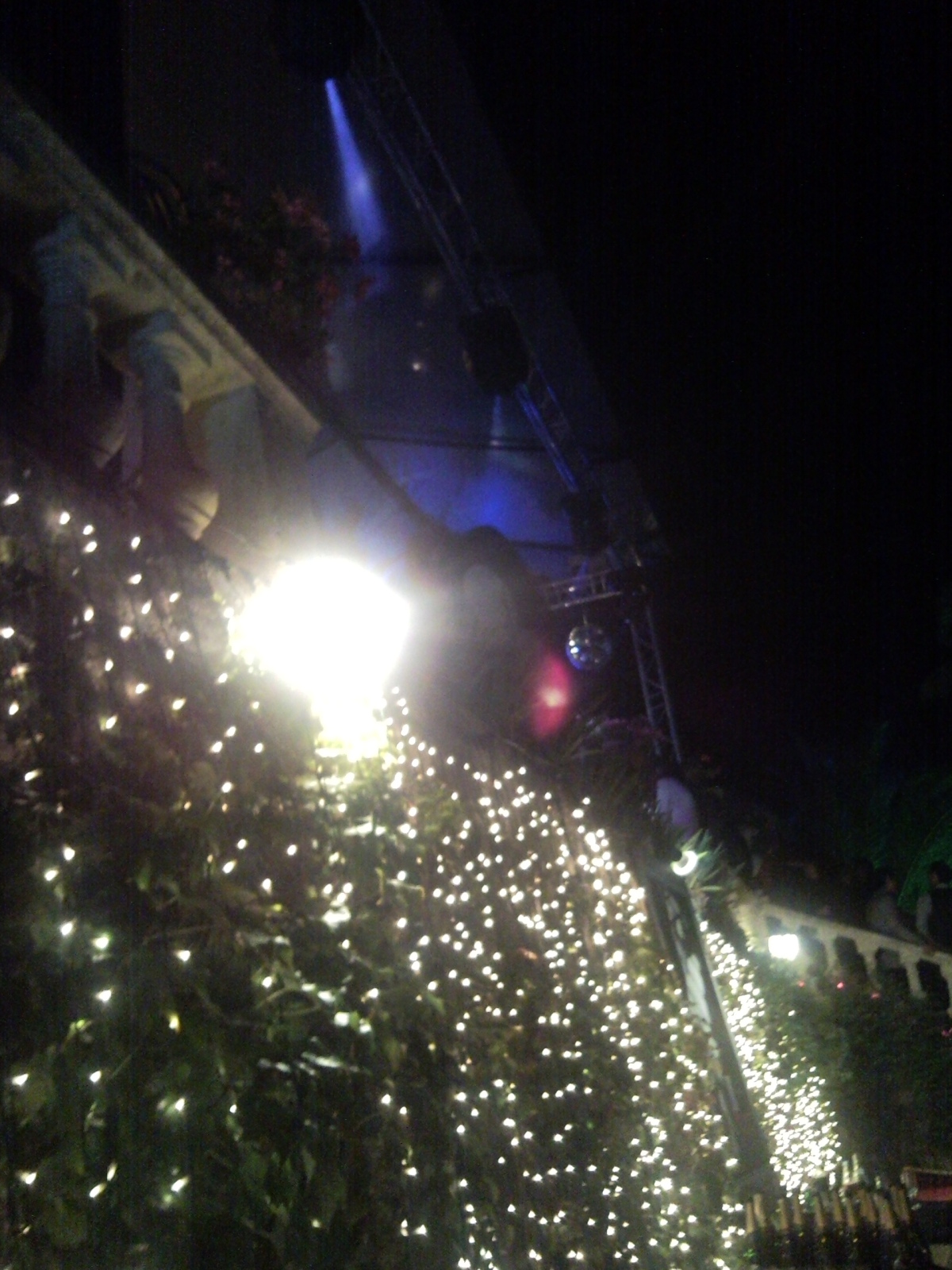 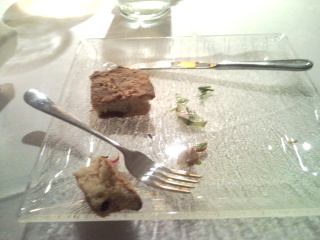 Yup, we successfully get inside the private Audiard party situated in a beautiful villa (with bonfires!) where loads of French TV personalities are present, as well as a completely drunk Edouard Baer (this year’s Cannes ceremony host), french-kissing everything that goes. 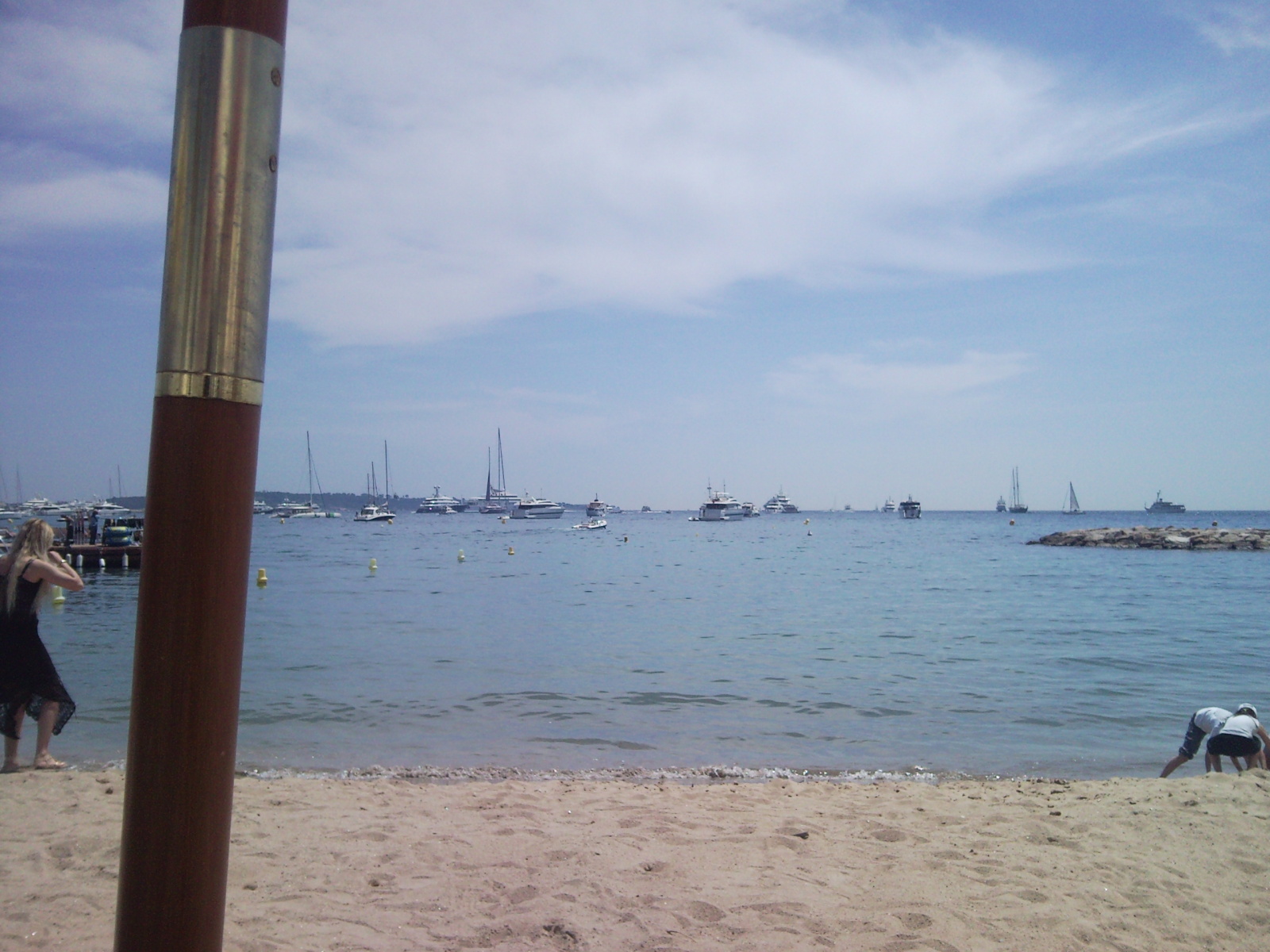 I also cannot resist the free buffet.
We were on the list for the Taking Woodstock party but ultimately didn’t go as the echos we had of the party weren’t good ones.
The night is so young that the Audiard fiesta finishes around 4AM. 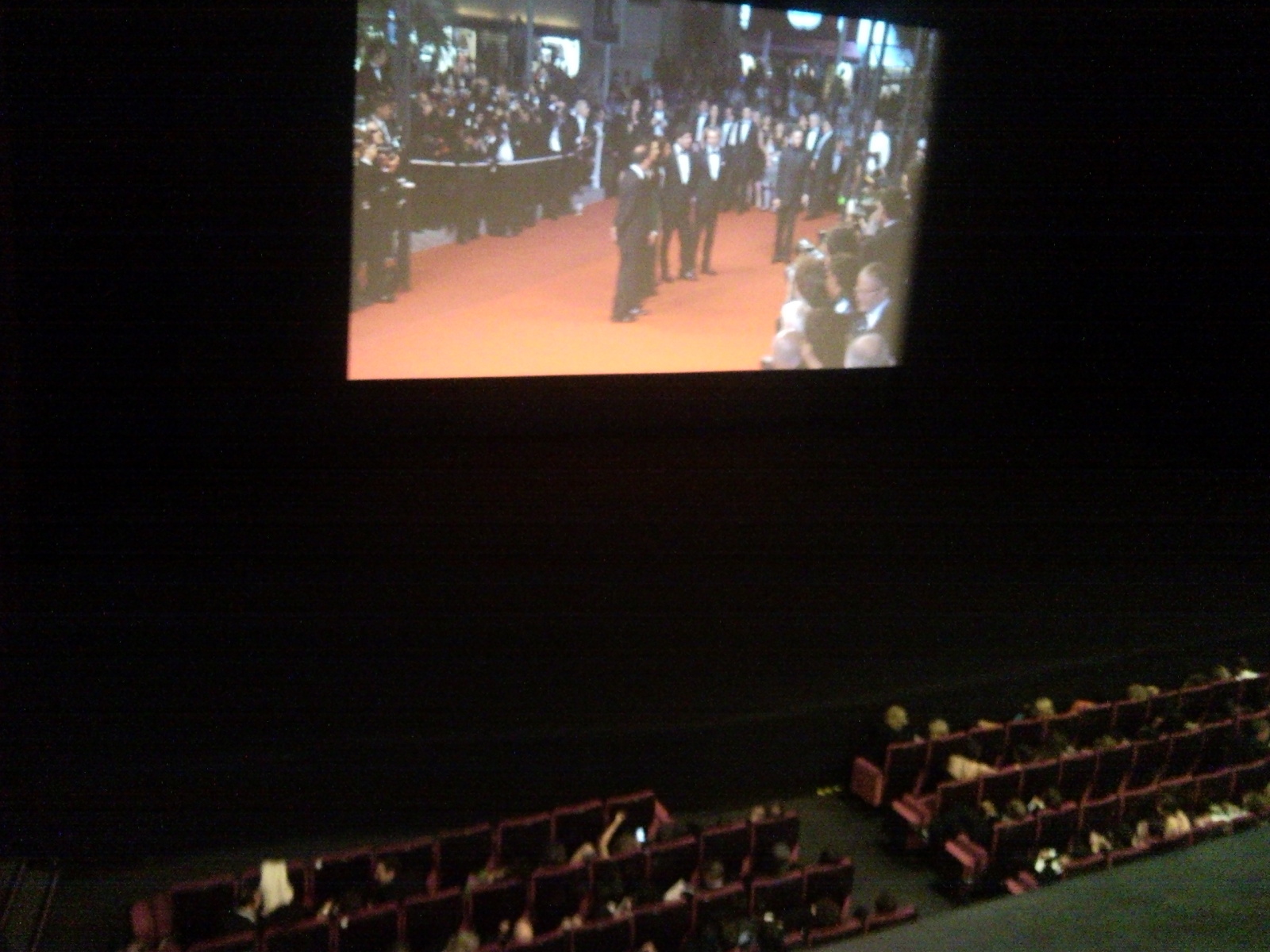 I then try to go see Taking Woodstock, but the passage is blocked because Agora‘s crew is about to come out of the photo-call, meaning I’m gonna see Alejandro Amenábar and Rachel Weisz as they pass inches from me.
I again miss Taking Woodstock unfortunately.
Later that afternoon, I get to see Johnnie To’s Vengeance, starring non other than Johnny Haliday.
I know it’s not really supposed to be a comedy, but man was that movie hilarious.
After this funny little bit, I get tickets for Agora at the Grand Palais (out of competition).
One of the movies I really want to see and I get tickets, yeah! 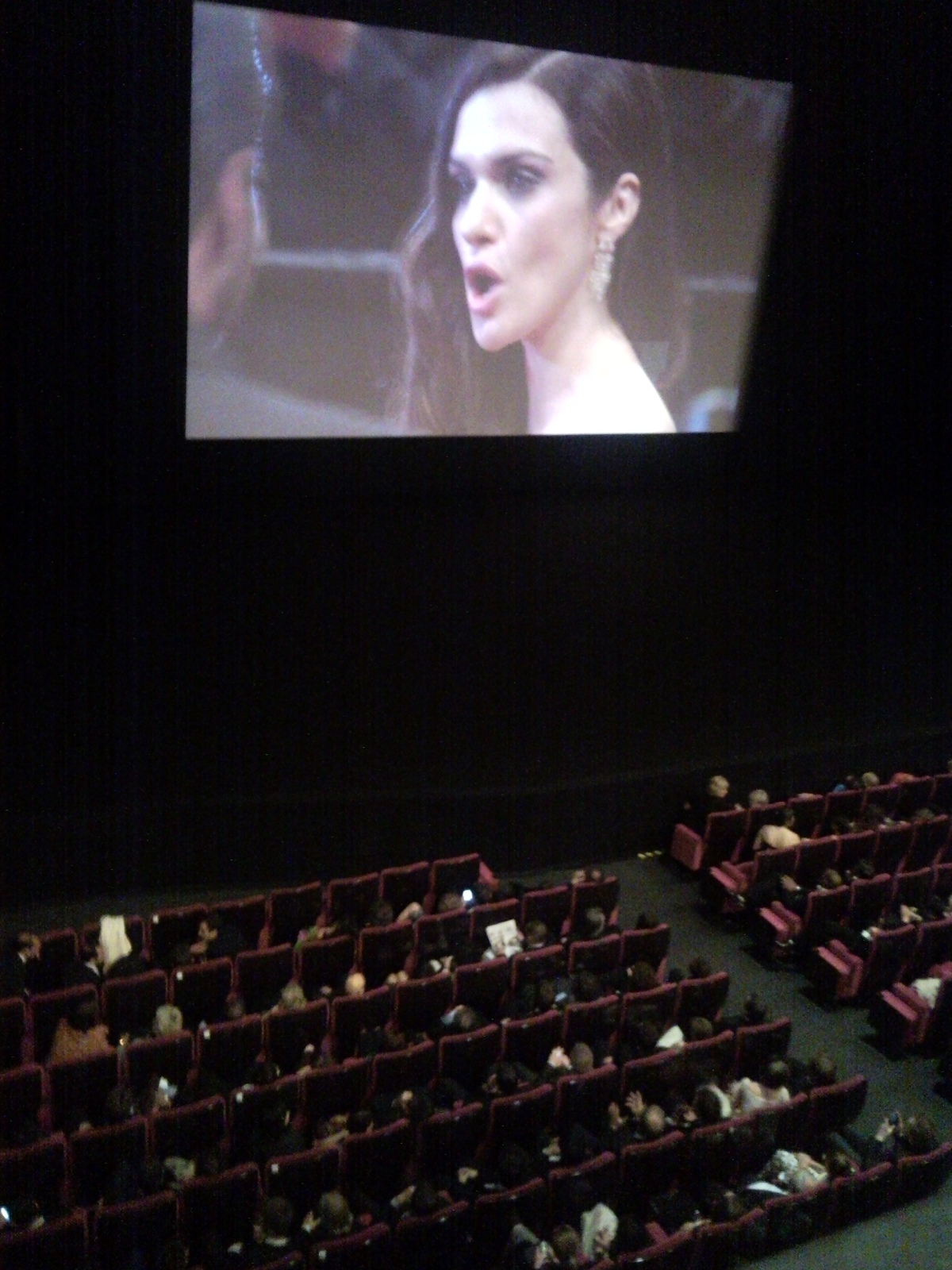 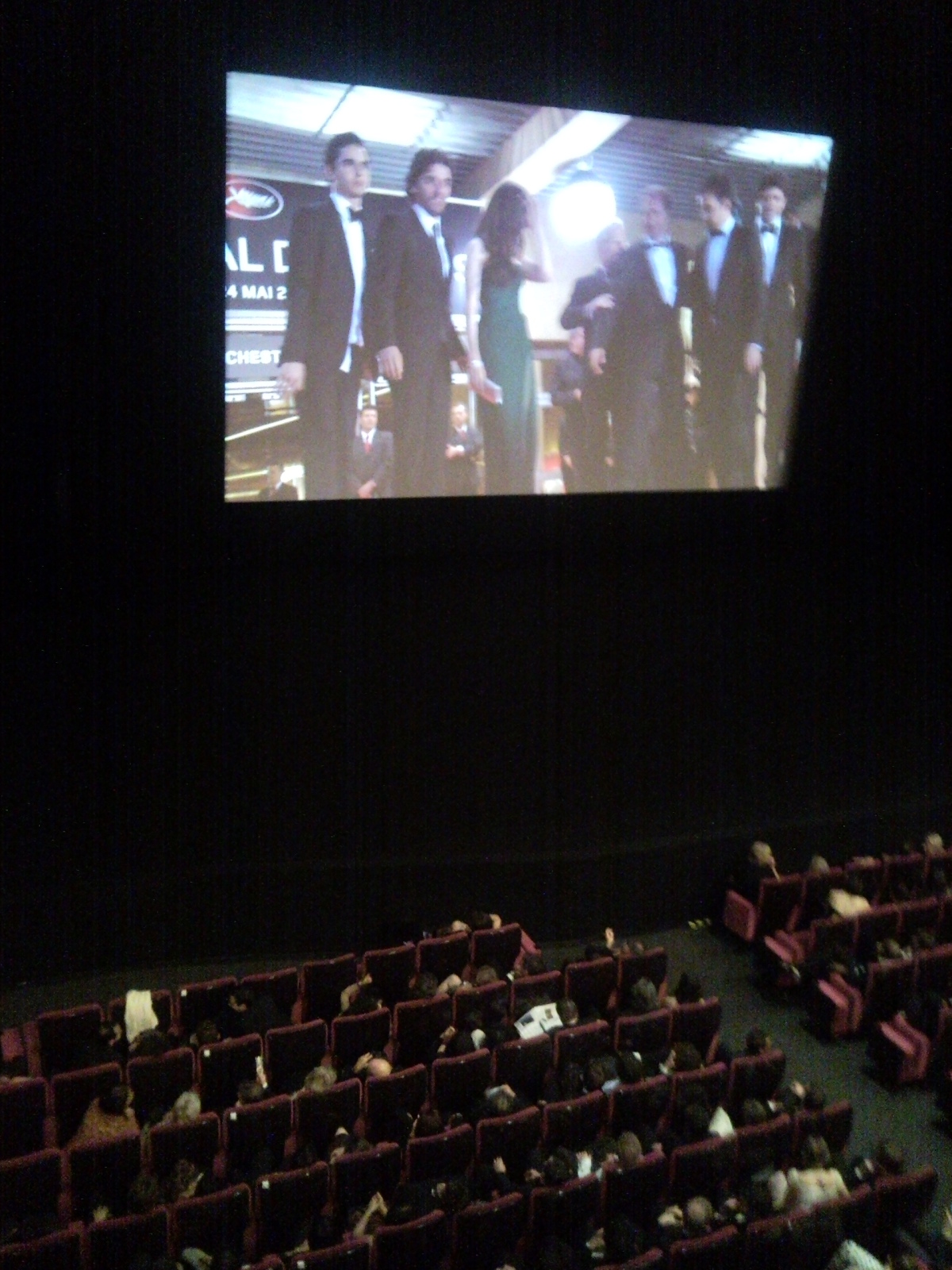 I’ve heard lots of negative remarks about the movie. Personally, I loved it. It might be very long for some, but I didn’t look at my watch unlike certain people.
The movie is first set in 390 A.D. in Alexandria (there are really two halves to this story, set several years apart). Even though the story is apparently focused on Weisz’s character, Hypatia (an atheist), the core of the movie comes from the clashes between the religions, and the bloody rise of Christianity. There is also some science in this, given that Hypathia is trying to understand how/why the world turns (more or less literally).
If you find the story boring, at least you’ll be able to appreciate the magnificent decors and the jaw-dropping reconstruction of Alexandria. 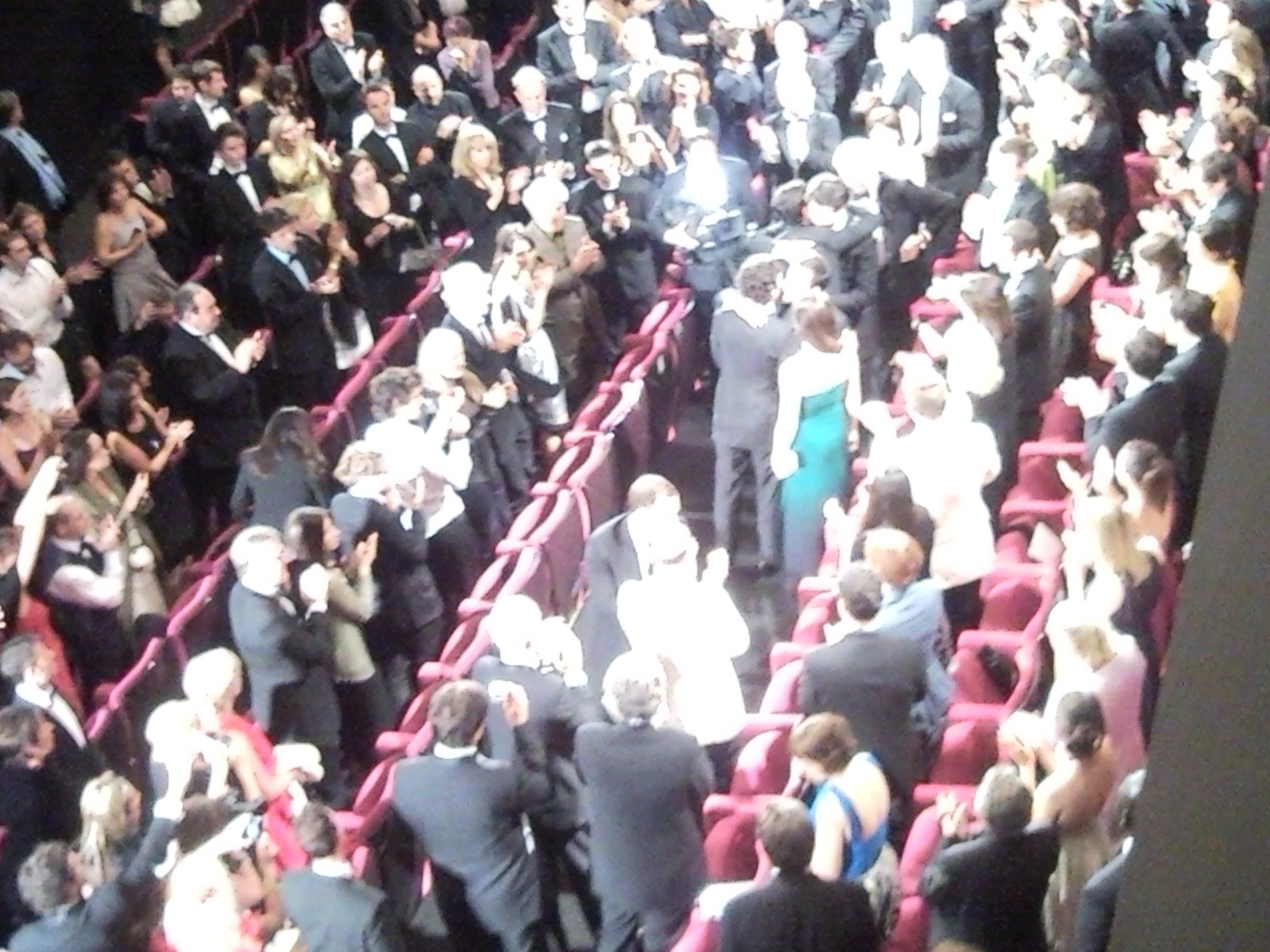 Given its length, and the fact that it started around 10:30PM, the movie ends pretty late, so we quickly go home via the last bus (1:45AM).

End of Episode I.

On Episode II of our Cannes journey, I will tell you all about Monday, containing some well-deserved sleep, Tuesday, with Pedro Almodóvar’s Broken Embraces, Lars von Trier’s Antichrist, and Marco Bellocchio’s Vincere, as well as Wednesday, with Quentin Tarantino’s Inglourious Basterds.
Both the movie, and the very-private party.

How I Survived the 62nd Cannes Film Festival – Episode II

How I Survived the 62nd Cannes Film Festival – Episode III