What is the best UK show no one knows about?

In the past few years, British series (first comedies and then dramas) have become increasingly popular in the US. From poor US adaptations (imitation is the sincerest form of flattery) to broadcasting the original (on PBS or BBC America), the American public is recognizing that there may be TV quality beyond its borders. Yet, with limited (legal?) access to the wide variety of British dramas out there, most of the quality programming from across the pond still has a niche audience.
So what are you missing out on?
This post is based on little-known shows that have yet to be broadcast on American screens (with one exception). That means that, no, Sherlock is not gonna be on this list. Neither are Luther or Downton Abbey. In addition, this is only about current UK series, so no House of Cards or Coupling. 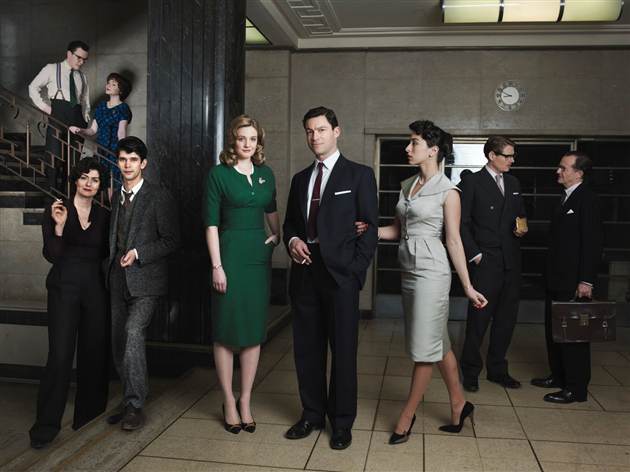 Sadly canceled earlier this week, the show still has two good seasons behind it. It stars Dominic West, Ben Whishaw and Romola Garai and is set in the mid-1950s at the BBC (around the Suez Crisis).
It is true that the first season was broadcast very recently on BBC America (and the second is co-produced by them), but despite this, the show remains fairly unknown at large.
Some are describing it as the UK version of Mad Men, which I can understand if only for the time-frame of the series. Beyond the 1950s angle though, I feel the stories are usually more engrossing than its American counterpart, but maybe that’s the setting. I’m a fan of any show that can handle TV production in a topical manner while still maintaining some level of objectivity. Honestly, you should probably give up Newsroom for The Hour.
Sorry Sorkin. 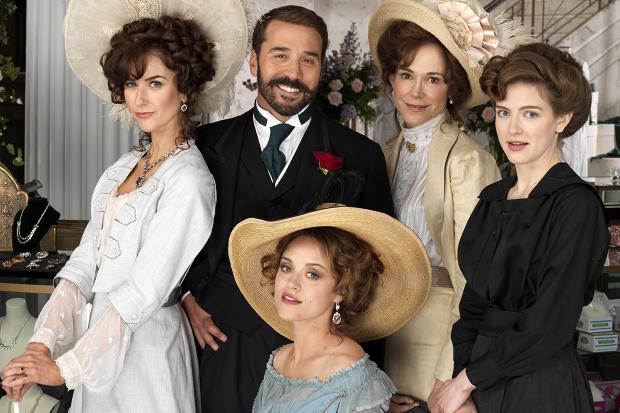 Mr. Selfridge (by Andrew Davies)
Coming back from a long break due to–let’s just say mercury poisoning, Jeremy Piven stars in his first British drama.
The show is already being compared as “the new Downton Abbey,” which, beyond its period aspect, is ridiculous.
Newsflash: any serial will have some soapy element to it (like all the shows on this list), especially one set in a novelesque period like the early 20th century.
The show follows Piven as Harry Gordon Selfridge, an American commonly known in the UK for having founded the Selfridges department store. It is interesting to see the actor in something a little different from what he’s recently been known for (either Entourage or Old School). To be fair however, Selfridge is kind of the 1900s version of Ari Gold. Maybe this is some kind of parallel universe spin-off. 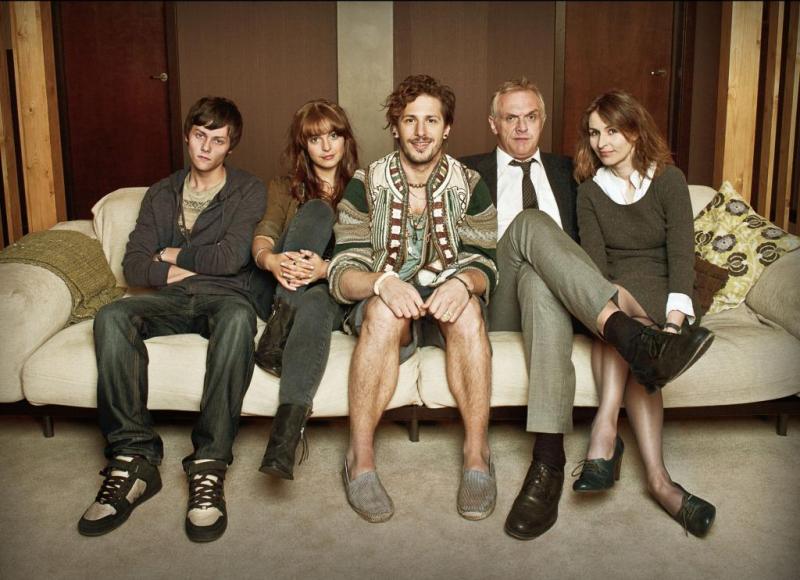 Let’s put a comedy in the mix. Once again, the cast speaks for itself: Greg Davies (from Inbetweeners fame), Helen Baxendale (Emily from Friends) and, wait for it, SNL‘s Andy Samberg as an obnoxious American. That’s right, Samberg is shedding his Lonely Island skin to jump in something actually fresh. The pitch is very simple: Set in the West Midlands of England, the parents of a teenager learn that she got married to a hippy-like American. Although a fun comedy, I have the same issues with the series as with FX’s Wildfred. I can enjoy the humor behind the concept as well as some of the comedy, but it does get tiring after a few episodes. Unlike Wilfred, the show has only six episodes so one can easily finish the season. 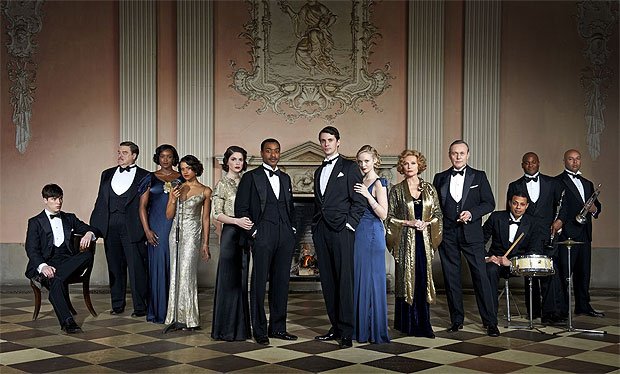 Dancing on the Edge (by Stephen Poliakoff)
Here’s the third period drama on this list. I sense a trend.
Before talking about the show, let me just list the cast:
Chiwetel Ejiofor. Matthew Goode. John Goodman.
Anthony (ex-Stewart) Head. Jacqueline Bisset. *mic drop*
That alone should make you want to tune it to, at least, the pilot.
The show focuses on “a black jazz band in the aristocratic world of 1930s London.” It may not sound like the most compelling logline ever, but the grandiose of the time and engrossing plotlines pull you in (plus, again, superb cast). I widely prefer it to the latest season(s) of Downton Abbey (sorry, I’m not that interested in Bates’ prison routine).

At this point, I also wanted to give a nod to a few UK dramas from the past couple of years that have since ended, but should still be recognized for their quality.

The Shadow Line (by Hugo Blick) 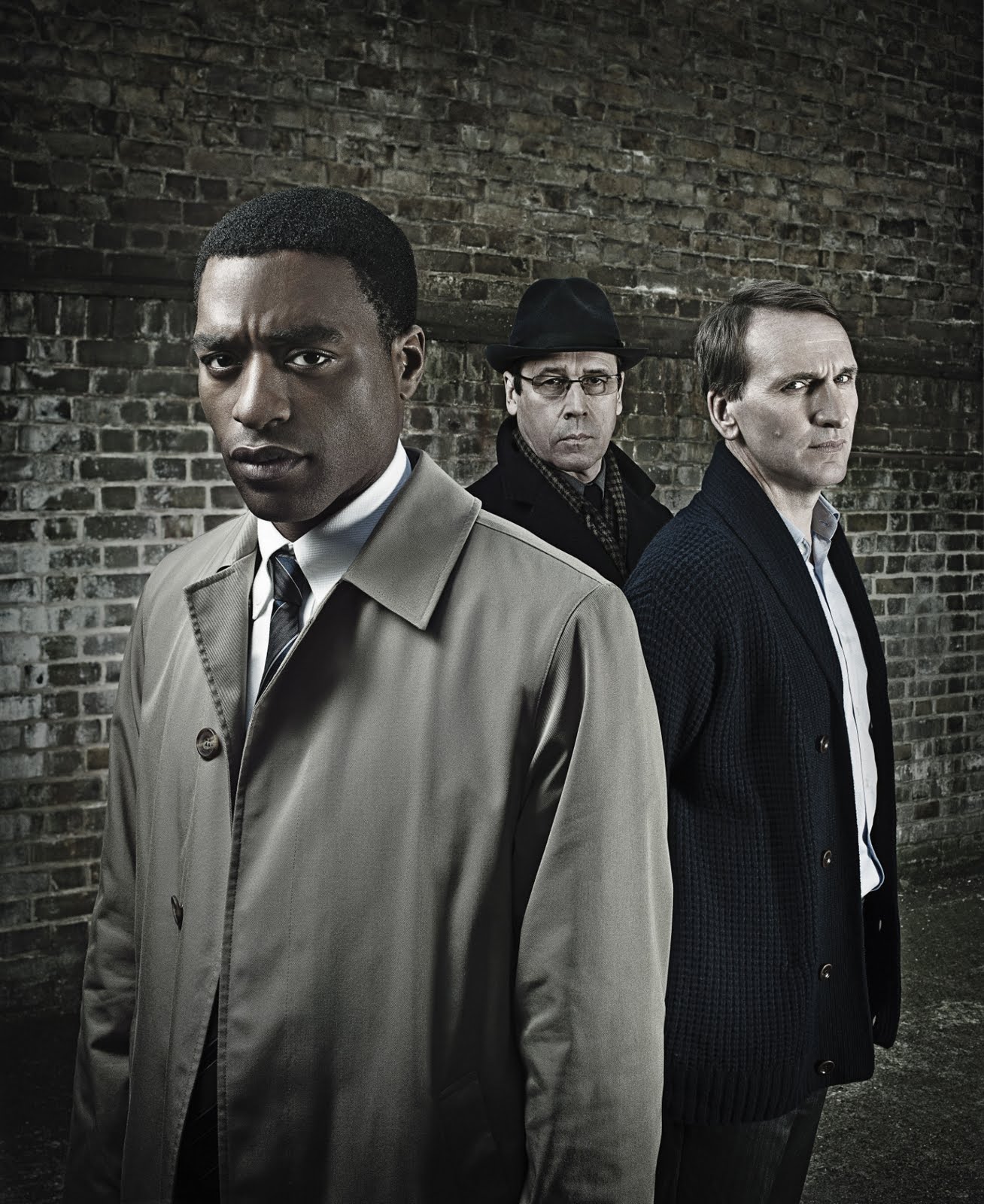 First I need to acknowledge an awesome 2011 British mini-series by Hugo Blick, also featuring Chiwetel Ejiofor. The show stars on top of that Christopher Eccleston, Rafe Spall, Stephen Rea and Richard Lintern. Pretty solid casting if you ask me.
Since I’m lazy, I’ll just quote Wikipedia as to the show’s description: “The Shadow Line is about a murder investigated by both sides of the line – police and criminals – and the opposing methods they use to solve it. But the real line is the morality within each character and how far they will go before they cross it”
Sounds like The Departed/Internal Affairs. It kind of is, but with seven episodes, you can guess that it goes deeper (not like Inception). It opens on a murder, and from there everything goes to shit. Shadow Line goes dark with pretty much no redemptive value for its characters (no white knight here). You’ll probably end up hating (or at like dislike) most, if not all of the people, but the story is so engrossing that it does not matter in the end.

Inside Men (by Tony Basgallop)
This mini-series came and went with four episodes starring Warren Brown, Ashley Walters and Steven Mackintosh (who looks like a British Dylan Walsh). Like anyone who knows me can tell you, I like structure, especially when it is played with successfully. 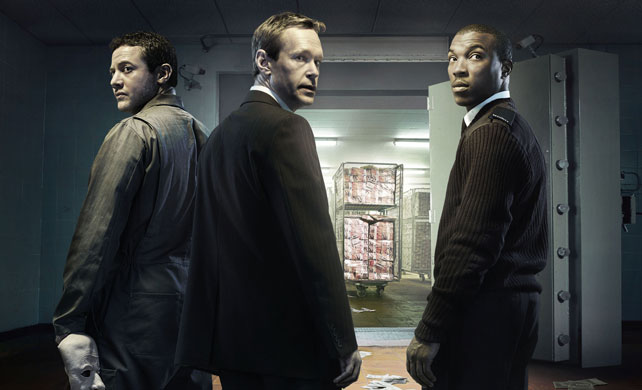 Inside Men pulls the trick of telling a fairly classic story (armed robbery) in a very interesting way: flashbacks and flashforwards. Yes, I do enjoy my time jumps and flashes. In this case, it works really well as beyond simply witnessing the robbery itself (which legitimately should not last more than an episode or two anyways), we go through the events that lead up to it, as well as the aftermath (going months after). For such a short series (again, four episodes), Inside Men was very entertaining. Warning: the ending may disappoint some people (I was).

There you have it.
Almost.
There’s one more show.
*anticlimactic drum roll*

And the best UK show no one knows about is…

Black Mirror (by Charlie Brooker)
[Alright, alright. I’ve been talking about this show for the past two years now, so you probably already know about it. Doesn’t matter because, despite my incessant need to mention this show, most people have no idea what I’m talking about. Plus it is legitimately (one of?) the best show on this list.] 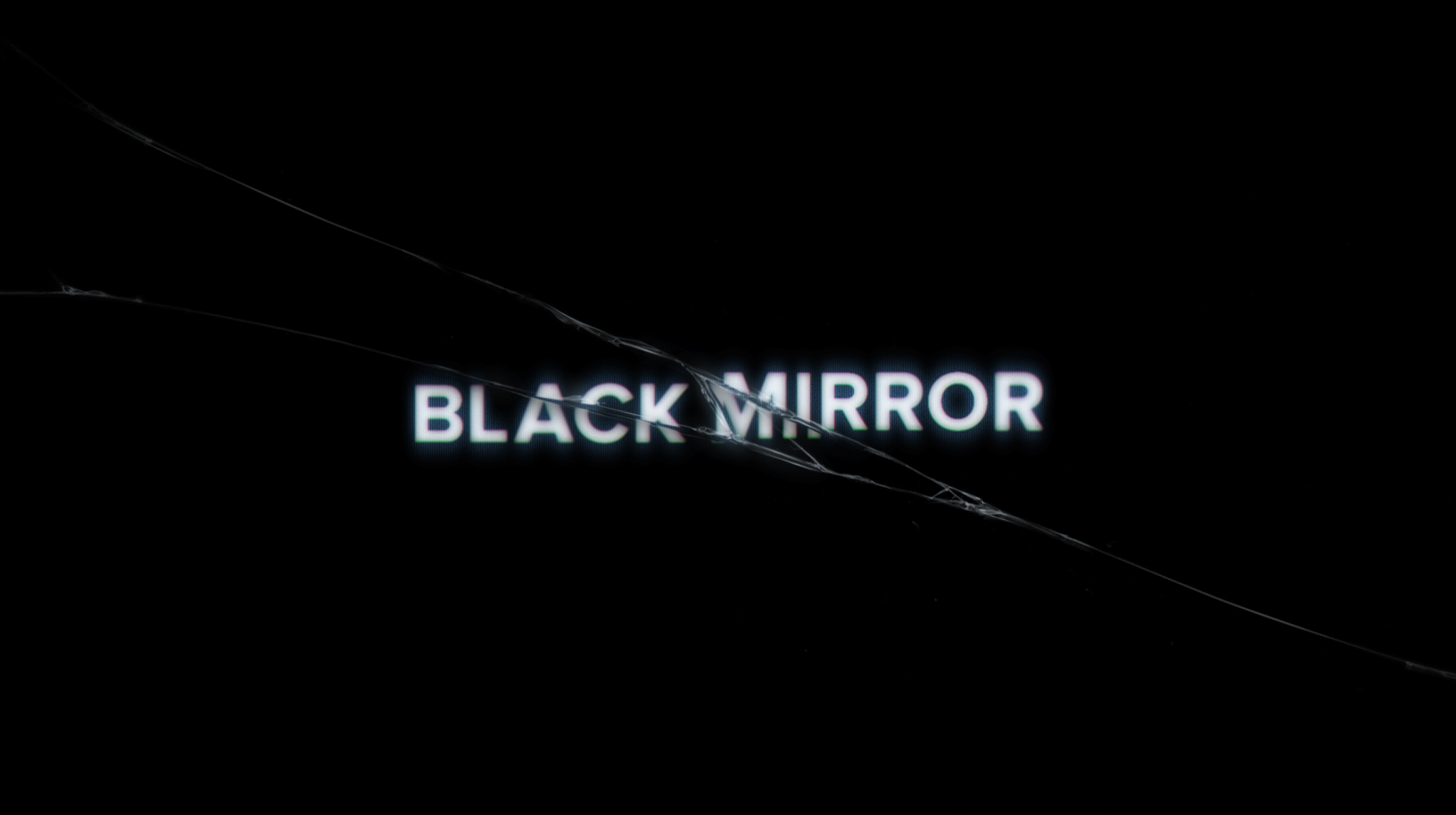 So, what is Black Mirror?
Simply put, it’s an anthology series. Like all good UK series, a “season” is only made out of three episodes (albeit 1-hour instead of 90-minute movies like Sherlock).
As soon as you mention anthology series, The Twilight Zone and The Outer Limits are brought up. You can calm your excitement because Black Mirror has virtually nothing to do with either. Although Twilight Zone/Outer Limits (and even Tales from the Crypt) were structured around some kind of moral wrapped in a (literally) fantastical metaphorical tale, Black Mirror is more about the unease in our current modern life.
I probably lost half of you with that sentence, but it’s way more interesting than it sounds.
Black Mirror oftentimes likes to take one aspect (or problem) of our technological culture/future and turn it up to eleven. The most obvious example is undoubtedly “The Entire History of You,” the third episode of the first season, which takes the concept of life-logging to its extreme. In a future where everyone has an implant capable of recording every sight & sound one experiences, a man goes crazy trying to figure out if his fiancée is cheating on him (by reliving memories).
Surprisingly, Robert Downey Jr. optioned this particular episode and is planning to make a feature version of it. Honestly, I’m not a big fan of the idea simply because it’s rarely a good idea to beef up a novella into a full novel. On top of that, I think the 2002 movie The Final Cut did a brilliant job of turning a similar concept into a thriller piece.
Going back to Black Mirror.
The first episode of the second season premiere this past week. Unlike the first season, the show doesn’t seem to go in as bleak a direction. As Charlie Brooker said:

We’re trying something slightly different. I didn’t want them to all just be bleakly depressing. One of them doesn’t have that much dread in it, and one of them has more dread than you’ve ever seen, so we’ve portioned out the dread in slightly different quantities! Last time there was always a point where someone smashes everything up in a rage, and they don’t all reach that point this time around. A couple of them are slightly more delicate, and then there’s one that’s a right old fist in the face.

I’m personally very interested to see what this very, very bleak episode is going to be like.
In addition to using “near-future” tech in pretty much the most realistic portrayal I’ve seen on TV, Black Mirror is truly about characters. The most successfully emotional scenes are the ones with only two characters interacting, bare bones. It may sound ridiculous to think that such a high-concept series is that good, but Charlie Brooker and his writers are excellent at capitalizing true human emotions and real drama out of preposterous concepts (I can’t bring myself to pitch you the first episode).
This is the ultimate example of the oft-repeated adage: ‘It’s all about the execution.’
That is why Black Mirror is the best UK show currently on TV.

Three men and a show

The Jay Leno Show: Is that it?