Today, we take a look at one of the greatest British sitcom, Coupling.
You might know the series from its infamously aborted American adaptation, but just like pretty much anything, the original by Steven Moffat is vastly superior to its remake.
Though similar to Friends, the show ends up being quite different from it, both in its length (four seasons of six 30-minute episodes), and subject matter (sex is omnipresent for one). 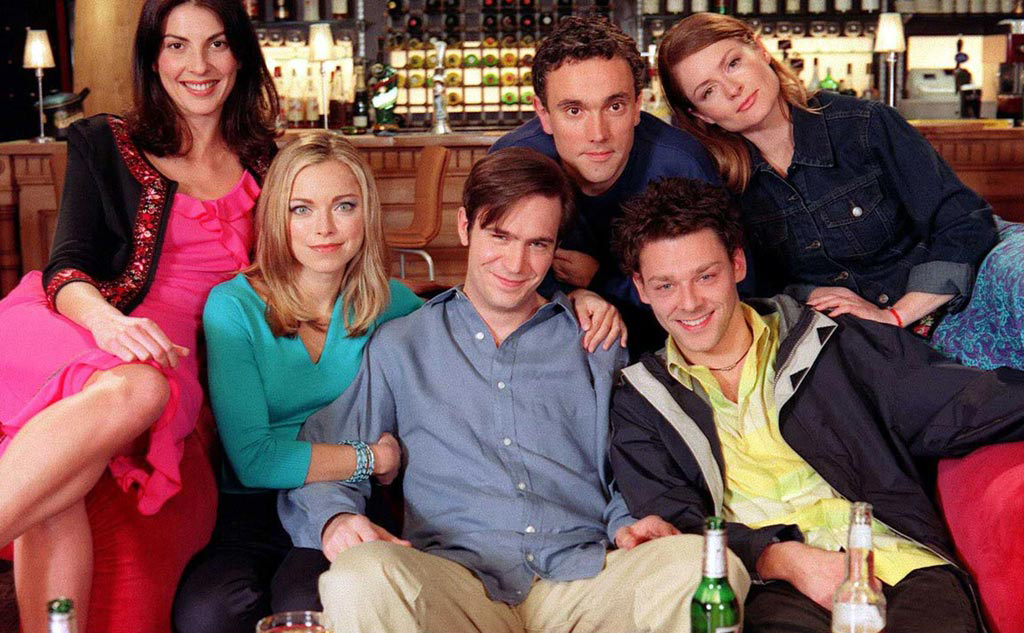 Coupling is built around the relationship of six friends, but more than that, the peripeteia stem from their adventures outside the group.
Some jokes on the show might seem easy, or downright idiotic, but the truth is there are “no jokes per se” as Steven Moffat puts it. The humour comes from the context.
This ties back to the true essence of sitcom, or rather situation comedy.
Most of the memorable scenes of Coupling are exactly what makes the genre so appealing: comedy through situation, double-entendres, and other qui pro quo (not to be confused with quid pro quo). There are no punchlines or zingers on the show, it’s all about what the audience knows vs. the characters. This allows you, the writer, to play with two key aspects of TV series: character points of view and audience expectations.
Qui pro quo are classic and traditional, but they works extremely well when done right.

Bold and ballsy are not incompatible with the classic multi-camera format. Sometimes, you shouldn’t be afraid of avoiding the cookie-cutter and go where no show has gone before.
Multi-camera might seem at first constrictive but it might actually end up being the complete opposite. Moffat understood perfectly that the format was going to have to evolve, and he used this as an advantage.
Coupling thrived with its innovative use of storytelling. Rarely (if ever) has a sitcom so successfully utilized such a wide variety of non-linear techniques.
The main episodes that spring to mind are The Girl with Two Breasts, Split , The End of the Line, and Nine and a Half Minutes.
Don’t get fooled by the titles.
The Girl with Two Breasts played with the qui pro quo to a new extreme by introducing a foreign language. Almost half of the episode was in Hebrew, with most notably a crucial exchange between an Israeli woman and one of the main characters. The tour de force employed in the series was to show the same exact scene once more, only this time with the Israeli woman speaking in English and the other character in gibberish (ergo from her point of view).
Though the idea of showing back-to-back the same scene may seem almost ridiculous, the gutsy (and well executed) move actually paid off and proved extremely popular.
From that moment on, each season had at least one “epic” episode, as Moffat called them.
The second in the list is Split. As the name implies, it used throughout the entire episode a continuous split-screen (to showcase the split between the two main characters).
As always, the episode was filmed in front of a live audience, which means that, thanks to the multi-camera format, they had to shoot the two sides simultaneously on two different sets. Hilarity ensues.
Once again, this is a truly awesome use of what has since become more of a gimmick (I’m looking at you 24).
The End of the Line and Nine and a Half Minutes use the perspectives of different characters by showing different angles and POVs. What is great is how the various scenes intersect with one another, providing each time additional information regarding what came before (or will come after).

Sitcom and serialized storytelling might seem antinomic, but in truth, even the most rudimentary comedy will have some form of continuity: relationships.
If anything, television is the land of characters, and especially in sitcoms you need to embrace that.
Somewhat like Arrested Development (though less pronounced), Coupling had numerous references to past episodes and small details. Beyond that though, the relationships between the characters evolved organically and clues regarding what was to come were disseminated throughout the show.
It wasn’t a surprise then when a Season Two episode “flashbacked” all the way to the Pilot to provide additional perspective on a certain relationship.
Don’t be afraid in your script to leave some questions/relationships open, even if it’s a comedy. After all, a pilot needs to set up the world. You don’t necessarily have to enter a super-serialized form of storytelling (especially for a sitcom), but don’t necessarily presume your audience is made out of amnesiacs. Even Friends had arcs.

What to take from the show

The audience has expectations that need to be managed, characters have points of view that must be thought out, and situations have perspectives that can (and should) be manipulated.

6 Screenwriting Lessons from Parks and Recreation