It has been almost a decade since NBC’s Friends bowed out from our screens.
As the Blu-Ray/HD remasters of the show came out in the past few months, I decided to re-watch all ten seasons of one of the greatest television sitcoms in history.
It may appear dated at first glance, but the humor is still fresh, and the comedy lives on. 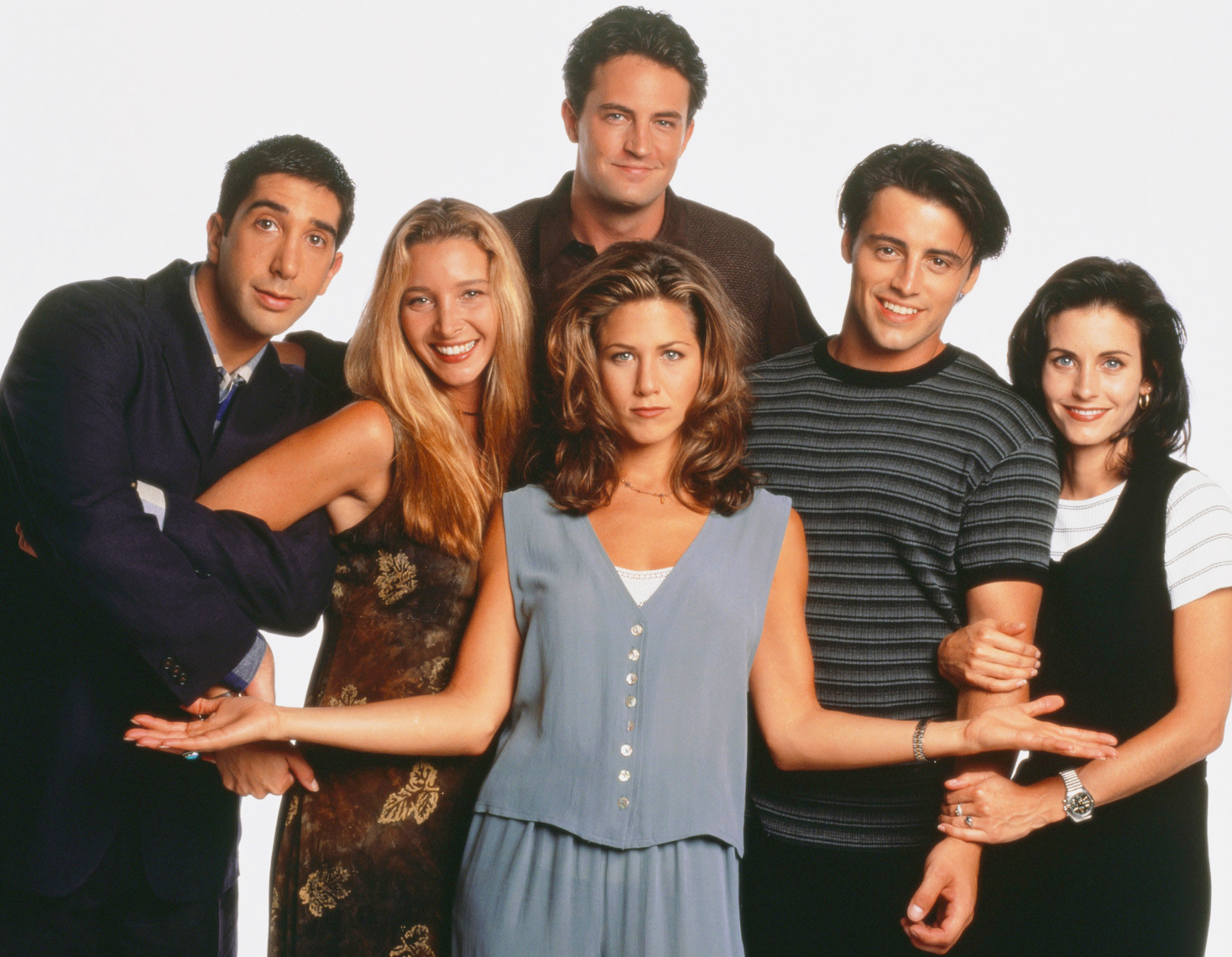 Lesson 1: Sitcom is about situation comedy

It seems a lot of contemporary comedies forget the very concept behind their existence.
As much as I enjoy 30 Rock, or even Big Bang Theory, a substantial portion of the jokes and humor is very derivative. This isn’t necessarily a bad thing (in small doses), but when all you can offer is references and pop-culture callbacks, you’re missing out on the actual definition of the genre you’re in. Situation Comedy.
Another upside to limiting references is, simply put, increased playback value. The content ends up being very accessible to a wide audience. If you don’t know anything about the Hunger Games trilogy (either now or in ten years), you may not be entertained by the recent Community episode. Friends was perhaps one of the most “sitcom” sitcoms. You don’t need a pop-culture dictionary to “get it.” A lot of the humor of the show stemmed from interesting and/or comedic situations between the various characters. In other words, life.
One of the best episodes of the series is undoubtedly “The One Where Everybody Finds Out.” To recap, Monica and Chandler have had a semi-secret relationship and have been trying to hide it from the other friends. As the title of the episode indicates (spoiler alert), everyone ends up finding out about the couple. The real power of the show is to turn what amounts to a TV trope (friends trying to hide their secret romantic relationship) into a legitimately funny and fresh concept. The idea is not new, but the execution is ridiculously fun. There’s a key scene in the show where Phoebe and Chandler are testing each other out to see who knows what about the secret, and we (the audience) know the truth. In that moment, the laughs come from the imbroglio within the situation. We know, they know, but no one wants to admit it. Comedy in the situation. Which brings us to my next point…

An often overlooked facet of comedies is the emotional component. The climax of the Friends scene I just mentioned is not the jokes milked from the concept (Phoebe v. Chandler), rather the honest truth behind the scene: Chandler’s true feelings towards Monica. As Phoebe is about to kiss Chandler, he finally admits that he is actually in love with Monica. The comedic situation turns into a pivotal “can’t-miss” moment based on the characters. All of this comedic build-up is meaningless if it is not attached to something real. You can make as many jokes about Chandler being gay, but they’re rooted to the character’s insecurities with women. Without the emotional baggage (and out of this context), they may seem childish (if not downright offensive).
Truth in characters also means truth in emotions. If we look at another comedy, Modern Family is very successful in part thanks to its emotional resonance. People can recognize themselves (or their family) in the Pritchetts. The same can be said about our “Friends.” We can engage with their stories, and lives, because most likely we have lived through similar experiences. In ten seasons, it would be hard not to come up with a single example.

It may seem redundant with the previous lesson, but I thought it was important to distinguish emotional/character moments in scenes versus full-blown arcs over the course of several episodes/seasons. More importantly, it may seem counter-intuitive to disregard story arcs, yet it is especially true for sitcoms that, in the long run, characters prevail over story. A multi-cam, by its very definition, has a much more limited scope than its single-cam counterpart (location, visuals, production, etc.). This means that choices have to be made from the get-go (i.e. the script) about how the story is going to unfold. It then makes perfect sense that the focus will end up being on the characters rather than, say, the locale.
What you end up remembering from Friends is Ross and Rachel’s on-and-off tumultuous relationship throughout the years, not the many (fancy) jobs of Rachel. You remember Chandler’s evolution from man-child to husband. Sure, you may fondly look back on “that one trip to England” (aka “The One with Ross’s Wedding”), but what sticks is the pay-off from a character’s stand-point (in this case, Chandler and Monica beginning a relationship). “The One After the Superbowl” is often derided and considered one of the worst episodes because of this very issue. No one cared about the stunt-casting and crazy LA peripeties. Ultimately, small-scale wins.
Does that mean you should just abandon story arcs? Hell no. One arc does not mean you overlook the other. They are both interconnected. Context is important within a comedy, you need a story before you get to the point of it. Where the distinction lies is simply the reason why viewers will be watching your show. Although it may be fun to follow Phoebe’s wacky adventures, what we care about is her reactions to said adventures.

Lesson 4: Don’t be dependent on the laugh-track

One of the reasons given behind the seeming decline of classic multi-camera sitcoms in the last decade has been the over-usage of the laugh-track. More specifically, as a crutch to the constant jokes ([insert laugh]). Yes, the show is filmed in front of a live audience, but laugh-tracks are used. In fact, after watching a decade’s worth of Friends, I started noticing halfway through the show very noticeable, particular, recurring laughs (also used now in How I Met Your Mother). Are people trying to over-compensate for something?
It is important to note here that there is a difference between relying on live audience and relying on a laugh-track. Multi-camera sitcoms are re-written on the fly to suit the audience’s appreciation of the humor. More times than not, laugh-tracks are used to impress upon you that this moment is funny, and you’re wrong for not laughing (Peter Griffin would say that it insists upon itself). Although one of the kings of laugh-tracks, Friends used it sparingly to reinforce genuinely comedic moments.
The content of a multi-camera sitcom should be tailored, not to coincide with the “beat” of a subsequent laugh, but simply to its context. In other words, you should write a script without thinking about where the laugh-track would go. It may sound obvious, but I know a few people who picture the finished product in their mind while writing it, which may end up being a derailing element.
Write what entertains you, not what you think others will be entertained by.

If you think about it, the format of a multi-camera situation comedy seems fairly odd (within a television mind-frame). “Live” fiction taped in front of a live audience which is re-written on the fly, then edited and finally broadcast for the world to see. In truth, a multi-cam is the closest analogous art-form to actual theater. I would argue that classic sitcoms nowadays have “lost” this idea and are focusing on, say, puns or references rather than theatricality (see the first lesson learned).
As we’ve seen, Friends‘ tour de force was that, on top of its running storylines and other clever jokes, the entire framework of the show (especially after its first couple of seasons) truly revolved around the interaction between the characters and with the audience. This went beyond the simple comedic situations. The clearest case of that is undoubtedly Ross’ antics. It may be hit or miss for you (perhaps even over-done in the second half of the series), but its importance to the character and the show’s humor is undeniable. The bumbling professor’s physicality, the way he interacts with his surroundings, or express his sentiments, are all part of his own theatricality. This may seem like something that is entirely dependent on the actor(s) and the directing, but the reality is that much of it is relevant to writing. More specifically, the scenery and set-up. A talented actor will enhance the content and bring to life a character that should be inherently funny on the page. You too can use the stage, on your page.

What to take from the show

The key to a successful multi-camera sitcom, both on a creative and popular level, seems simple: stay true to your stories, stay true to your dialogue, and stay true to your emotions. Play with the situation, the characters, and the audience. Humor can be everlasting if, even taken out of its context, laughs can be had.

6 Screenwriting Lessons from Parks and Recreation