The Failings of Breaking Bad

Much has been said about Breaking Bad over the past few months. Virtually all praise. As a matter of fact, I adore the show (hence this entire week of articles).
Before we get to the adulation and deconstruction of why this is such a ground-breaking show, I thought it was important to at least talk about some of the (few) problems it has. This isn’t needless bashing, as I’m not here to denigrate the oft-lauded classic traits of the show (e.g. cinematography, directing, montages, etc.). The article is about storytelling points I’ve had issue with.
I’ll be getting pretty critical on some specific aspects of the show in this column, so please don’t get upset. I still love Bad.
Warning: I’ll be talking about everything up to the pre-finale, so beware if you haven’t seen the final season (five).

We’ll see later this week how one of the show’s greatest strengths is to “bathe in the mystery”. However, there has been one occasion of a tease that, not only didn’t payoff in a satisfying manner, but felt like an unnecessary lead on.
I’m of course talking about the season two flashforwards. Before the bearded Walt from season five, we had a black-and-white pool with a pink teddy bear. That damn teddy! 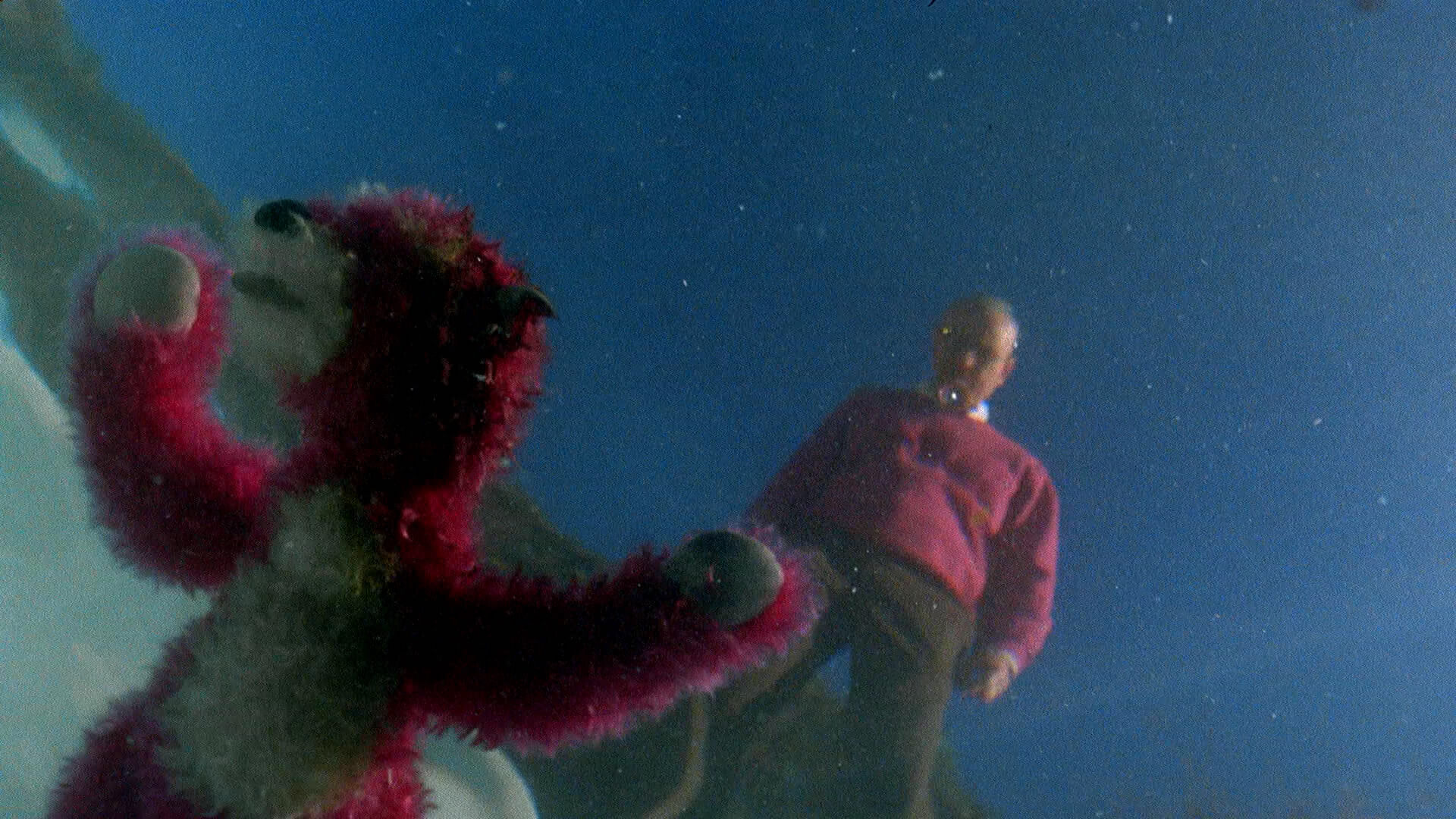 As a fervent viewer of the show since day one, that season two buildup was one of the biggest cock-teases in recent TV history. It wasn’t as bad as Lost‘s smoke monster, or Battlestar Galactica‘s Cylon plan, but for a season-long mystery, it was definitely a miniature version.
It may not play out the same now, as you binge-watch the show, but when it came to a weekly viewing, the resolution of such an extended teasing was nothing short of a slap in the face.
To recap the storyline, I’ll quote the Breaking Bad Wiki:

As teasers, they led to the illusion that there had been a tragic event, possibly a meth related explosion at Walter White’s house as authorities in hazmat outfits are seen collecting personal effects and placing them in evidence bags along other damaged items. Amongst the items are a pair of eyeglasses similar to Walter’s. Adding to the illusion that a fire was involved, a scorched pink teddy bear, the main focus of each teaser, is the only item seen in color. An overhead shot of Walt’s Pontiac Aztek with a damaged front windshield and emergency personnel in hazmat outfits close the zipper on a pair of white body bags. The shot pans upwards and fades into a full color wide shot depicting two large pillars of black smoke that are billowing in the distance behind Walt’s house. The teasers actually depict the aftermath of the mid-air collision of a Boeing 737 commercial airliner, Wayfarer 515 and a chartered plane.

(Fun fact: the episodes with the flahforwards have their combined titles spell out “Seven Thirty-Seven Down Over ABQ”.)

Four years ago, I talked about how binge-watching serialized shows virtually erases any viewer frustration from dead-ends or poorly planned plotlines. But this isn’t exactly the same.
Ironically, season two of Breaking Bad was the only one completely planned-out from the get-go, as the writers were breaking stories. I say ironically in that the conclusion was so ridiculously irrelevant and pointless that one could have made it up on the spot. Yes, I’m already aware of the symbolic behind the dramatic “crash”. I’m talking about how it (doesn’t) serve the storytelling itself.
Had there been no flashforwards, perhaps this wouldn’t be an issue in the first place. Yet the writers made a deliberate decision of having these teasers hinting at something bigger. And it ended up being a “gotcha!” moment.
Again, I understand the point of the final scene, but what I don’t really understand is why the peppered flashforwards were needed throughout the season. It’s as if they didn’t trust that their already-compelling narrative would be enough to sustain a week-to-week viewing. I don’t need a hook to watch a Breaking Bad episode.

Hands-down, my single biggest issue with the entire run of Breaking Bad is the first half of season five, aka the first half of the final season.
And it all starts with another egregious use of a flashforward: the opening of 5×01 (“Live Free or Die”).
Like the pool flashforwards from season two, it seems the writers were attempting at teasing towards something consequential happening in the near future of the show (albeit this time with an actual payoff — the end).
Unlike the “crashforwards” that didn’t lead to anything, this latest example actually reveals too much. I had (almost) nothing negative to say about the show, up until that damn opening. 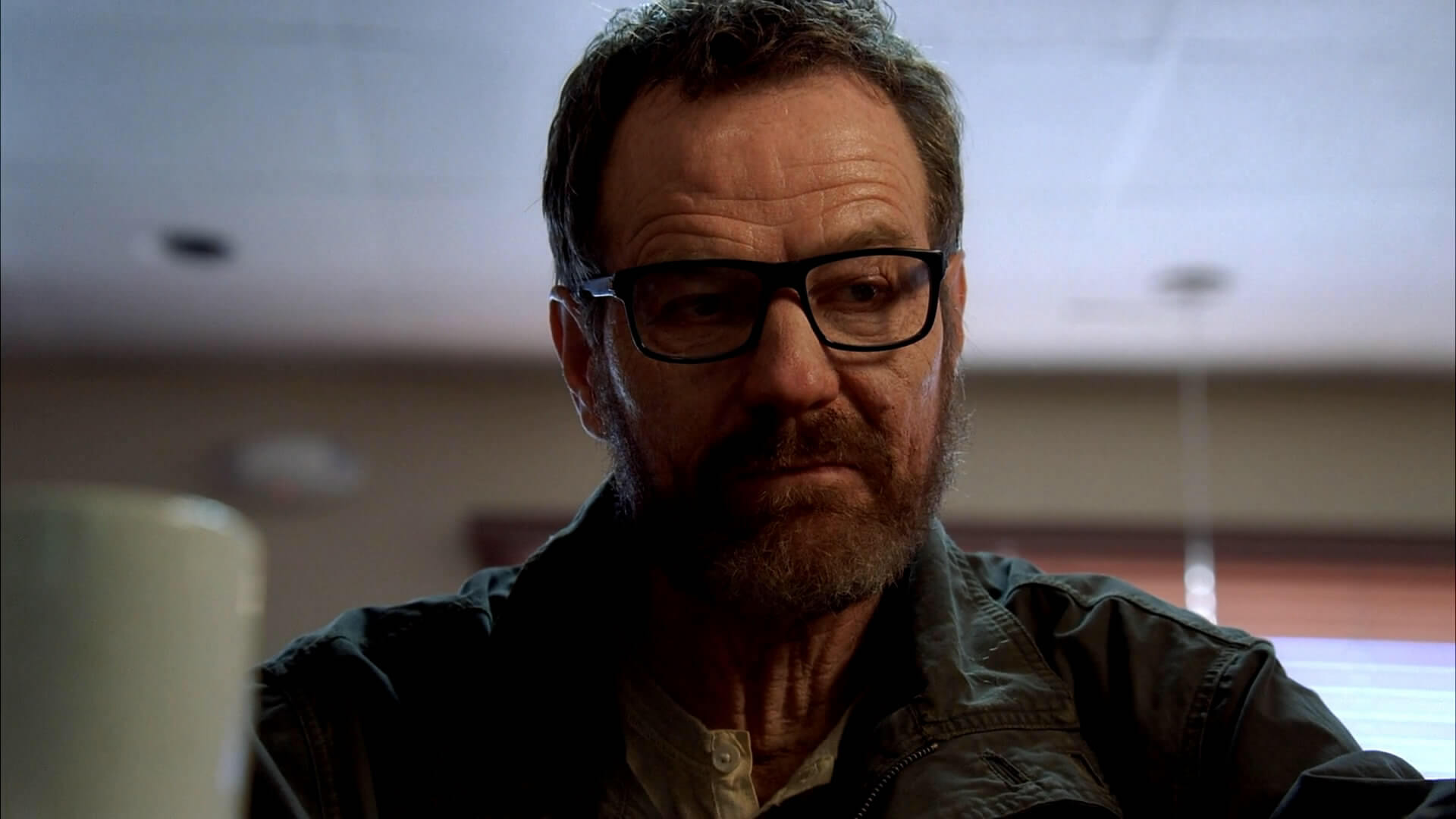 A 52-year-old Walter White Lambert enters a Denny’s to buy a “say hello to my little friend” machine gun. New identity. No wedding ring. Back on meds. Alone.
In the span of four minutes, the show has already spoiled to its audience how it ends. A full year and fifteen episodes in advance.
As soon as I saw that 5×01 opening, I was afraid that they were showing us what amounted to the series finale (or what came right before it). They had spent a single year (in-world) on five seasons, and the flashforward occurred a further year after that. In other words, it didn’t seem like they would have time to cover such an amount in just a few episodes.
I was hoping I was wrong, that they would get to that point by the half-season. They didn’t.
I compare it to this “what if” scenario in Battlestar Galactica (spoiler alert): if season 4 (final season; also cut in half) had started with a flashforward of the BSG crew on the second Earth (i.e. the green pastures from the series finale), then their arrival would have been devoid of its emotional impact (at least most of it).
Same thing with Breaking Bad. You could easily connect the dots, from his cancer returning, to him using Saul’s disappearer from the fourth season, the loss of his family, and his revenge kick.

Even worse, they spent the entire half-season around a tertiary plotline (Madrigal/Vamonos Pest), which had virtually nothing to do with the overarching series stakes in Walter White’s story (especially after that flashforward).
To go back to my BSG analogy, had the show used the Green Earth flashforward, the first half of the season would have felt like a waste of time, and fans would have been pissed. “Who cares about this fake/desolate grey Earth? I want to get to the real one you showed us!”
Despite four seasons of great pacing, that first half of season five was almost complete filler. For the first time, Breaking Bad was stalling.

The “point” of that half-season was to get Walt to quit his empire business, which is something they could have spent several episodes on, instead of just one montage in the mid-season finale (see time management). I also “get” that there’s an overall point about Heisenberg’s blue legacy, and I’m sure the finale will echo that sentiment (perhaps around its final scenes). That doesn’t mean half of the final season needed to be served as buildup for this single purpose. There are just so many more rewarding stories that could have been told or expanded in those eight episodes.
Mike died at the end, but a more impactful climax would have been something involving Hank’s demise (transposing his pursuit of Walt from the back-eight to the first half). Between some “legacy costs” subplot introduced a season ago, versus four seasons of built-in rivalry between two brothers, which one has more weight for eight episodes? It was never about Hank vs. Walt, but given how small that storyline ended up being in the last few episodes, it’s the kind of plotline that deserved of a full half-season (especially given all the build-up and anticipation).

One year. That’s how long (in-world) the show has lasted, at least until the fifth season.
As we’ve seen, if there’s something problematic with Breaking Bad, it is how it (sometimes) handles time. Sadly, this doesn’t stop with flashforwards.
Of course, this is TV, so I’m not really bitching about “so many things happen in just a year”. My real problem stems from the way the show has portrayed time.
If not for the 51st birthday bacon platter, would we even realize five seasons of the show only comprised one year? 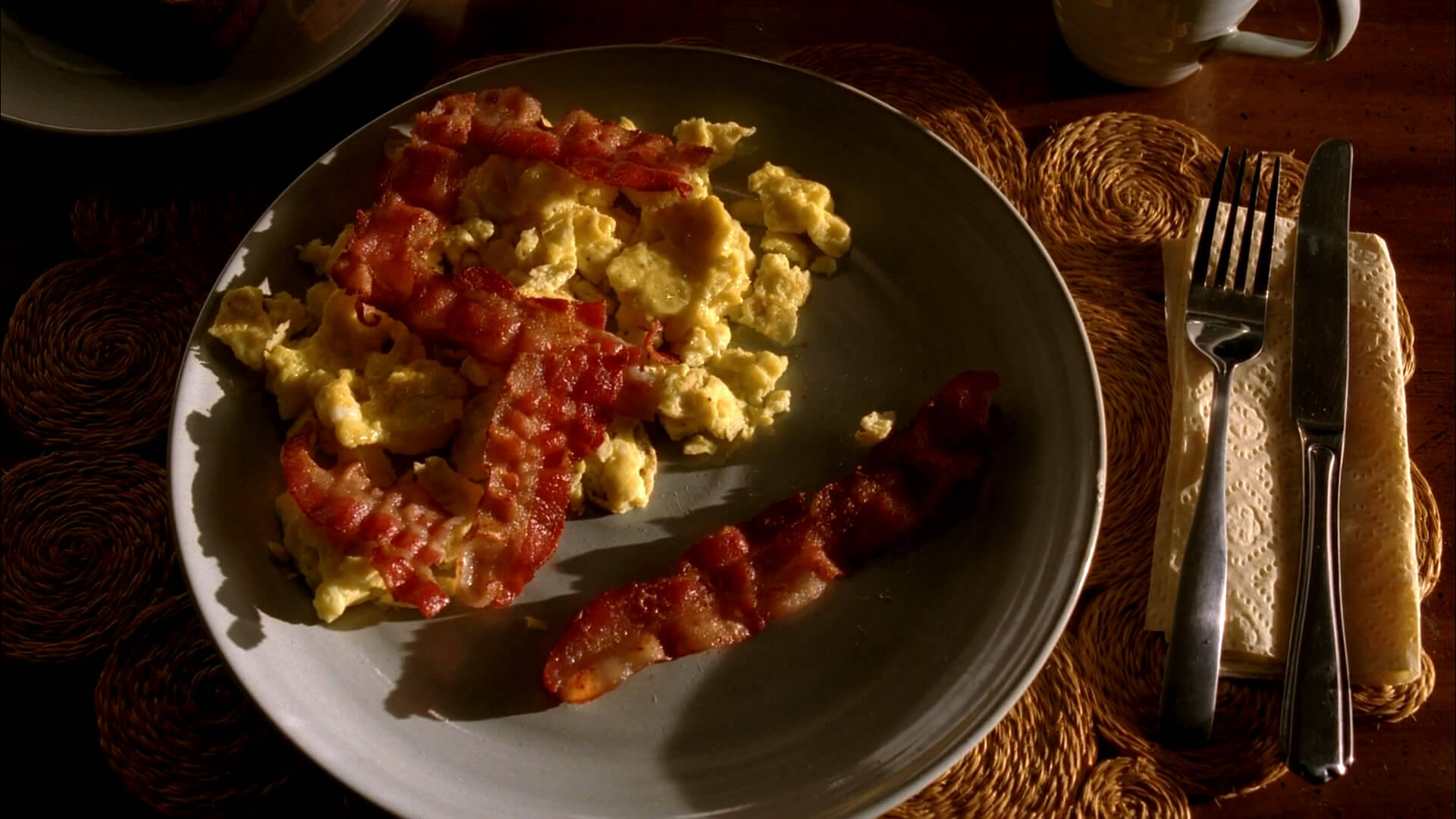 I’ve been loving this final half of season five, however my timely issues seem to be creeping back up as we reach that flashforward moment. Namely, in 5×15 (“Granite State”), as Walter White, under his new identity, is “safely” tucked away in his New Hampshire cabin. In the episode comes probably the biggest time-jump in the show’s history (about six months). We come back in Act 3 and notice Walt’s aging (thanks to his hair and beard). The problem is that this passage of time isn’t felt or even seen.
In fact, I would say that out of Breaking Bad‘s multiple “passage of time” moments, this one is probably the most important. This is, after all, the one where we catch up to the aforementioned flashforwards (from 5×01 and 5×09).
Regardless of how easy or not it was to “guess” what happened to Walt, the transition (both physical and emotional) from his Heisenberg character of five seasons to this dwindling old man is the crux of these final episode. And yet, we barely see any of it. This seems to be another case of compelling drama, hinted at by the storytelling, that is never paid off. The devolution is never shown.

This kind of goes against the many “time flies” montages, most notably the (now-classic) “Crystal Blue Persuasion” from 5×08 (“Gliding Over All”), which was there to establish Walt’s retirement. In the pre-series-finale, he’s learning all these things about his family (e.g. Skyler changing career, house in auction, etc.), and it’s tearing him apart. Almost all of it is implied (or said by Robert Forster in one-liners). Breaking Bad has always been a show about the moments between the moments. This is the kind of drama it should be showing instead of telling.
You could argue that there are only two episodes left, so you can’t spend too much time on that. But we just covered the fact that the first half of season five was a lot of filler. If you move forward the Hank storyline to Season 5A, then you’ve got 5B to cover Walt’s downfall (instead of a single episode). Although we’re not making Breaking Bad fan-fiction here, so I’ll stop talking about hypotheticals.
Bottom line is the episode should make you feel like six (or more) months have passed. There’s virtually no indication of that, as we’re only being told what happened to Skylar et al. It feels like a great disservice for something that is: 1) centered on the most important characters, 2) hinted at with two “wait for it” flashforwards, and 3) an integral part of the end run of the show. I understand there’s no point in showing Saul’s wacky adventures, but even a montage of the Whites in New Mexico would not have detracted from the emotional toll of Walt’s isolation.

Ever since Lost “mainstreamed” the storytelling device, plenty of shows have used and abused flashforwards. Breaking Bad is just the latest on the list.
Fortunately, the show won’t be remembered for these failures, as we’ll see in the next few posts.