The iPad: Where’s the objectivity?

I came across an article by New York Times’ David Pogue about the polarizing aspect of the iPad.
He writes:

The haters tend to be techies; the fans tend to be regular people.
Therefore, no single write-up can serve both readerships adequately. There’s but one solution: Write separate reviews for these two audiences.
Read the first one if you’re a techie. (How do you know? Take this simple test. Do you use BitTorrent? Do you run Linux? Do you have more e-mail addresses than pants? You’re a techie.)
Read the second review if you’re anyone else.

Besides the fact that this article is stuck in a 1999 cliché of what a “techie” is, my problem with this is Pogue gives a false sense of objectivity (showing both sides of the coin).
The thing is, not only is the so-called “anti” review comprised of just a basic spec list, but the whole article is overwhelmingly biased towards the iPad.
The “pro” review (three times the size of its counterpart), praises the same aspects of the tablet that, well, everyone else seems to praise (regardless of if they’re actually good/relevant/comparable, or not).

As I was reading through the review, it became clear that the author was enamored with the device – and so was the rest of the press corps.
Save for those few “techie” websites, every news outlet raves about the iPad, totally disregarding its many flaws.
Everyone is saying how “revolutionary” is is. And both Newsweek and Time have made iPad their covers.

The problem is that they’re buying their own hype. 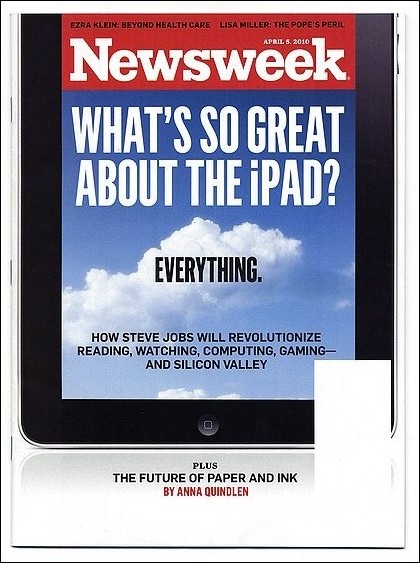 Apple declares the product “magical”, and then on the other end the press emphasizes it to the point where you don’t know if some massive brainwash has occurred.

It’s as if people are more than happy to jump on the Apple bandwagon instead of taking a step back, and provide reasonable critical thinking.

The press is duping the public in thinking that a severely limited $500 tablet is better than a versatile $300 computer.
We all know people love to touch their stuff, but come on.
You can’t throw away all your other devices (laptop, home-computer, phone), and just use the iPad (that kinda looks like a clunky iPhoto Frame).

Apple knows their niche and exploited it to the max.

After spending hours and hours with it, I believe this beautiful new touch-screen device from Apple has the potential to change portable computing profoundly, and to challenge the primacy of the laptop.

If I understand this right, a tablet with a 4:3 screen and the same processor as my phone will replace my computer that has ten times the specs and power.
I’m sorry but intuitiveness is not the only thing that should make or break a technological device. Especially one that is positioning itself as a laptop-killer.

Going back to the New York Times article:

The iPad’s killer app, though, is killer apps. Apple says that 150,000 existing iPhone apps run on the iPad.

How are phone apps working on a fake laptop supposed to be a “killer app”?
For that matter, how is a laptop having apps anything new?
Ever heard of something called “software”? You know that your netbook can run programs too, right?
And they’re not limited by the iTunes store.
I can understand why having exclusive apps for the iPhone that no other phone can do might be interesting, but if your laptop-killer can’t even run laptop-level apps (Photoshop?) , you’ve got a problem.

And no, it can’t handle Adobe Flash.
What’s the reasoning? Steve Jobs says it’s “buggy.”
Nice personal vendetta.
Again, I can understand why the iPod Touch might not be able to handle Flash, especially seeing that web-surfing is not its primary component.
On the other hand, the iPad is marketed as a device made for web-surfing. And yet it can’t fully access it.
Steve Jobs called the iPad “the best web experience you’ve ever had,” though why shell out $500+ to only access a tenth of web content?

There’s also no multitasking, or more specifically app concurrency.
This is not hyped to be a one-app device, and yet you cannot run two apps at the same time (despite the size and speed).

Regarding its e-book capabilities, and the fact that the iPad is not an e-Reader, we’ve already covered that part in full detail.
Though I do get annoyed when the iPad’s e-reading function is praised for details like:

When you turn a page, the animated page edge actually follows your finger’s position and speed as it curls, just like a paper page.

I’m sorry, I didn’t realize that an animation of a page turning was more important than the actual book page.
When you read a book, do you spend much time looking at how cool the page turning is, or more time reading the actual thing?

This ode to the iPad has even reached television, with Modern Family dedicating this week an episode to the device.
I don’t know what is scarier: the fact that an entire storyline was crafted around the iPad, or that Apple didn’t have to pay for it.

Time Magazine’s review does have an interesting point towards its very end:

The iPad shifts the emphasis from creating content to merely absorbing and manipulating it. It mutes you, turns you back into a passive consumer of other people’s masterpieces. In that sense, it’s a step backward.

The iPad is a media consumption device, but it’s too damn limited.

Which brings me to Final Draft.
You’ve probably heard by now that the company is developing an app for the iPad.
The Final Draft app will primarily be designed to make small edits here and there, but I get the feeling that, even with a great screenwriting app, the iPad isn’t comfy enough for script edits.
Typing pages of text on a virtual keyboard? You must be joking. You can’t even write on your lap.
Except for short e-mails or messages, not much will be able to be done it feels like.
I’m still waiting to see how this one plays out though.

I think Engadget‘s Ross Miller nailed it when he described the iPad as:

A jack of some trades, a master of none.

The press felt bummed out they didn’t call the iPod or the iPhone as the game-changer they were, so this time around they’re all too keen to declare the iPad as the greatest gadget that ever was.
I’m not saying the iPad will bomb (it probably won’t), I’m just expecting a little more neutrality from a medium that is supposed to be unbiased and shouldn’t get “all tingly inside” when reporting about a flawed device.

And as for why ABC and CBS putting their TV shows on the iPad for free is a dangerous thing, that’s a story for another time.

Why the hell do you have an iPhone?

HBO’s victory lap and a garbage can (Week Roundup)