The Future of eBook Readers

Today I went to the 2010 French Book Fair in Paris which usually has great debates dedicated to new problems relating to e-publishing and eBooks.
This year was no exception with an incredible array of talks on the future of publishing (one even about Augmented Reality).
I went to a few, though the one that caught my eye and found most interesting was the last:
E-Readers, where are we now?
The panel was comprised of Jacques Angelé (Nemoptic Vice-President), Pierre Geslot (Head of E-paper and Digitization projects at Orange), Alex Henzen (R&D Vice-President at iRex Technologies), and Anthony Slack (Commercial Development Vice-President at Liquavista).
As you’d expect, it was mainly about the future of e-Readers, and as a matter of fact, not only were we able to see with our very eyes amazing prototypes (pictures below), but a couple of announcements were made.
I will go over what was discussed in a minute, but first, let’s check up on some basics.

What is not an eBook E-Reader?
I’m sorry to break it to you, but first and foremost, the iPad, and all other tablets of its kind, are not e-Readers (more on that later).
Neither is your iPhone for that matter.
If they were, then your current computer, or even your TV, would be considered eBook Readers.
The truth is they do not contain the one key component to it all: e-paper.

What is e-paper?
As the name implies, it’s basically a display imitating to the fullest and ordinary piece of paper (with ink).
That also means it does not use backlight (unlike, say, LCD/LED screens). Given that, it doesn’t strain the eye.
E-papers actually act like a normal piece of paper, meaning they reflect ambient light.
In addition, once an e-page has been set, it remains static and can’t be changed, simply because it does not at this point need any electricity to sustain (it’s in stasis).
You could set your e-Reader on a specific book page and theoretically leave it like this for months (years?), and it wouldn’t switch off.
This of course sharply contrasts with any other battery-based devices that barely can stand a day without a charge.
The only time a Reader needs electricity is when it needs to change the screen (like when you turn the page), but even then, you’d have to do about two weeks of continuous change for the battery to drain.

It might shock you to learn that not all e-papers are using E Ink (yes, it’s a brand).
Different technologies are used, each with their advantages, and disadvantages.
In fact, although last year it controlled about 90% of all sold e-Readers, it is expected that, by the end of 2011, E Ink will only be carried on 50% of displays.
As for the actual technology involved, I won’t bore you with how this stuff works, as it has been detailed much better elsewhere. 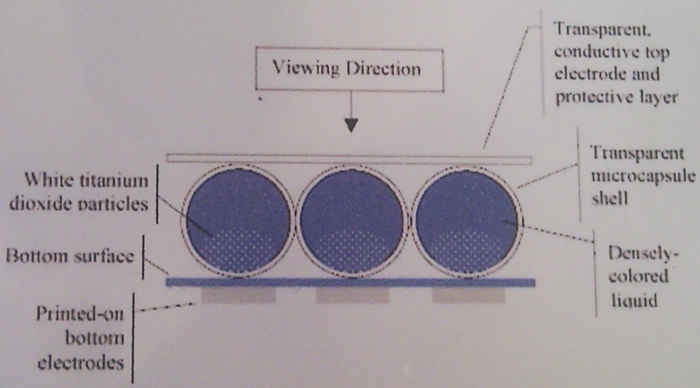 Suffice it to say that E Ink is part of a bigger group named Electrophoretic Display, or EPD. Such displays use charged pigment particles (pixels) that get rearranged based on an electric field: black or white.
The two main problems with E Ink are its response time, and its lack of color.
Ironically, E Ink was originally tested using other bi-colored pigments: 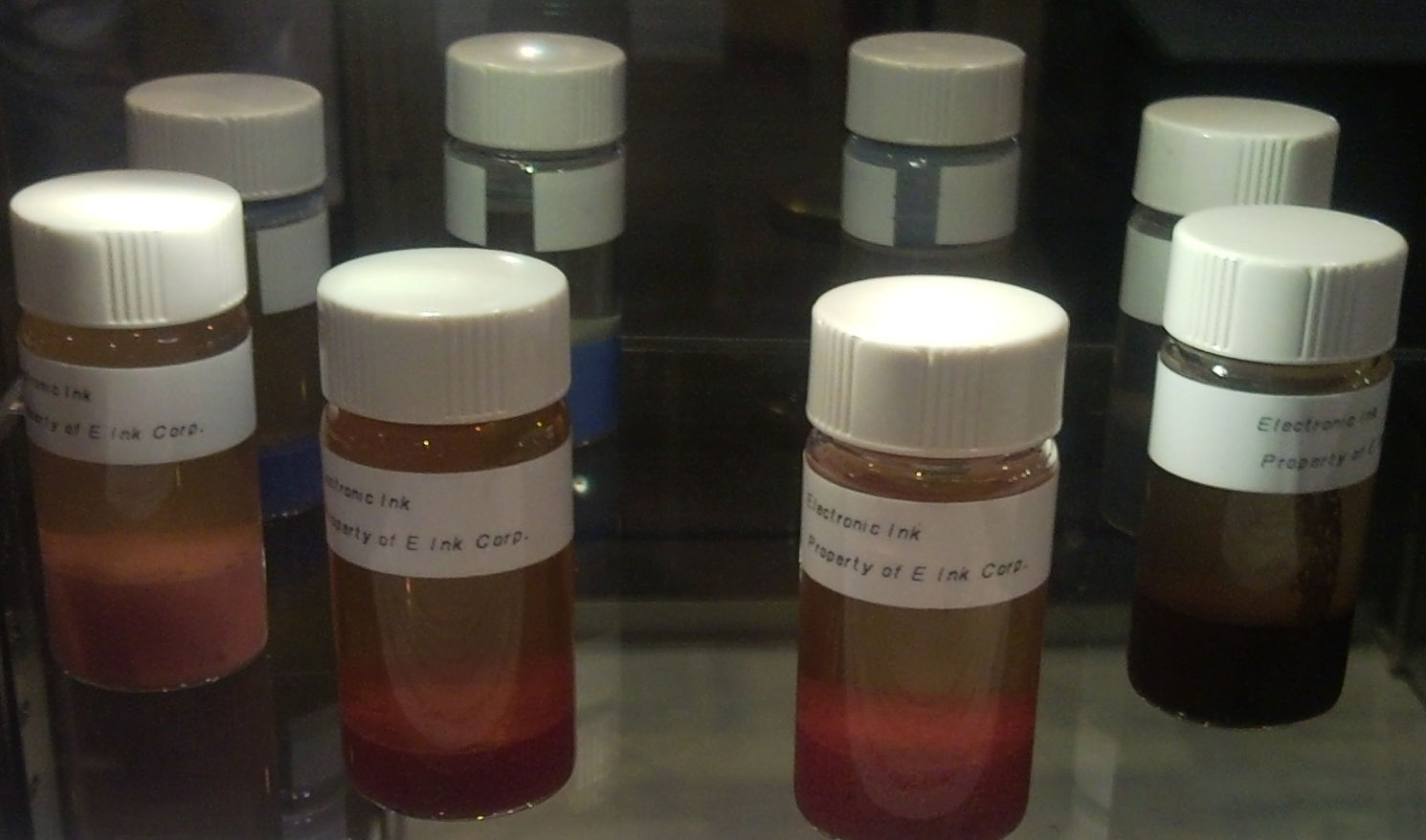 Constant R&D is able to increase each year the E Ink refresh rate by about 30%.
As for the color, that’s a different problem entirely.
iRex‘s Hanzen did however announce that colored E Ink would be arriving later this year (albeit at a different company).
For now, it’s not in their priority as colors on E Ink are simply not that efficient at the moment.
At best, you would get a sombre screen, since brightness would be limited. RGB additive color uses a third of the available pixel space, so you would only get a ninth of available brightness for “true white”.
Reflectivity would also be pretty limited.

Nemoptic presented prototypes of its BiNem (Bistable Nematic) Displays (manufacturing starts at around end of 2011): 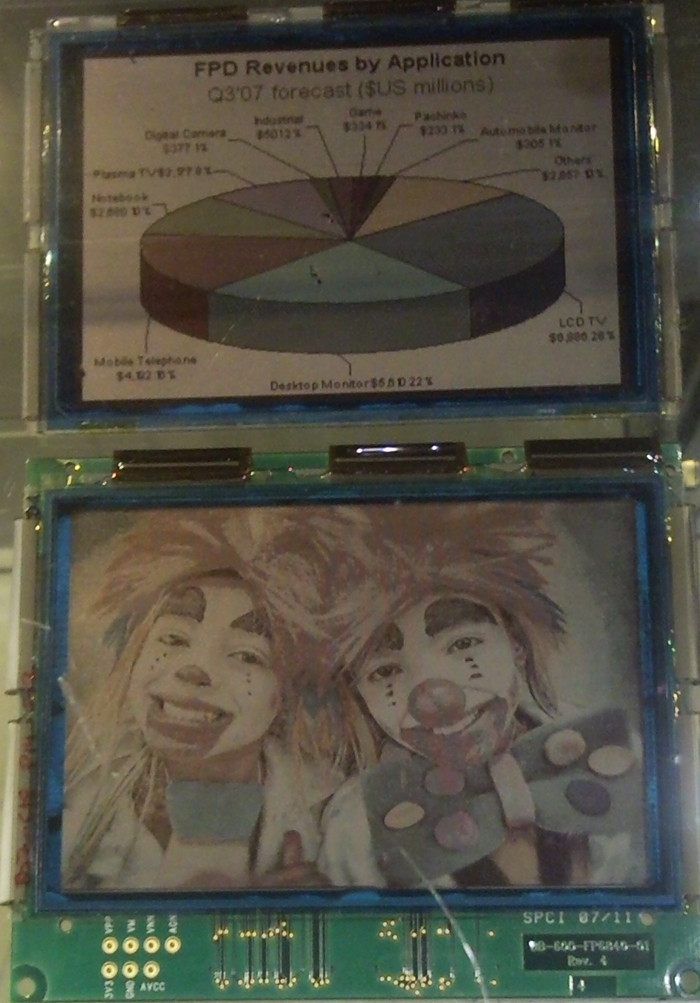 Perhaps the most promising new tech are what’s called Electrowetting Displays (EWD), represented at the panel by Liquavista.
Like E Ink, it works via electric fields. However, instead of pigment particles, it uses colored oil and water. The liquid therefore becomes wettable.
EWD has been described as “the most versatile,” with multiple use going from reflective applications to transmissive and transflective ones.
The tech can also go from low refresh rates (less than one frame per second) to super-high ones like 200 frames per second!

Liquavista presented three of these EWDs.
One was B&W: 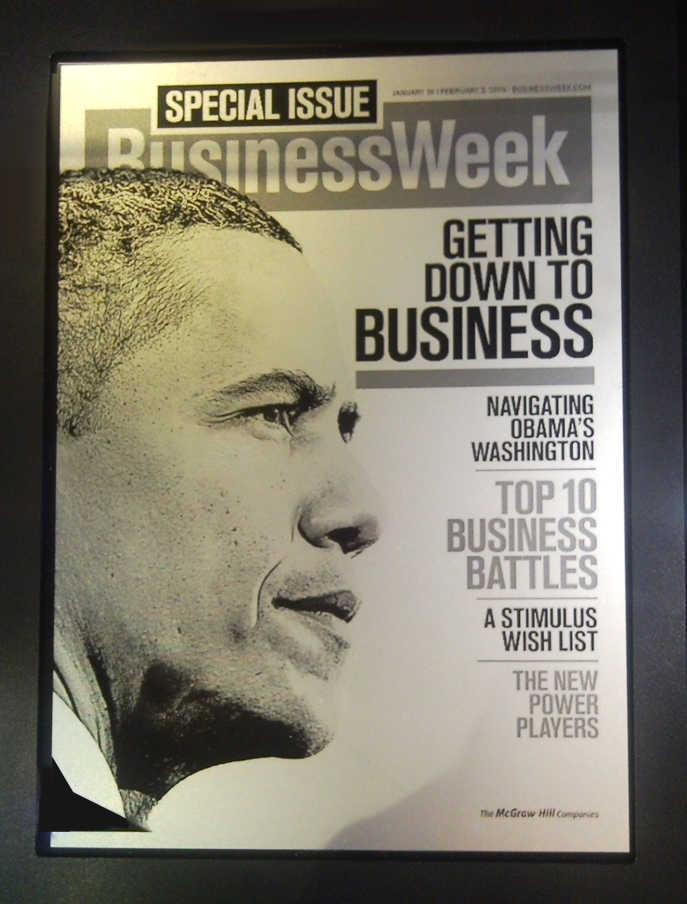 The other was color: 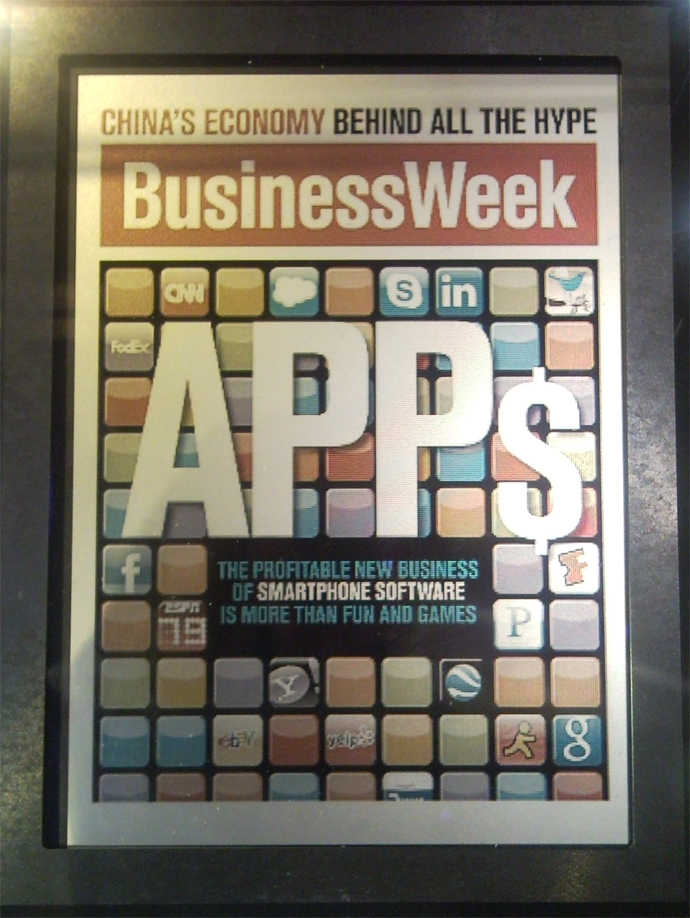 They were both announced as being released in Late May/Early June of this year (no price tag yet), and named Liquavista Pebble.

We also did get to see a prototype of a functioning touch-screen colored EWD, with such a high-refresh rate it could do video (let alone be able to handle an iPod Touch-type interface).
Although still a prototype, Liquavista‘s Anthony Slack did say the touchscreen could be compatible to both Projected Capacitive Touch (fingers) and Resistive Touch (stylus).
By June, the prototype should achieve at least a 24-bit color depth.
Later this year, manufacturing will be announced, with a release date slated around mid-2011.
The presentation on the touchscreen e-Reader was not unlike the one used here (right-side; the one on the left is Sony’s PRS-600BC).

When talking about the (currently) sole competitor in the color e-Reader market (Fujitsu‘s newly-released FLEPia), all the panel guests unanimously bashed the Reader, stating it was “too slow” and had “washed colors.”

The panel then shifted to the iPad, discussing if it was going to be a big e-Reader competitor.
This is when Orange‘s Geslot stepped in.
He talked a bit about several focus groups his company had recently made around the iPad.
The tablet had been pitted against major e-Readers (Kindle, Nook, etc.), not for a spec comparison, rather to see which one the various users (of all ages) would feel more comfortable reading books on.
He disclosed the results which were, as he puts it, “surprising.”
The focus groups revealed that two core opposing sides were emerging:
– Half the people loved the idea of a multimedia platform that could also let you read while still being connected (therefore preferring the iPad)
– The other half, in total opposition, considered that reading was sacred and a private journey that shouldn’t be interrupted by ringtones, pop-ups, or IMs (therefore preferring a dedicated e-Reader)
Geslot was keen to point out that the latter group actually wasn’t made up of only seniors but actually youngsters too.

At the end of it all, the panel agreed that there would probably be two kinds of usage that would call for two different devices.
A dedicated e-Reader, that has perfected its sole function, will be preferred for heavy-reading. Multimedia tablets (with or without e-paper), will offer more flexible use than their counterpart, but will only be used for quick reads here and there.

The moderator concluded by asking the guests what they thought an e-Reader will be like in ten years.
One jokingly replied: “I’m betting on a flexible 3-D e-paper display that can play Avatar.”
James Cameron would be so proud.

TV Books are back from the future (and the past)

The iPad: Where’s the objectivity?
Category Random
Leave a Reply