TV Books are back from the future (and the past)

Following on the steps of previous book posts, it seems that everyday I discover more and more books about screenwriting and especially, surprinsingly, TV writing.

On television writing I have found several other books that, according to the Amazon peeps’ reviews, seem worthwhile:

Marilyn Webber‘s Gardner’s Guide to Television Scriptwriting. Webber has written other writing books on other specific subjects (such as Sitcom writing, TV Animation, Feature Animation, etc). The book seems to be hands-on although not updated in its examples (West Wing, 24, and Gilmore Girls among others).

Martie Cook’s Write to TV: Out of Your Head and onto the Screen. Cook has dedicated writing sections for each of the areas of TV shows (Comedy, Prime-time Drama, TV-Movies, Reality TV and even TV News Magazines Shows and Kid Shows). The book also contains sections on writing characters, dialogs, pilots, as well as tons of pitch/business advices. An extended preview of the book can be found here. 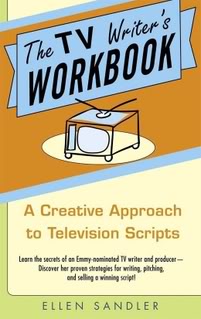 Ellen Sandler‘s The TV Writer’s Workbook. Sandler has written for shows such as Everybody Loves Raymond (where she was co-exec). Her TV writing book is therefore more focused on sitcom writing, although still touches on drama writing as well as networking. 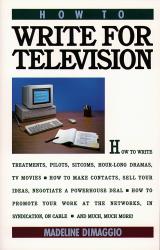 Also, just for giggles, I’ve found out that there’s a TV Writing book that came out way back in…1990. Notice the high-tech computer on the cover.
The accuracy of the information provided in this bok vis-à-vis contemporary television landscape cannot be guaranteed.

Last but not least, there’s a “how-to” television writing book with the brits in mind. That’s right, a book that covers everything you need to know if you want to write for the BBC. It was written by William Smethurst. And let’s not forget that the BBC is probably the only “serious” television option opened to anyone.

More and more TV Writing books seem to come out every year, which begs the question: Is television writing becoming popular and hype?

The Future's In
Category TV Writing