Realism is very important on Breaking Bad. To me, realism is important even if you’re making a super-hero movie. You get the one “buy”, the guy can fly or whatever. You want everything else to be believable.

Like any good television, Breaking Bad is about characters more than story. Realism on the show starts with the people it represents.
Continuing to quote Vince Gilligan on the subject:

First and foremost, you want human behavior to be believable. You want people to behave as human beings as we know and understand. Anyone out there, writer or not is an excellent judge of human behavior. You know when to call bullshit on behavior that seems “writerly” and seems made-up just in order to hit a certain plot point.

There’s a lot of plot in the show, but it’s primarily a study about these characters. A lot of the time spent in the writers’ room is talking about who these people are. What makes them tick. The best watercooler moments of the show are always the controversial decisions made by the characters. Why did they do that? 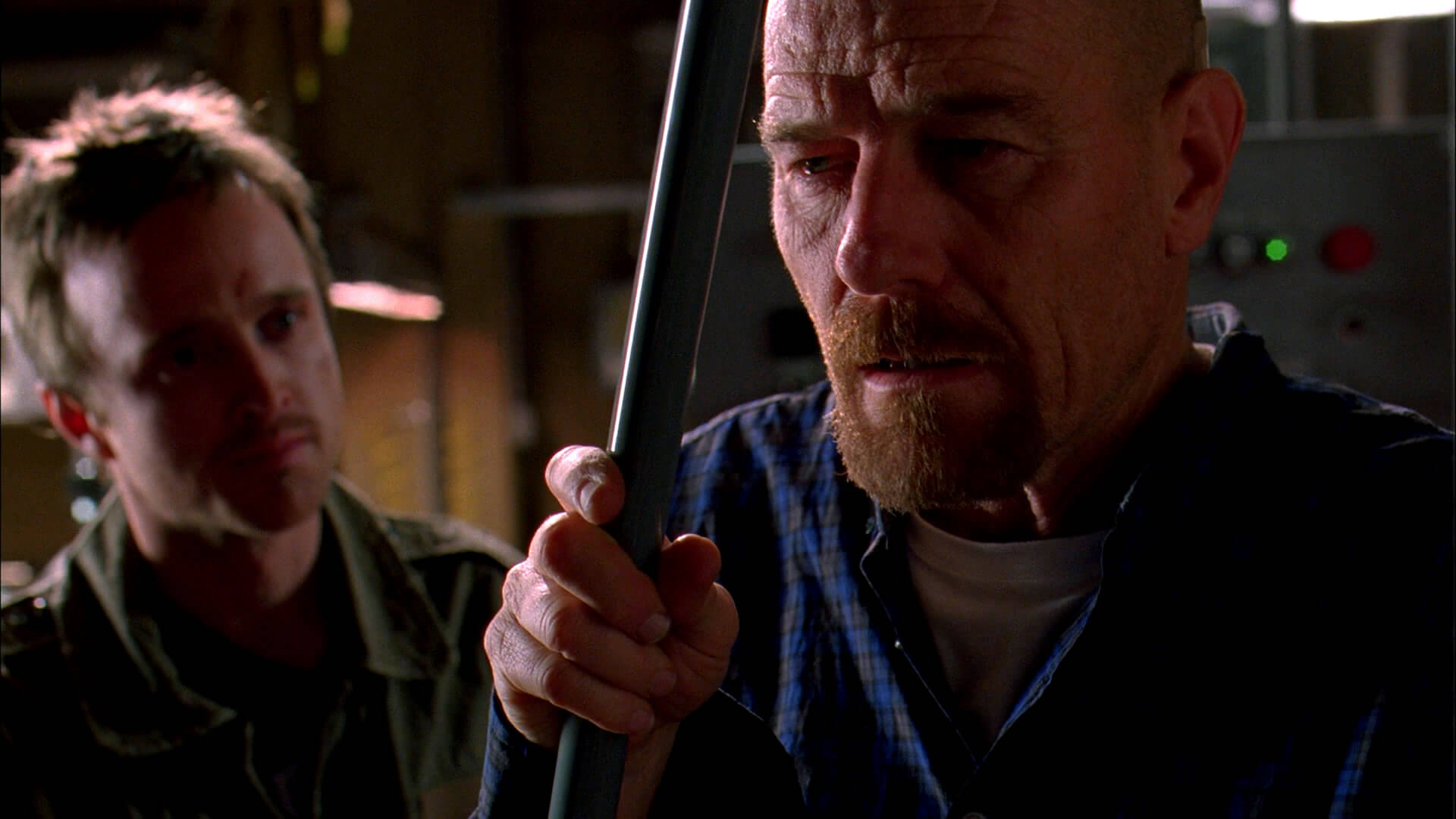 The show always finds great ways to explore their characters. Although we did not mention it in yesterday’s post, it could be said that the play-like episodes (or bottle shows) peppered across the series were experiments in their own right.
Going back to Vince Gilligan’s thoughts:

I feel as a showrunner that there should be a certain shape and pace to each season, and the really high highs that you try to get to at the end of a season — the big dramatic moments of action and violence, the big operatic moments you’re striving for — I don’t think would land as hard if you didn’t have the moments of quiet that came before them. The quiet episodes make the tenser, more dramatic episodes pop even more than they usually would just by their contrast.

Every year, Breaking Bad had one bottle episode, usually between Walt and Jesse. One of the most well-known is the infamous Fly episode (3×10), also known as “Waiting for Godot in a meth lab”. Walt is constipated emotionally, and you can talk ad nauseum about how the fly symbolizes his ongoing loss of control (through Gus Fring). The production reason for doing such an episode is, obviously, to save money. In fact, the show had pretty much run out of its yearly budget by that point. Regardless, this one-on-one was a great way to put out in the open the emotional toll previous events had on the two leads. There’s always new ways of deconstructing these people and their intentions. The series even went so far as to explore the likes of Skinny Pete, Badger, and even Wendy, which are tertiary characters.

In a typical cop show, the hero kills a bunch of bad guys, and then goes on with his life as if nothing happened. Hank dealt in the second season with accrued PTSD after his shoot-out with Tuco. A season later, he then had to go through physical therapy after getting shot. The character had a permanent walking problem, even up to his final episode. There is no reset button in the series, and no magic wand to speed things through, even if it’s something that will take multiple episode to go through (if not the remainder of the show). These are the sort of storylines that would get glossed over elsewhere, with a focus on the “dramatic moments”. The reality of Breaking Bad‘s world is the reality of its characters. What matters is what they go through. Drama begins and ends with them.

Breaking Bad has had one of the best crew on TV thanks to their commitment to the finished product. “Best idea wins” is now a common trope in writers room (rightfully so), but this show is perhaps the current epitome of the phrase.

One of the things Gilligan took away from his experience on X-Files was one of Chris Carter’s rules: have a visual point-of-view.
What is the image you’ll retain from the scene? From the episode? 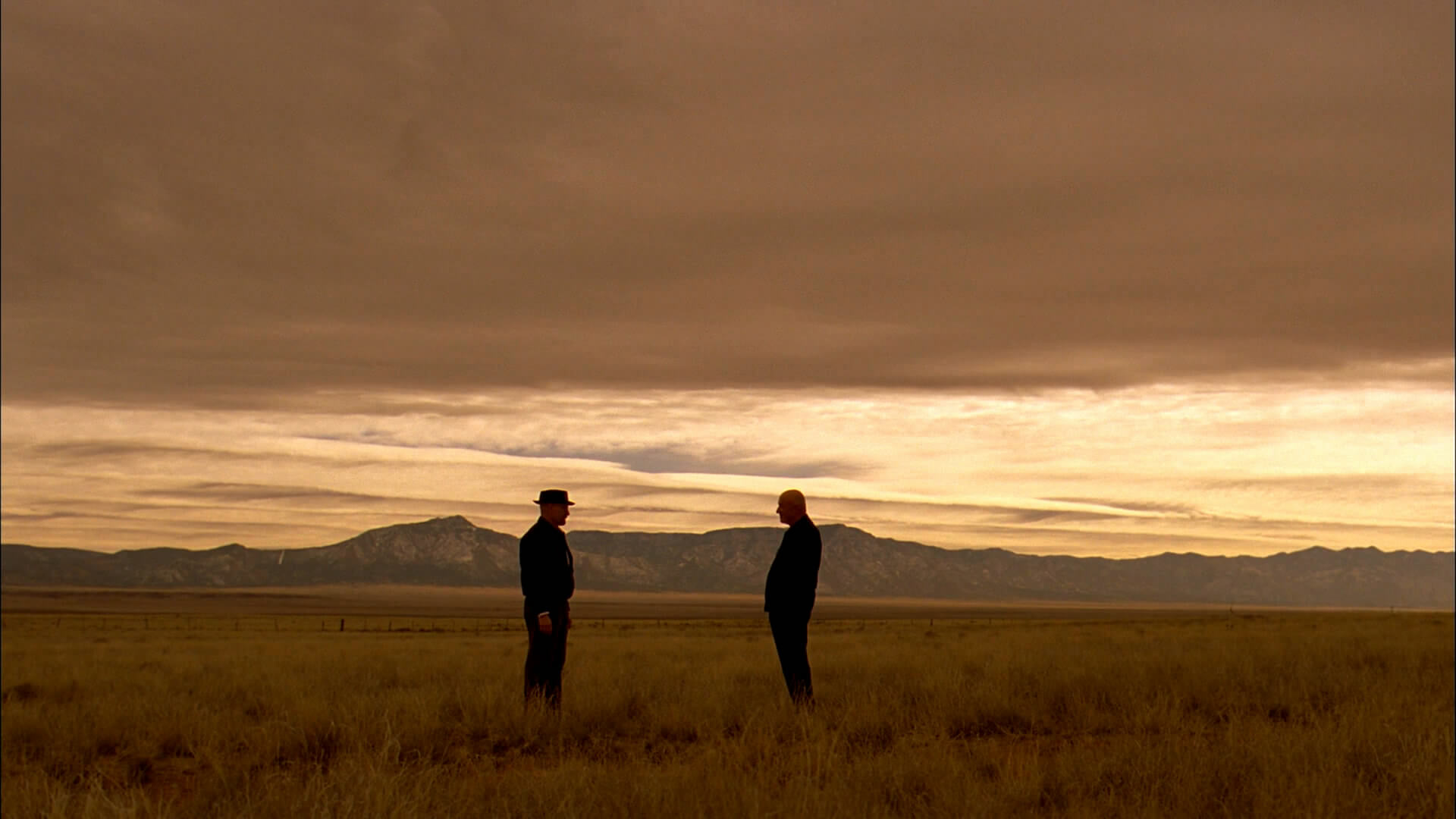 Perhaps also because of his feature screenwriting background, Vince Gilligan completely embraced this idea on Bad. The show is clearly thought-out on a writing and acting level, but also through its directing and visuals. The many directors on the show, from Michelle MacLaren to Ryan Johnson, and cinematographers (namely Michael Slovis), have done an extraordinary job at embracing that ideal.
Color palette, long shots, wide angles, silent scenes, fast-paced montages, stylized shots. There is quite a long list of visual elements that are now associated with Breaking Bad. The point behind is always to try and convey the stylistic reality of the environment. As Vince himself explained, whether you’re working with TV or movies, it’s all the same: motion pictures. You need to realistically tell the story on a visual level.

The devil and details

Breaking Bad is TV subtlety at its finest. It underplays its big reveals. One of the best examples of this is in season four, where several moments surreptitiously hinted at Walt being the one who poisoned Brock (before the actual revelation in the last seconds of the finale). Like any good mystery, even prior to the last scene, there were ways of figuring it all out. You can even check out this thread by a redditor that uncovered the clues prior to the season’s finale. Sometimes moments become self-evident only after the facts, like in life. Hindsight. 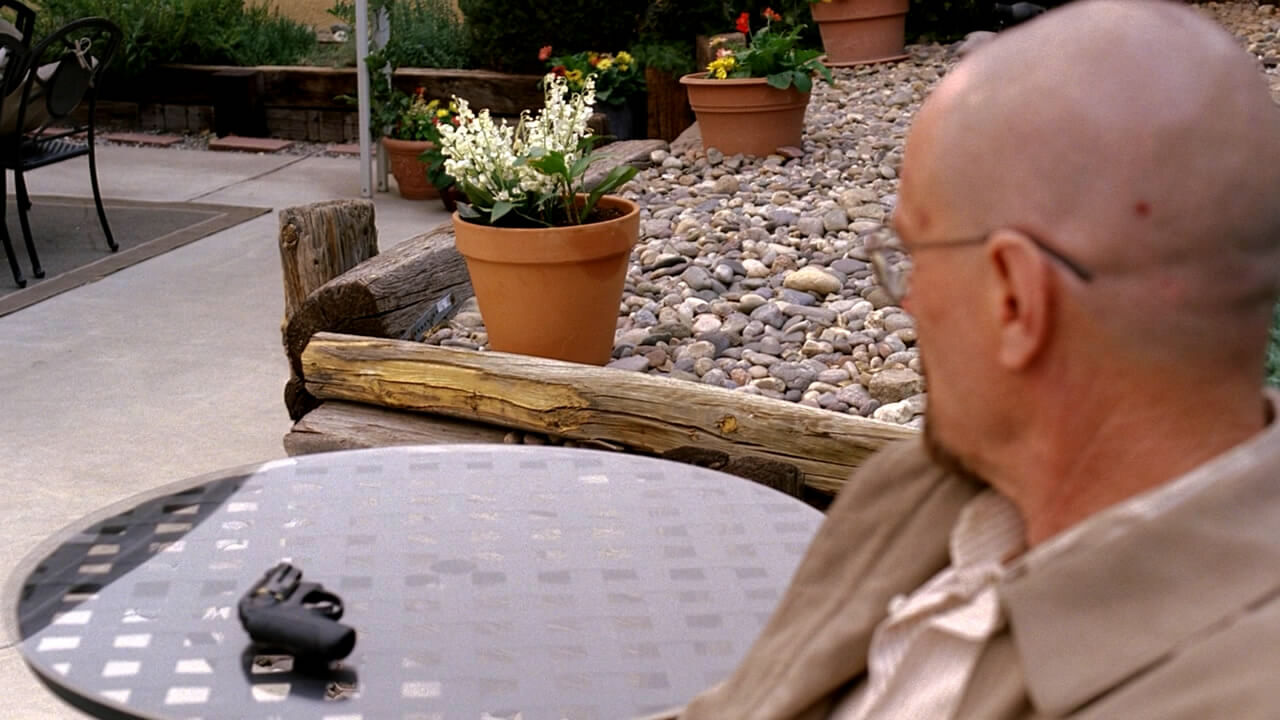 One of the show’s greatest strengths is its capacity to rarely (if ever) have loose ends. Of course, the writers sit around and talk about the details of each episodes. Not only on a visual level, and characters, but (evidently) with the story itself. As the sprawling plots developed, so did the time spent breaking each episode. In the second season, the writers took about ten to twelve days to break an episode. By the final season, it came down to about a month each. The more dangling threads you have to resolve, the more time you spend going deeper.
Ted was brought back into the fold in season four, after apparently disappearing with money issues two years prior. Not only was his plotline resolved in that season (through Skylar almost bailing him out), but more importantly it tied directly to Walt’s ultimate demise (in “Crawl Space”). Just because something seems in the background at first doesn’t mean it isn’t relevant. Breaking Bad is great at connecting these dots in an intrinsic way.

Breathing in the world

You cannot talk about Bad‘s realism without at least mentioning its portrayal of chemistry and the drug trade. Quite a few articles have been written on the subject, so I won’t really delve much into what is real vs. made-up. Rather, I wanted to briefly talk about the heightened sense of reality of its world.
Breaking Bad is a slow burn. It takes its time to flesh out its characters, but also the stories it presents (while twisting expectations). Even from a popularity standpoint, it took pretty much half the series’ lifespan to garner its current cult status. 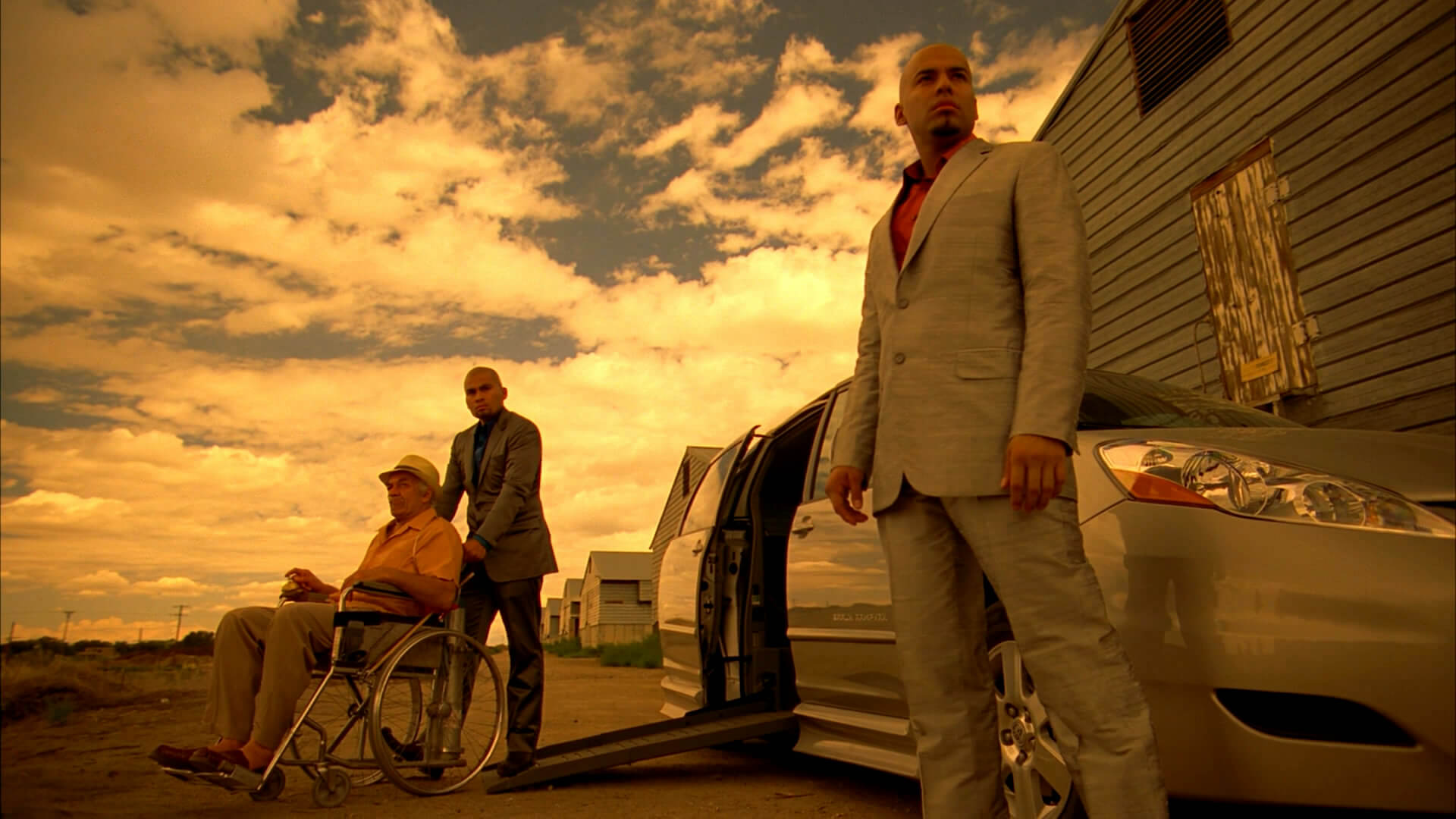 The show was hyper-serialized, and given its time-frame (one year within the story), it couldn’t afford being “ripped from headlines” topical. Nonetheless, it was still relevant. We’ve already seen how the series embraced its everyday roots by showing the “moments between the moments”. And the show proved to be even more receptive to its cartel storylines. Most notably, in the second season, the now-iconic image of a drug informant getting beheaded (and later put on a tortoise). “Extreme” moments that are, actually, completely believable (and similarly happened later in real life). Another great example of an atypical sequence is Los Cuates de Sinaloa’s narcocorrido track inspired by Heisenberg in 2×07 (“Negro Y Azul”). Narcocorridos are traditional Mexican songs with lyrics usually inspired by illegal criminal activities, often cartel-related. Although not a music genre well-known in the States, it nonetheless cements his story within the “real world”.

We all remember the long, silent scenes, often punctuated by Dave Porter’s music. People might see these scenes as out there, but here’s a clear “flavor” to the series, and the way it portrays its hyper-real world, which in turn reflects its characters. Breaking Bad is believable not only because of its characters, but because of its realistic context. The people are put in dramatic and heightened situations that feel real because, on some level, they are real.