If you had to name one thing to describe the show, it would be its main character. A good guy that “breaks bad”. Mr. Chips gone Scarface.
The show has embraced its premise, and went probably beyond anyone’s “hopes and dreams”. And it’s all thanks to one thing: it makes sense. Walt’s transformation into Heisenberg is, on some level, understandable. His ego was, bit by bit, eating him away, as he was going down an inescapable rabbit hole. We were with him as he was slowly losing his humanity. 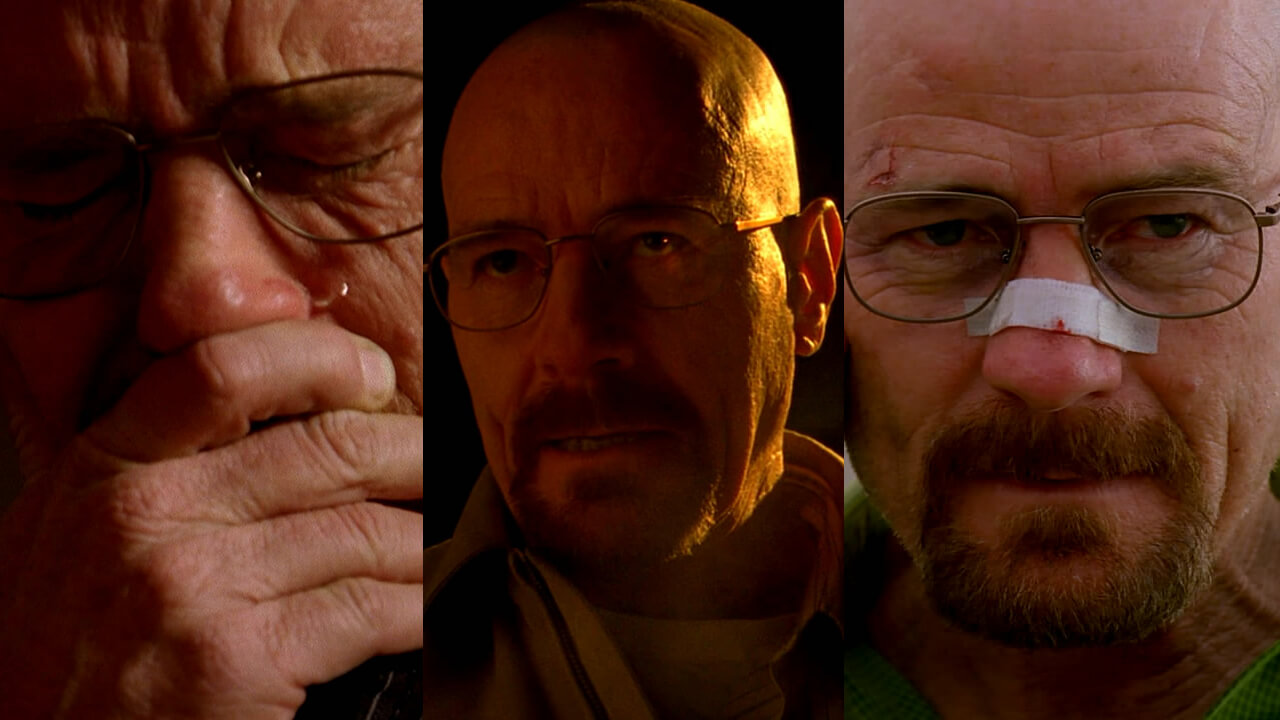 In my mind, the irrevocable turning point was when he watches Jane die at the end of 2×12 (“Phoenix”). Standing by, as an innocent woman chokes to death, he reacts very emotionally to that moment (albeit with no one to notice). A season later (3×12 – “Half Measures”), he directly kills two “bad” people with his car (and gun). Adrenaline is pumping through his veins. He dryly tells Jesse: “run”. Down the line, a further season after (4×13 – “Face Off”), it is revealed he is the cause of the (near-)demise of an innocent child (Brock). By that point, he is completely removed from the act itself, oblivious to the pain he has caused. All that matters is that he has won.
From witness to perpetrator, Walter White has been replaced by Heisenberg.

This fall from grace can directly be tied back to his ego, and specifically a moment in the first season where he refuses to take up on an offer from his (ex-)friend Elliot Schwartz.
To quote Vince Gilligan himself on the matter:

One of our finest moments was not necessarily one of our most dramatic. But in the writers’ room during the first season, we did an episode – only our fifth episode – where we offered a Deus Ex Machina moment to Walter White. We basically had a savior, a white knight, come to Walter White in the form of Elliott Schwartz, his former friend and lab partner who is now a millionaire, running an enormous scientific research company.
And Elliott comes to Walt and says, ‘I’ve heard about your cancer, I’m going to pay for your medical treatment, I’m going to pay the full freight on it, and I’m going to give you a job, anything you want – I just want to do right by you and help you and help your family…’ And instead of taking this life preserver that’s been thrown to him, Walt decides to go back to cooking crystal meth, and that’s one of my favorite moments and one of the most important moments in the life of the show, because prior to that I don’t think the writers and I truly understood Walter White.
We didn’t understand that he was a creature of such pride and such damaged ego that he would rather be his own man and endanger his family’s life than take a handout like that. He’s that kind of a guy. Prior to that Walter White was basically a good but mislead guy with bad decision-making skills. He was going to make money, and then what was going to happen to keep him cooking meth? The money was going to get stolen, so he’d have to cook more meth… we came to realize truly what we had in that fifth episode.

As Vince explained, the gamble of Breaking Bad was to create an antagonist out of a protagonist. He expected viewership to drastically dip as the series continued. The exact opposite happened.
To this day, a lot of people still root for Walter White, even during his darkest moments. The character isn’t necessarily likeable, but he is justifiable. This is a guy who deludes himself about what he does, and why he does what he thinks he does. The morality and goodness of Walter White/Heisenberg is beyond ambiguous at this point. Yet, every person has a different opinion on the matter. Is he a good man? Is he a good provider? This is about justifying the unjustifiable.
You could write many essays on what drives Walt to do the things he do. You could even track his mental state in every scene, and see his evolution into an anti-hero. What made the show such a tour de force, and Walt such an amazing character, was that neither were unilaterally hopeless. Rather, they offered a view of one man falling prey to his own pride.

The perspective of Breaking Bad was not one of story, or even action, it was one of motivation. Why are these people doing the things they’re doing?

Breaking Bad takes what you expect, and then confronts it. A recent example of this is the climactic encounter between Hank and Walt at the end of 5×09 (“Blood Money”). A few people were surprised at how “soon” it happened, however the series was never about one man chasing after the other. In fact, if it were not for Dean Norris’ performance, Hank would have probably had more of a background role.
Going back to the scene in question, the “twist” on the expected isn’t how soon it happened, rather what happened in it. The two men are superficially talking about Hank’s well-being as he stays home. Walt has come all the way over there to (unofficially) check how far he is into the Heisenberg investigation he is. A lot of things are left unsaid. Until…the moment where Walt steps back into the garage. And Hank closes the garage door behind him.
Any other show would cut to black at this point. Not Breaking Bad. The show pushes the scene ever further, and goes all-out with this confrontation, mano-a-mano. The cat is let out of the bag. Five seasons of drama finally let loose. Everyone is aware of what they’re working with, so there’s no reason to play coy with the drama. 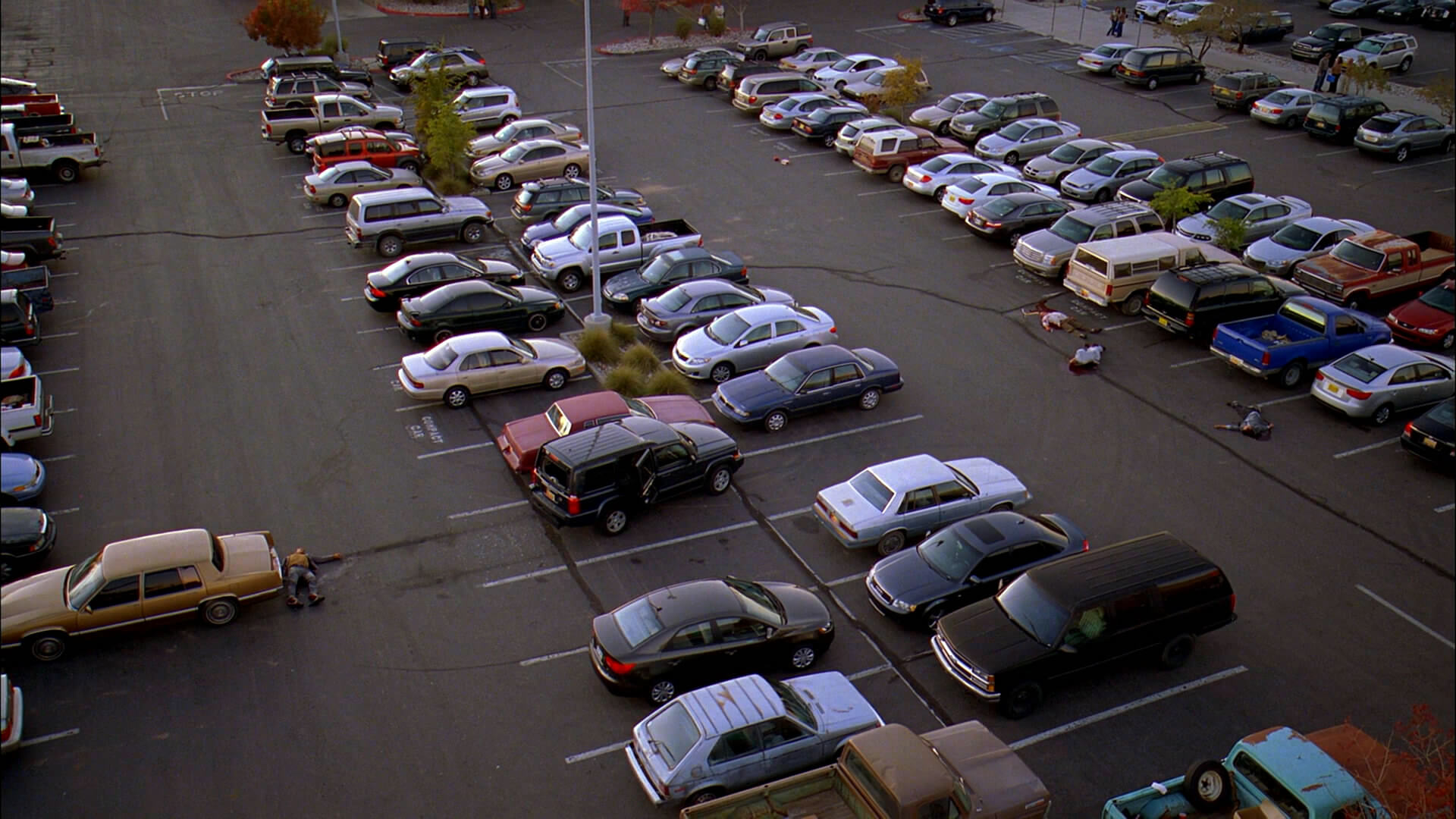 Two season earlier, Tucco’s cousins arrive in town to kill Heisenberg. Expectations were high for them: they were being framed as season three’s main bad guys (or at least characters surviving more than a few episodes). By the second episode, they’re already at Walt’s home and are on the verge of killing him. By the seventh episode (mid-season), a shoot-out happens between the cousins and Hank, effectively ending their existence. In most shows, this would have been a finale, or penultimate episode, with their arc lasting an entire season. Not Breaking Bad. The show knows when to pull the trigger, both literally and figuratively, on its storylines.

After 4×11 (“Crawl Space”) aired, I tweeted: “TV hasn’t felt this intense in…ever?” Piece by piece, throughout the year, the series had slowly build up to the insurmountable wall now facing Walt. It seemed like Skylar’s plot of giving money away to Ted was irrelevant to the larger story, it was in fact a key part of it. Same goes of Saul’s disappearer.
The show has never ended a season on a bona fide cliffhanger (Hank pooping was mid-season). Admittedly, you wanted to know what happened to the characters (especially after the third season), but most threads were usually closed by season’s end. What maintained people’s desire to come back was the universe itself, not answers to key mysteries. Each season became progressively intense because of its own internal dynamic, not because of a compound effect where the preceding year’s dangling threads were being paid off. The only exception being the final season (specifically its second half) and the beginning of season four (following the murder of Gale Boetticher).

Breaking Bad went against the grain by declaring it was okay to disregard the conventional rules of the genre. What matters most are the characters.

The moments between the moments

Breaking Bad started out on a much lower scale than it now is at. Although the series is going back full-circle to its roots, it merely started out around a high-school teacher and his family. Then came Tucco, the cousins, the cartel, Gus, the DEA, and neo-nazis. Heisenberg’s empire evolved, it expanded, and so did the show. 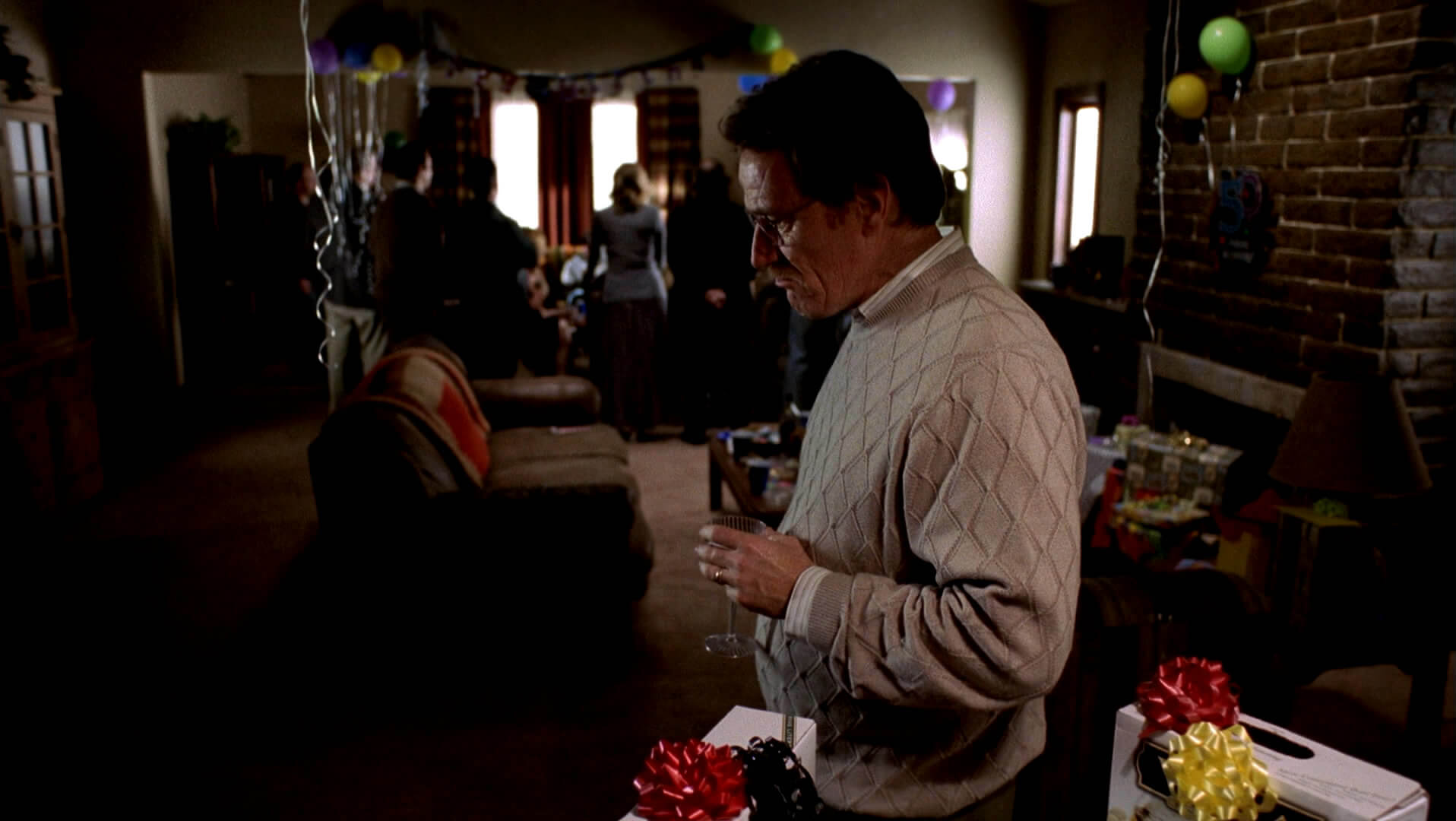 Beyond the thriller, Breaking Bad was about the “moments between moments”. Most shows focus on the big moments where “stuff happens”, and everything in between is filler. But this series was never about dramatic shoot-outs, or even box-cutter throat-slicing. It all started with small moments, daily life. Birthdays, breakfasts, school assemblies, awkward parties hosted by “old friends”, house-hunting, PTA meetings. You may remember the action sequences in retrospect, but before that you need the calm before the storm. Bad was constantly reasserting itself around what mattered: smaller scenes, not epic set-pieces.

The show took the time to breathe and embrace the real world around it, and feed the humanity of its characters. Consequences and repercussions mattered because of the time spent at building these relationships, this status quo being broken apart. Like a steady hand on the wheel, it knew where it was heading towards. It was spending its time on meaningful moments. Bad was about real emotions, real greed, real jealousy, real fear. All of it stemming from smaller scales. The series was not trying to milk these moments, it was trying to establish context. Even in the craziness of season five, you still had family moments and humorous moments, like Skinny Pete and Badger’s Star Trek conversation.

Breaking Bad‘s ultimate experiment, beyond its characters, was to question the middle ground between consequence and justification.
This was a show about lives and decisions.

If you don’t listen to the Breaking Bad Insider Podcast, you’re a bad writer