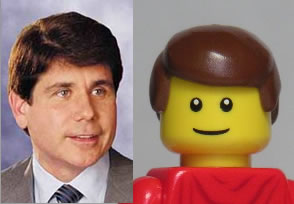 Former Illinois Governor Rod “Lego Man” Blagojevich has made a deal to star in NBC’s I’m a Celebrity, Get me Out of Here, the American adaptation of the famous UK reality show.

I admit I laughed out loud a bit at the announcement.
And even more when an NBC spokesman soon after declared:

Rod Blagojevich will be a participant on the show pending the court’s approval.

On a whole other subject, most of the Stargate SG-1 cast will unite once again and join the spin-off Stargate Universe.
Richard Dean Anderson, Amanda Tapping, Michael Shanks, and Gary Jones, will reprise their roles in guest stints.
Janelle Monáe will also guest as herself to play a couple of songs from her latest album.

I find interesting that so many cast members from the original show are jumping on the new ship, especially given the fact that this spin-off is supposed to be almost completely detached from its two predecessors with almost no real tie-in to the current Stargate mythology (except of course being the show’s launching pad).
Add that to the fact that the premise is based on them stuck on a spaceship and not being able to return to Earth, and you’ve got yourself some strange cameos throughout the show’s history.

And finally, a bit of 3-D news.
AMG TV is to become the first 3-D dedicated network in America.
For about $50, you’ll be able to turn any HDTV into a 3-D TV, including the cost of glasses, with the help of an add-on box for cable and satellite subscribers.

The deal links AMG to Signet International Holdings and to Kerner Broadcast Corp., a spin-off company from non other than the famous Industrial Light and Magic.
Kerner will basically supplying the programming, creating new 3-D content as well as upgrading and converting already-existing 2-D content.

Although the quality is not yet on par with actual High Definition (5 out of 10 in terms of quality says the CEO of Kerner Broadcasting), the technology is affordable enough to get it to the masses.

Surely a very interesting year to come for television.