Let’s start with 2 strange pick-ups from the last couple of days.

HBO has ordered a series adaptation (as in real series, not mini) of George R.R. Martin’s 7-book “A Song of Fire & Ice”, titled “Game of Thrones”.
Each season would represent a book, so it could go on for about 7 seasons, if it is picked up that is.
Did I forget to mention that “Game of Thrones” is in fact a fantasy series?
As in, magic and dragons.
On HBO.
In primetime.

Ridley Scott on the other hand is going to direct a movie adaptation of…wait for it…Monopoly.
The script is going to be penned by Corpse Bride/Monster House‘s Pamela Pettler and should be reminiscent of Blade Runner with its futuristic feel.

Meanwhile, Fox just ditched MadTV and NBC has canceled My Worst Enemy and Lipstick Jungle.
But no real surprise there.

Did you guys also hear?
The war in Iraq has ended, says the New York Times. 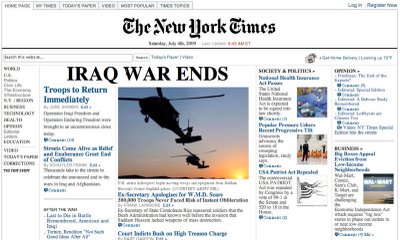 And just because I’m a sucker for technology, and “the future is now”:
RED just announced today its massive new line of product and accessories, including the awesome $55,000 EPIC 617 Mysterium Monstro camera.
Just how awesome is it?
28k awesome.
That means it shoots at 25FPS images with a res of 28 000 x 9 334.
With the ability to also shoot 3-D.
Yeah, you read that correctly.

Sure, it’s only going to arrive in like 2 years, but who cares.
It’s revolutionary.

In and Out
Category Entertainment Talk