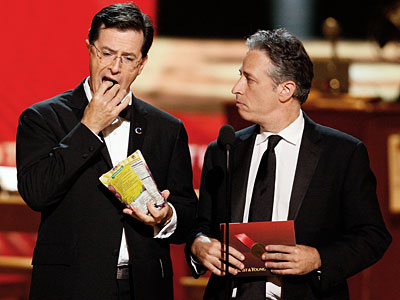 Probably the best line of the night next to Piven’s diss of the opening.

I like Survivor but man did that Emmy hosting suck.
Even Probst was bad, and he was the one to win the Emmy.

I would love to be in the office of the Emmy guy on the day he decided who was going to host the 60th Primetime Emmy Awards.

Maybe they wanted to avoid waves and anything politically incorrect.

I guess that’s why thoses bastards decided to cut Kirk Ellis when he was talking about the Founding Fathers! 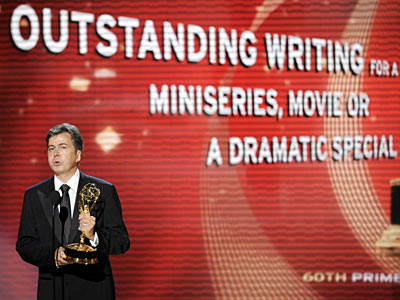 Yeah, let’s show some respect to the writers who make the medium what it is by minimizing to the extreme their speeches (Ellis was told to “wrap it up” just as was getting on stage!).

I also find ironic that for a show that celebrates TV and coming on the heels of a writers’ strike, they chose five reality hosts for the Emmys.
Nice touch.

Regarding the actual results, I’m really happy for Brian Cranston and Breaking Bad, great show, great actor.
Happy also for Ivaneck, the guy deserves to finally win!
I like a lot Mad Men but I still feel as though it is over-hyped, especially considering the other shows nominated (except Boston Legal).
And Tina Fey still rocks.

And how weird was that Forrest Gump/Punchline reunion?