First off, I can’t believe this is already my fourth Emmy review on this site.
I’d like to thank — Oh, who am I kidding. I made myself.

Anyways, on to business. 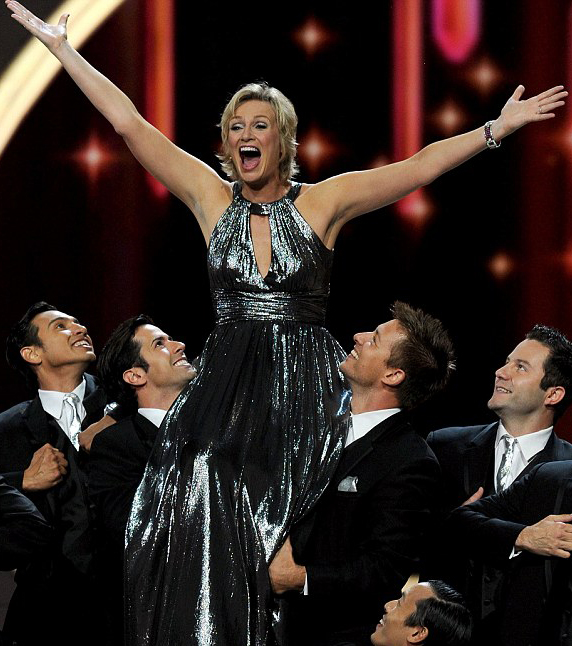 I’ve gotta admit, this was a pretty good year for the Emmys.
Jane Lynch was a great host, and it started off fairly well with her opening number.
It did drag on a bit but, overall, it was a nice time (I’m still a fan of last year’s Born To Run though).
One thing I did note about the stage was the huge FOX logo at the top of the gigantic video tower.
We get it, we’re on FOX. The Simon Cowell network.

The big awkward running gag of the night (you’ve gotta have one of those) was the Emmytones. Or, as I call it, the “why the fuck am I doing this” choir, composed of such talented actors as Joel McHale and Zach Levi.
Forced smiles coupled with bad timing meant one bad musical number after another.
LL Cool J’s surprise guest song towards the end of the night only reinforced the contrast between a “cool” number and…that.

As expected, we were treated with funny presenters mixed with more, shall we say, somber ones.
It started pretty well with the two Jimmys (Fallon and Kimmel) boxing it out.
The first part of the night was, as Jane Lynch called it, the Modern Family Awards.
Beyond the fact that it was a clean sweep for the show, I actually did not expect Julie Bowen and Ty Burrell to win. They did deserve the awards though.
Ricky Gervais’ pre-recorded message was way too tame to be funny. I know it was supposed to be the joke but, still, too on the nose. Here’s to hoping he’ll be back in some capacity live on another award show.
Another annoying thing about the night was the overbearing announcer/voice-over guy making pretty crappy jokes about each winner as they walked onto the stage. They definitely need to cut that gag out next time around.

I honestly thought there would be an upset in the comedy writing department with Louis C.K. winning. After all, the show is widely loved in LaLaLand.
And if not a Louie episode, then at least the final Steve Carell/The Office one.
So, yes, this was another Modern Family Emmy I didn’t really anticipate.
Same comment for ‘best actor’ where I really thought Steve Carell’s final year would be recognized.
Charlie Sheen’s speech was beyond awkward. Was he being serious or ironic? It all sounded so hollow and strange. I can understand Jim Parsons being creeped out.

At this point in the post I have to take a moment and acknowledge the great dramatic presentation that was the Outstanding Lead Actress in a Comedy Series category.
All the nominated actresses going up on stage ‘impromptu’-style was great.
Yay for McCarthy. I’m not a big Mike & Molly fan though I’m seeing this victory as a recognition of McCarthy’s past work (Gilmore Girls!). And Bridesmaids certainly didn’t hurt. 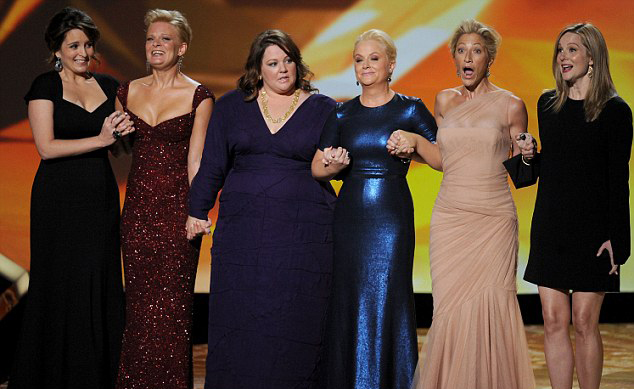 The best moment of the night was undoubtedly the great Office comedy bit with fellow characters/actors popping in and out of the short. The biggest laughs were had with Jesse Pinkman giving Creed some meth. Brilliant. 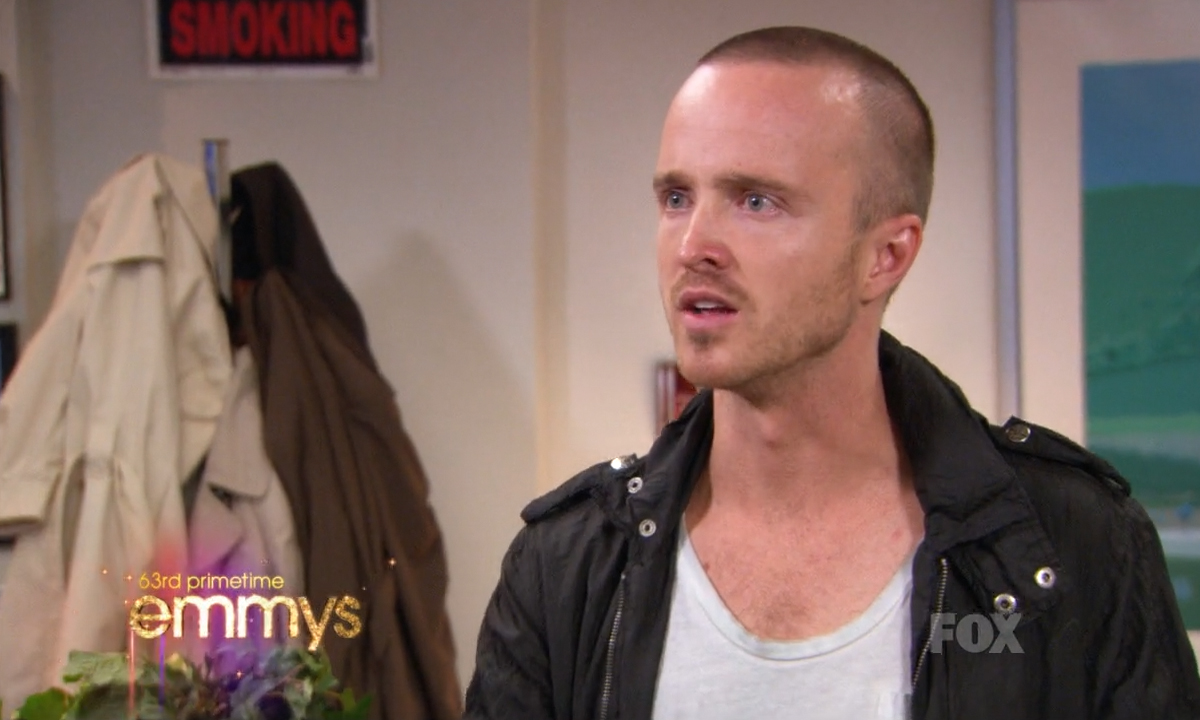 I also cannot help but be amused by Cee-Lo’s chair malfunction.

Moving on the the Reality/Variety category, I have to say that Top Chef: All-Stars was a shoe-in for the Emmy, not Amazing Race (for what feels like a decade of wins).
Speaking of gazillion victories, The Daily Show once again took the top prize. I can’t complain, although I’m still waiting on The Colbert Report to get the Emmy.

We then got blasted with a Lonely Island medley (sorta).
Look, I enjoy the occasional skit as much as the next guy, but doing a live remake of the Michael Bolton song was unoriginal to say the least.
It was a nice touch to have (I think) Ed Helms, Maya Rudolph and John Stamos in the set as well, but overall, a fairly weak (albeit crazy) skit.

And this brings me to the ‘best drama writer’ category.
Holy smokes.
Huge surprise (in my mind) with Jason Katims’ oh-so-deserved victory for the series finale of Friday Night Lights.
Finally some recognition!
Now, I’m still a season behind, but I’m super stoked about this win.
Ditto for Kyle Chandler’s Emmy prize.
Those are upsets I enjoy seeing.
Martin Scorsese winning best director was one of the most obvious awards of the night (save for the finale two).
On the other side of the coin, Peter Dinklage won! 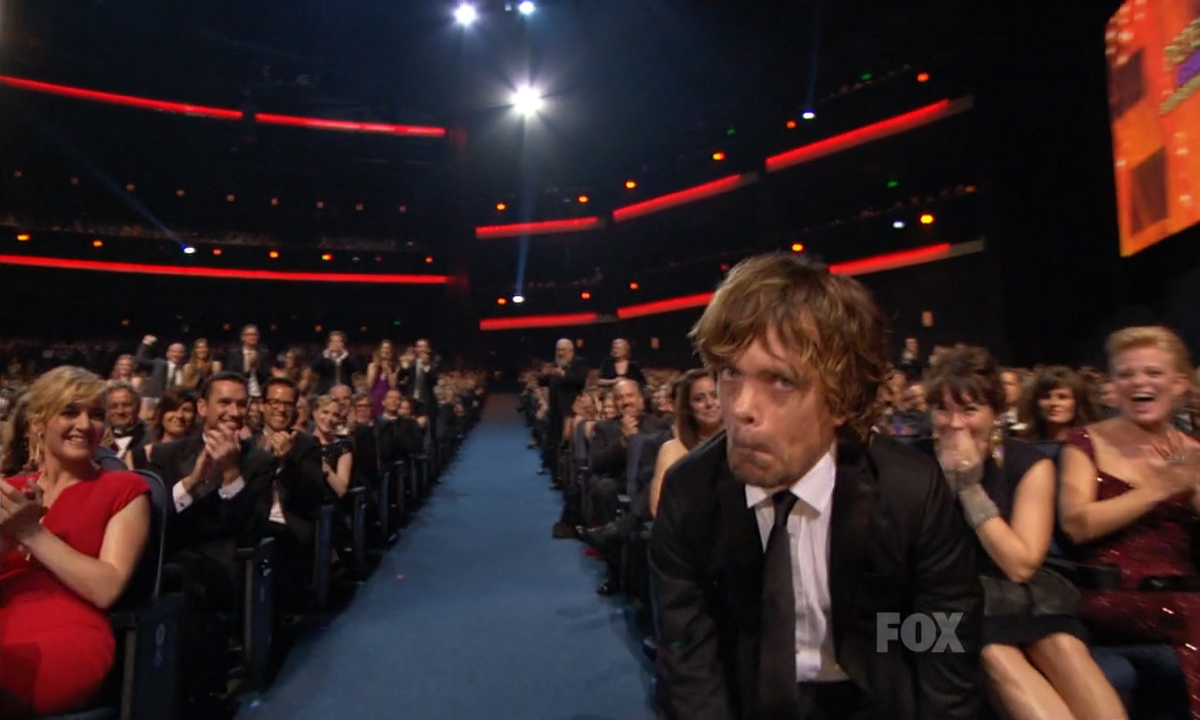 It might not have seemed like the role of a lifetime but it sure feels like it now.
Game of Thrones is currently the number one talked-about show in every writers room so it might not be as surprising as it seems.

Following last year’s debacle, the ‘In Memoriam’ segment was anticipated (for lack of a more politically-correct description).
What we got this time around was a music clip promoting a Canadian boys band singing a terrible version of Hallelujah.
Better luck next season, right?

And now about the final awards.
Clearly no surprise there for Downtown Abbey which holds the BS record for “most acclaimed series in the world“.
I haven’t got much else to add about Mad Men‘s victory.
And as for Modern Family winning. Well. It’s the new 30 Rock.