Everyone was predicting the ugly rise of monolithic Emmy sweeps due to the award’s change in voting process. 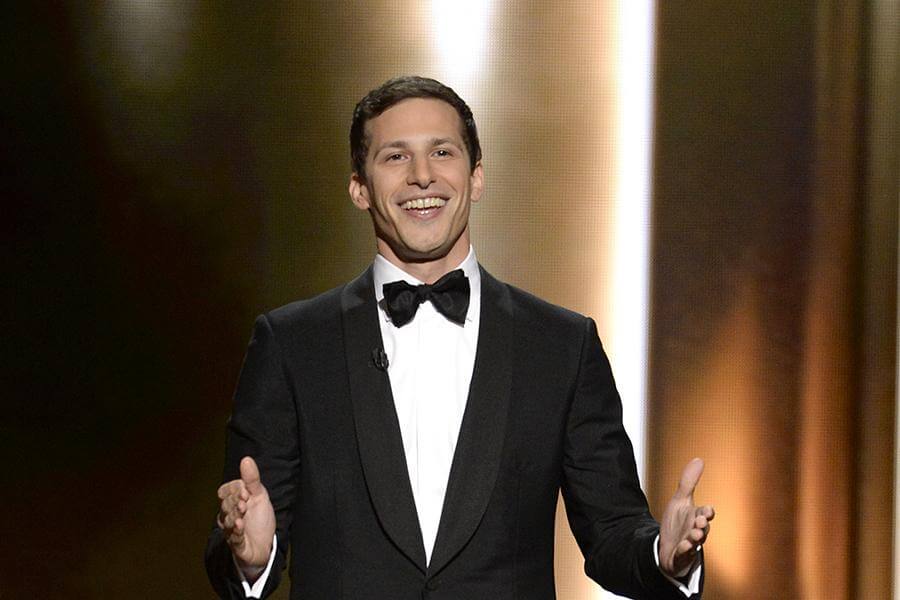 If you’re unaware of the Emmy voting change I’m referring to, it all boils down to a major shift in who decides the award winners.

Basically, the process went went from a small “blue-ribbon panel” of voters that could be supervised into watching the nominees’ screeners (and have some basic knowledge of said nominees), to everyone of the 19,000+ ATAS members being able to vote in their categories.
(You can read more about these new Emmy rules in Alan Sepinwall’s HitFix article and Todd VanDerWerff’s Vox piece.)

Theoretically, that’s an admirable idea. Power to the people!
In practice though, not everyone—and in fact virtually no one—watches the screeners. Since there are so many shows in competition, a lot of ATAS members and (now-)voters don’t know much about some shows on the ballot.
Things were so desperate that the Academy gave away Chromecasts to every member so they could stream the nominees’ episodes.
Even Andy Samberg himself mocked the mere idea of watching every major TV show on the air in the Emmys’ own opening song.

When you couple lack of nominee awareness with thousands voting based on name-recognition and not merit, you get one thing: sweeps.
No, not the ratings kind.

I’m talking a sweeping of important wins by singular “popular” shows. And for all intents and purposes, that’s what happened in all four major sections (Comedy/Limited/Variety/Drama).
When nominated respectively (with a couple exceptions), Veep, Olive Kitteridge, The Daily Show and Game of Thrones won all their awards.
HBO ended up shattering a record over 13 years long. Same with Game of Thrones, which beat The West Wing‘s previous win record with 12 Emmys (and all for its weakest season).
Even Peter Dinklage himself admitted on stage that Better Call Saul‘s Jonathan Banks deserved the win more than him.

What is this, the People’s Choice Awards? 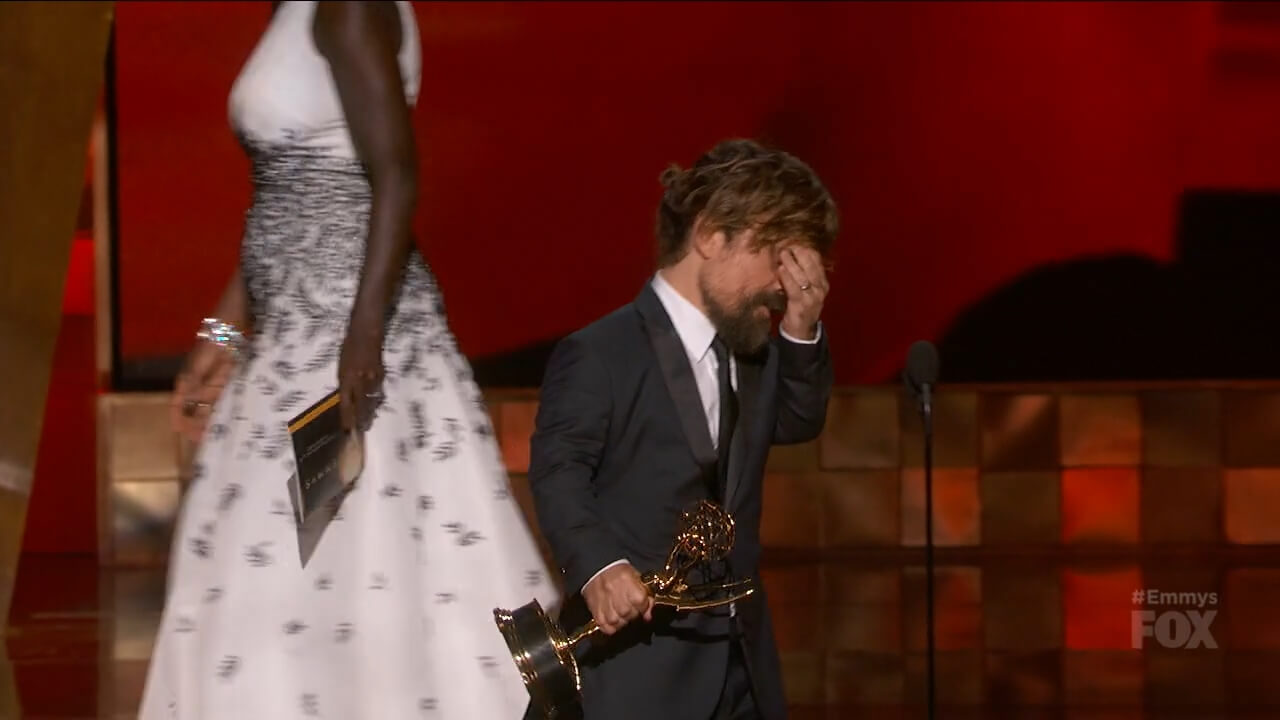 And did I mention “Mother’s Mercy” beat The Americans and three of Mad Men‘s finest episodes?
Shame!

Look, I understand having only a few dozen people decide who wins and loses isn’t the greatest.
But neither is putting the power in the hands of everyone without checking they actual can weigh merit in relation to all the nominees in play during that season.
When you hand that decision to 20,000 people, the award is watered down into an obvious “brand awareness” popularity contest instead of being based on qualitative judgments.

In fact, everything became so predictable with this year’s vote-switch that most people correctly predicted almost all winners of the major categories a while ago.
And here we are in the aftermath.

That isn’t to say there weren’t amazing winners among the lot.

I’m a fan of virtually all the acting wins.
Allison Janney was superb in her song rendition of her acceptance list. In fact, she should sing everyone else’s name-drops.
Congrats are equally in order to John Hamm (finally!) winning his long-overdue Emmy for Don Draper.
Viola Davis’ and Uzo Aduba’s speeches were in their own right fantastic, and historic. 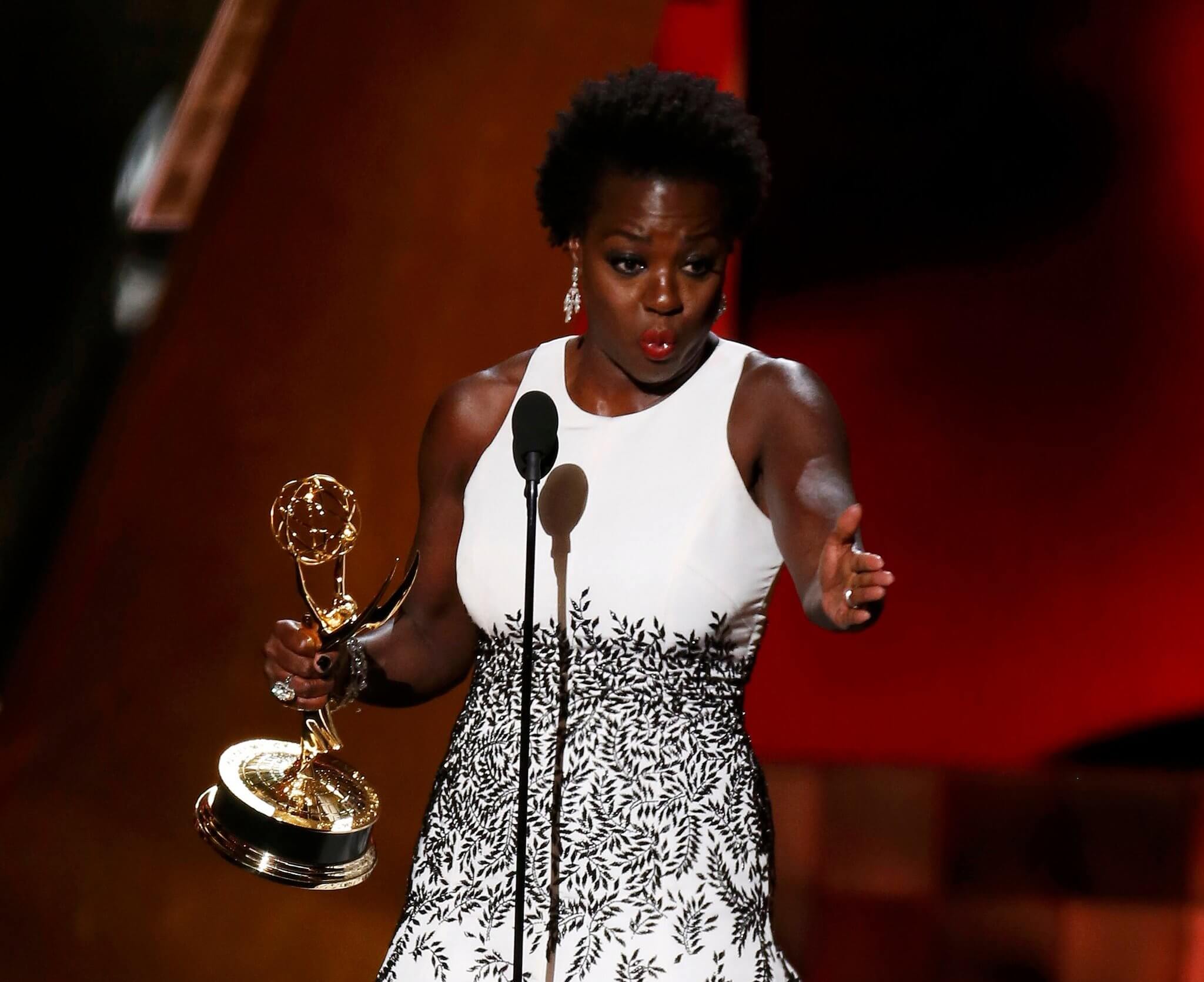 I do have to voice my disappointment in Amy Poehler’s lack of Emmy for Leslie Knope, an already-iconic TV character. Hell, it’s even a travesty that Parks and Recreation has been completely shut out of the Emmys (how has Nick Offerman never been nominated for his role as Ron Swanson?).

And no “Emmy acting” discussion would be complete without me mentioning Orphan Black‘s Tatiana Maslany also getting snubbed by the grand prize.
To be fair, who actually expected a win. We got lucky she was even shown on screen.
In a very dull, taped bit.
Ugh.

As for the other winners, it was great to hear Jon Stewart say goodbye to the ceremony (especially after he, with Colbert, gave us some amazing moments over the years).

Jimmy Kimmel was kind of a dick to the nominees and future winner of the best comedy lead actor category he was presenting.
Not only did he jerk the whole audience around, he destroyed and chewed a key piece of memorabilia for the winner: the Emmy winner’s envelope.
Maybe Jeffrey Tambor wanted to frame the envelope with his name written on it? All he got was that heavy golden trophy! 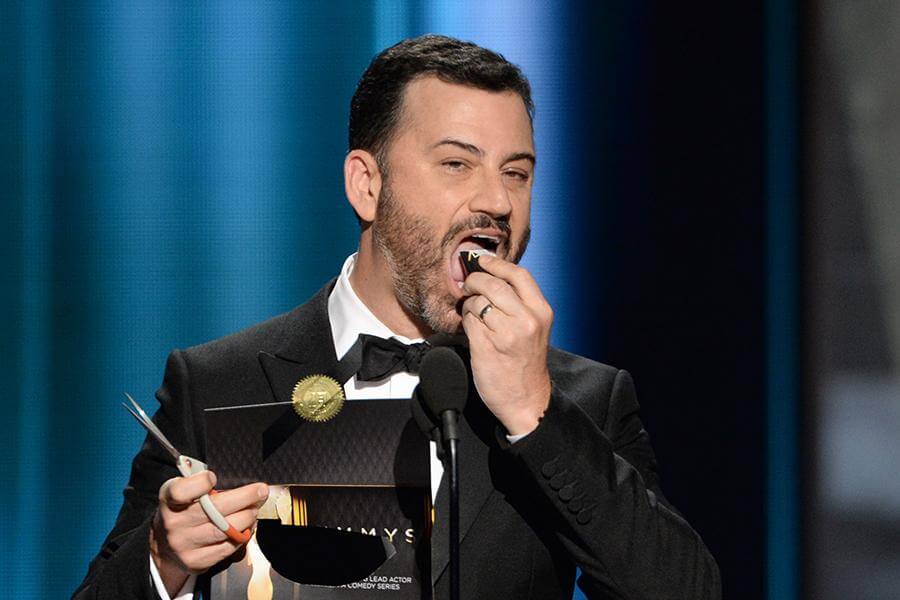 Surprisingly, there weren’t any big “show-stopping” moments. It was overall a very low-key ceremony.
I enjoyed Andy Samberg’s stand-up routine, although he seemed pretty nervous during that opening monologue. I can’t blame it all on him—the audience was frigid (despite the 100-degree heat). People were probably trying to cool off and enjoy the AC after the 100-degree weather we’ve been having.
With that said, they had Scott Aukerman and the Lonely Island, yet the only other “moment” they were able to pull was that “Emmys Can Kill” song.
Okay. 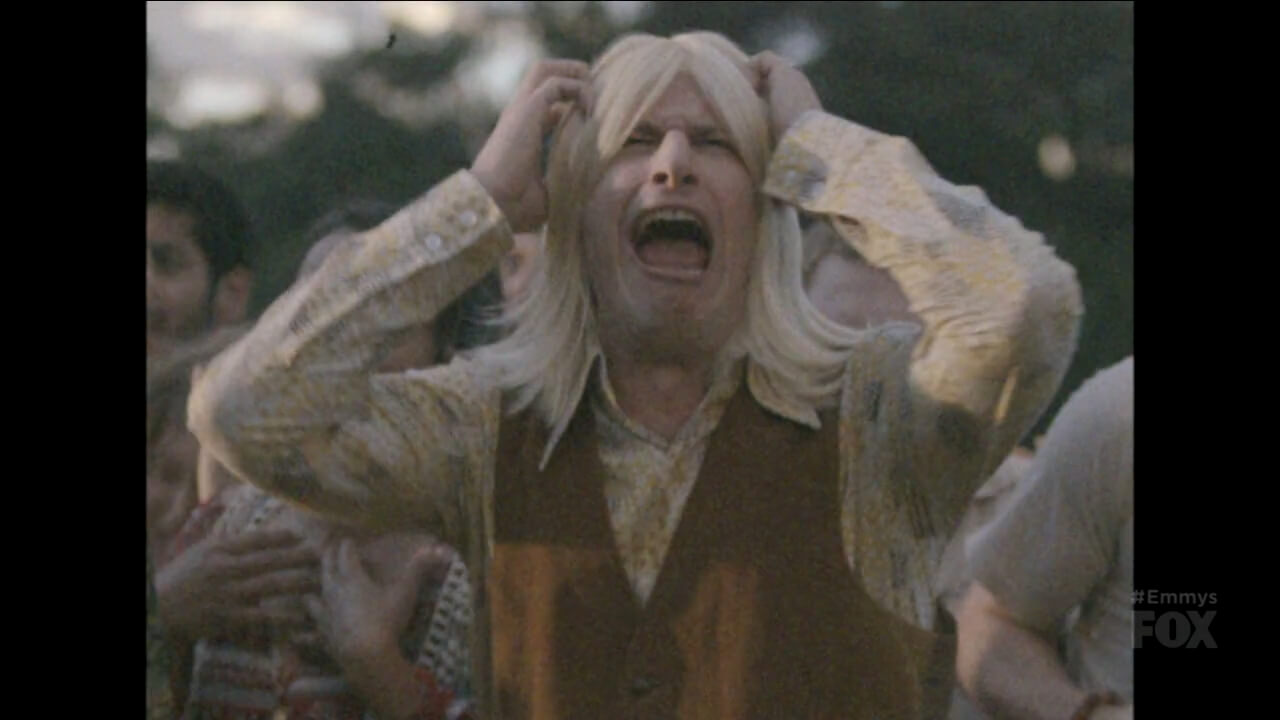 The one “big” show thing that happened was the laughable (and controversial) spoiler reel that aired.

Whose idea was it to show literally every final scene of this past year’s series finales?

I also did appreciate the last moments of the show, specifically seeing Tracey Morgan back on his feet and ready for the TV world. 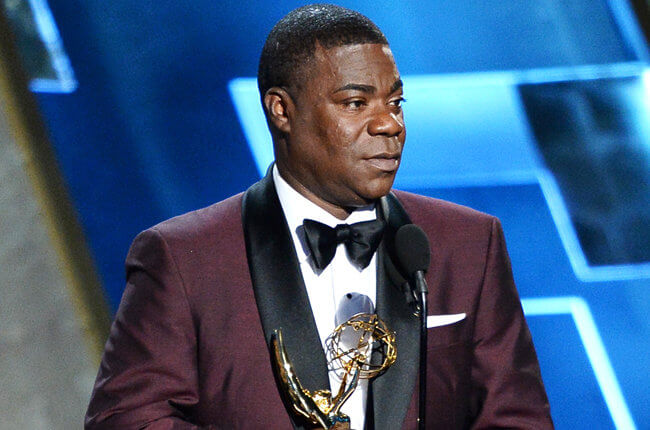 Overall, I’m not annoyed by this year’s Emmys as much as I’m disappointed in the predictable sweep outcome of this whole voting mess.

I really hope they either switch back to previous years’ model, or at least have some control over the voting process.
An idea would be to limit what you can vote for by having a basic way to verify actual knowledge of all nominees in the categories you’re voting for.

Until that happens, brand awareness will be the name of the game. Or to put it in other words: the Emmy Awards will entirely be the popularity contest they were always on the verge of becoming.